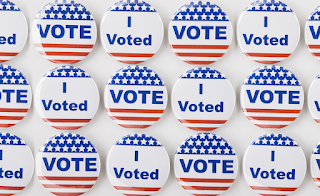 [Image Description: A grid of buttons saying I Voted or Vote.]

On Voting Day last year, I sat at a small table in the front lobby of the Carol Rines Center, where my city normally provides social services. On that day, it served as a polling location for Ward 4 and my job, as a poll greeter and Spanish translator, was to make sure that every person who came in felt safe, comfortable, and knowledgeable about the process of voting, no matter their party affiliation. I was also tasked with reminding people that they could not wear any sort of political propaganda, as New Hampshire follows a strict Electioneering law, so that there is zero-tolerance for voter intimidation. As residents came in, I reminded them that if they needed to register to vote, they could do so at our location. If residents were houseless, I reminded them that in the state of New Hampshire, one does not have to have a State ID in order to vote, only to execute a challenged voter affidavit (Vote Riders). I chatted with people, young and old, of all races and ethnicities, about their reasons for voting. Some were deeply frustrated, others were excited because it was their first time voting. For non-English speaking residents, I spoke to them slowly and plainly, sometimes drawing out pictures or using hand gestures so that they would understand what to do and where.

I know that I didn’t agree with some of the voters who came in that day, like one man I gave Spanish-language assistance to. I explained to him how to fill out the ballot, although I did not support the bubbles he filled in. I knew my duty that day was to provide the fundamental, equal right to vote and to decide our Local, Statewide, and National future. It was my duty to uphold the words of President Obama and Stacy Abrams, who in her book Our Time is Now: Purpose and the Fight for a Fair America wrote, “Voting is a constitutional right in the United States, a right that has been reiterated three separate times via constitutional amendment”.

In the same book, Abrams also writes about attempts at limiting exercises of this constitutional right, from the racism of the Electoral College to the Voter Suppression laws of the 60s to today where we have experienced a drastically sharp incline in Gerrymandering. In 2021, voter districts will be re-marked based on the 2020 election. Although Section 2 of the Voting Rights Act of 1965 made racial Gerrymandering against the law, the Supreme Court decided against outlawing Partisan Gerrymandering [trying to create political districts that favor one party and hurt the other], and states who have historically employed racial Gerrymandering (Texas, Florida, North Carolina, etc.), are free to create their own districts without regulation from the Department of Justice. Suppression of an individual’s vote exists in many subtle ways, from the actual prohibition of that vote, to attempts at diminishing a vote until it means nothing at all. And it is marginalized people who are always the targets.

The political process has never been accessible to all. Our democracy was founded as a democracy for white, Protestant, wealthy, men. Slowly, strides have been made to address this. Formerly incarcerated people can now vote in states like Florida, and there are only 11 states where they lose their right to vote indefinitely. Yet how do we get that number to 0? How do we ensure that every community is fully equipped to educate, support, and uplift their residents in their voting journey? In my state of New Hampshire, 40,817 people registered to vote on the day of the election. I helped just a tiny fraction of those people, people who before either couldn’t or wouldn’t vote, but who believed that it was time to use their constitutional voice to change the order, to decide their own country’s outcome. For the man I helped, whose people have been historically denied the right to vote, who have had to sidestep bureaucracy and racist policies, in order to use their voice, the work continues on. My teacher brought her 3-year-old daughter with her to vote and explained to her that their women ancestors hadn’t had the same opportunity. “Always vote,” she told her, “because in many places you can’t even vote at all.” Thus the work continues.