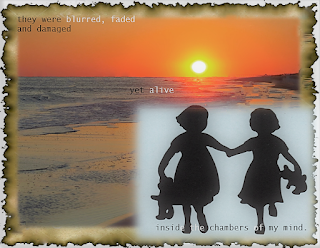 [Image Description: A picture of a sunset at a beach with silhouettes of two children. Over it is the words: they were blurred, faded and damaged yet alive inside the chambers of my mind]

fire from the golden medallion

reaching out towards the earth

pouring in through slits of the horizon

where the clouds don’t cover the lands

and the mountain tops don’t reach,

kissed my forehead and tanned my hands

and then bounced off the photograph

that was held in the clasp of my sweaty palms.

tested by the toughest times

and the yellowness set into the frame

made the faces in the picture seem more alive.

The two girls-hand in hand

their soft faces lit up by stunning smiles

looked directly into the camera

as if staring straight into my eyes.

Maybe it was a mirror, one its kind-

for I was able to look into my eyes

from so many years ago

yet, not fully recognise the little girl

I saw in the faded photo.

Amid the smudged background

and the shoreline of the beach

I could make out my father’s figure-

admiring his two daughters by the beach.

My mother behind the lens

captured this moment into a frame

yet was missing from the shot

who were somehow silhouettes in my past

and yet, nothing more than that.

Sitting on the same spot at the beach

looking at the sun fall into the horizon

as if simply sliding by into another world

carrying away the day’s secrets,

and the clouds breaking and crumbling-

colouring the sky with varied hues,

all whilst my hands held the course grains of the sand

and I paced into the past and ran back as fast

into the present world of mine.

The gentle wind touched my forehead

and the water splashed onto my feet

What if these were the same droplets of water

that were captured in the photograph?

Maybe, I held the same sand in my hands too.

But the people in the frame-

they couldn’t ever remain preserved in that time.

They were simply remnants of my past and

they were blurred, faded and damaged,

inside the chambers of my mind.

Tanvi Nagar is a student of class 12 at DPS Gurgaon and loves to write, read and travel. She has been published by The Times of India, The Hindustan Times, The Ice Lolly Review, Cathartic Youth Lit Mag, Anti-Heroin Chic, The Weight Journal and Risen Zine among others. She has won the Eye Level Literary Award’18 by Daekyo, South Korea and Millennial Essay Writing Contest by UNESCO. She hopes that writing can change the world one day! Her website is- tanvinagar.com.