Interivew: Nautics on the internet, professionalism, and indie rock 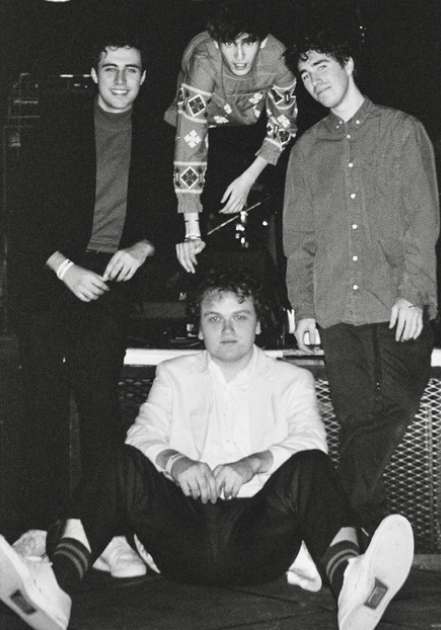 [Image Description: A black and white photo of the members of Nautics.] Source.

Nautics is a NYC-based indie rock band. Find them on Instagram and Spotify.

The music industry has been changing for a while now; more and more artists find themselves using platforms like Bandcamp as a way to promote their music, whether they’re established indie darlings like Phoebe Bridgers - who used Bandcamp to temporarily release a cover of ‘Iris’ by the Goo-Goo Dolls after the 2020 U.S. Presidential Election, - or up-and-coming young acts. Nautics, an indie rock band that has released several singles and EPs on the platform, told me that “with the advent of the internet, there is an allowance to cut out the ‘industry’ part of music.” This is a guiding ethos for the band, who have a lot to say about how the internet has opened doors for them, saying that without the avenues opened up by the internet, they “wouldn't have been able to reach the type of people and the amount that we reach today.”

One of the things that came up the most in our conversation was the way in which using the internet as a way to promote and distribute music creates a more direct connection with listeners. They made it clear that for them, using the internet and social media was “less a tool for industry and more a way to expand our community as a band.” This comes from the ways in which music and interaction have changed, and was described to me as “a special opportunity we get as artists in the 21st century.” There’s definitely something about the current moment that gives a direct, and much less mediated link to artists of all disciplines, and those that engage with their work; you can be followed on Twitter or Instagram and people will be able to comment on you and your working, knowing that you’ll see it. It’s become - for bands both big and small - something of a necessity to plaster yourself all over the internet in order to promote your work, so it’s no wonder that the band feels “you need to have a bit of an ego to even imagine someone will listen to your music.”

Nautic’s music is indie rock, but not as you might have heard it before; it’s a little sly and self-aware, not always moving to the same macho rhythms that the genre might be known for. One of the band’s most striking lines, from the song ‘Cosmonaut’ is “I used to be a cosmonaut/Now I’m in a shitty/Teen rock band.” The line is clever, funny, a little sad. So much of the ethos and musical style of the band is rooted in a non-pretentious honesty, refreshing in both its simplicity and power. The band’s desire to keep exploring new musical styles is also at the root of their latest single ‘Don’t Wanna Be Like This,’ which the band describe as being an experiment in production that aims to create “this atmosphere of nostalgia for a time that never was,” while using digitally manipulated vocals and a more melancholic approach than  some of their other songs.

This continued experimentation in production and their  ever-widening musical range is rooted in what the band described as a specific privilege that comes with being in a position where you’re able to make art. They told me that “the responsibility comes from having a platform, no matter how small. It’s the performers job to create an open and safe environment, to the best of their ability. You aren't any better than the people you perform for, but you are setting an example of how to behave, so set a good example. Comfort and kindness.”

As the distribution - and consumption - of music moves to an increasingly digital platform, where you have the ability to message creators as long as you have your phone in your hand, the platform that comes with creativity is becoming more important than ever. The connection is immediate, even intimate. The internet has always been talked about as something that levels the playing field. More than that, it can close the gap between artists and their audience. The way that Nautics approach their creative process, and the reach that this gives them, shows that the music industry is continuing to change, and the bands with the brightest futures are going to be the ones that change with it.