Racism in the Capitol Riots 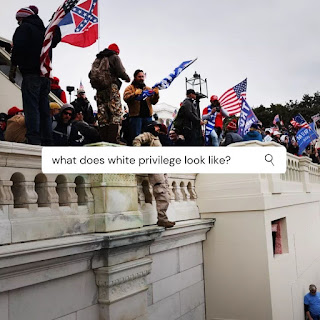 [Image Description: Search Bar with Typed Question: “what does white privilege look like?”. Background features a photo of rioters storming the Capitol on January 6th, 2021.]

In the mid-afternoon of January 6th 2021, people around the world watched play out what many of us living in America already knew: the United States is a playground for white supremacist fuckery. Chants of Black Lives Matter being a terrorist movement full of nothing but hoodlums and thugs fall suspiciously silent now in light of what happened at the Capitol.

After Trump’s rally where he once again spread vitriolic fallacies about the November 2020 election and its supposed unfairness, many in the crowd, hyped up by the president’s explosive rhetoric, felt convinced that their fear-filled leader stood a chance of overturning his loss. All his steadfast warriors would have to do is embrace their role in the fight for “true justice” and clear the path for their general’s second term. So, in a stunning yet unsurprising turn of events, the group stormed the Capitol to prevent Joe Biden’s confirmation. Were we really surprised?

Unlike presidents before him, Trump didn’t even try to paint a fractured illusion of American unity or trust in the democratic system; rather, he lit a match full of dog whistles and threw it on the gas-soaked frustrations of his minions. Recklessly emboldened, this group threw a tantrum, running around vandalizing Senate offices, hanging from the House ceiling, and, most notably, posting up with a confederate flag in the atrium of the building.

The ignorance and audacity continue to be appalling as reports of the events wear on. When a figurehead is legally called to relinquish his office and chooses instead to mobilize his radicalized base to attack a government building, arrests are required--starting at the top. At the time of this writing, eighty-two people have been arrested, but Trump is still in his post as president.

Behavior such as this--raiding the Capitol, stealing government property, etc.--would be considered a terrorist attack if the crowd had looked different. Black people in this country have known for over four hundred years that their mere existence can easily get them killed, especially where police are involved. Do we need to get into examples of this? Jogging, sleeping, walking with Arizona Ice Tea, playing in the front yard, saying “I can’t breathe” —all these and much less have ended in Black bodies buried. When we send our grief and rage to the street in protest, we’re met with tear gas, rubber bullets, and metal batons.

Yet when the bodies in question are white, able, and angry, they’re considered merely protesters that went too far. When white folx sack the Capitol, police officers take selfies with them and allow them to pass with timid rebukes. For all intents and purposes, it seemed as though police were there to serve and protect the rioters rather than respond to a national security threat!

These rioters, the same people who proclaim Blue Lives Matter in BLM conversations, clearly demonstrated the opposite on Wednesday, showing the flagrancy of white privilege in this country. It’s impossible to ignore the fact that if anyone of them were Black, the story would have ended much differently.

This is a moment in history for deep analysis: of how we talk about whiteness when confronted with police, of how we respond to domestic terrorism as individuals and as a state, and most importantly, how we hold police accountable when their response does not match the event in question.

It’s a moment to reflect on the phrasing Blue Lives Matter; that it is, in effect, a dog whistle that conflates the importance of a militarized institution with the importance of the actual, full, dynamic lives of Black people. It’s a moment to think about the impact of this militarized institution when it comes into contact with Blackness--whether in body, consciousness, or any manifestation therein--and how it reacts with unabashed violence and impunity. It’s a moment to think about what you, dear reader, really mean when you say Black Lives Matter, yet fell silent on January 6th.

Ty Wilson is a writer from Montgomery, Alabama. They’re a Pisces BEF (Black Enby Femme) with a deep love of tarot, coffee, books that make them cry, and everybody Black. You can find them on the internet writing angsty poetry or reminding everyone about their deep love of James Baldwin and Audre Lorde. You can find their work here: tyranicole.blog or follow their Instagram @terrific_tyrista for awkward yet endearing selfies.