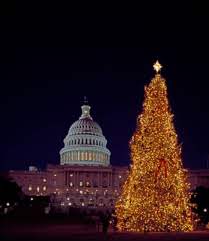 [Image Description: A lit Christmas tree in front of the US Capitol Building] Source.

This article was originally published on Jewish Women, Amplified, the blog of the Jewish Women’s Archive, and was written as part of the Rising Voices Fellowship.

Each December, my former high school's music department puts on a winter concert which inevitably features Christmas music. Shortly after the concert, the school hosts a week-long “Secret Santa,” at the end of which presents are stacked under a Christmas tree in the school’s lobby. Then there is a week-long vacation that sometimes includes Hanukkah and always includes Christmas.

None of these events are out of place in an American public school. Living in the United States means living in a country where the government was created by Christians and where every President has been a Christian. It means living in a country where school vacations are structured around Christian holidays, where school winter band concerts and retail outlets inevitably play Christmas music, and where Christmas symbols are seen as secular; in December 1984, in the case of Lynch v. Donelly, the Supreme Court ruled that a nativity display put up by the city of Pawtucket, Rhode Island was legal because it did not promote a specific religion and instead served the secular purpose of marking a national holiday: Christmas.

The United States Constitution clearly establishes the separation of church and state, but with the decision in Lynch v. Donelly, the nation’s highest court decided that Christianity is so ingrained in American society that, to some extent, this line can be blurred. As the holiday season approaches, this conflict is in full view, especially for non-Christian Americans. As rage persists over the so-called “War on Christmas,” religious minorities are forced to ask themselves: what does it mean to exist in a country that purports secularity but considers Christianity to be the default?

This default status comes from somewhere: over 70% of Americans identify as Christian. Only 5.9%, identify as any other religion, meaning about 23% are not affiliated with any religion. In the United States, and any country with such a strong single religious majority, to be unaffiliated religiously typically means to be culturally aligned with the majority, in this case Christianity, and to perceive it as the default and the basis for views of religion.

Those who are not members of a minority religion must be aware of the power that they gain from this default mentality. There is inherent power in being able to be yourself and still conform. There is inherent power in sharing your traditions with the masses. This is a privilege that many people don’t recognize because it’s seen as the default experience. And it’s not only a privilege that religious minorities don’t have; it can be very damaging to us.

For the most part, in the United States today, Jews are free to practice our religion and traditions. We have legal religious freedom, but we do not have true cultural freedom. While I am able to practice within our society, the society is not made for me. There is a constant pressure that makes it harder to exist as a minority religion. During high school, I participated in my school’s annual “Secret Santa” gift exchange because it was a part of being a member of my school community and my friend group. It was a holiday tradition I valued, and I didn't feel like I was betraying my religious values by participating; but I was being forced to make that choice. If I did feel uncomfortable enough to not participate, I would have had to separate myself from my school community because of my religion.

This divide also has implications on my learning. Up until my senior year, my school held classes on Yom Kippur and Rosh Hashanah, the holiest days of the Jewish calendar. Although I had the option to not attend school on those days, I was still presented with a choice between my learning and my religion, a choice that a Christian student would virtually never have to think about in the United States.

This pressure is not only an inequitable inconvenience for those who practice minority religions, it’s a danger to our survival. As a whole, the American Jewish community has assimilated in many ways. This is not inherently a negative thing; but, when it reaches a certain degree, assimilation can be a great danger to Jewish identity and the Jewish community. Outside pressure makes it that much harder for many Jews to remain connected to their culture, and that has long-lasting implications on our community.

The cultural dominance of Christianity is also harmful because it allows Christianity to exert influence on our political sphere and can lead to cultural hostility towards minority religious beliefs and practices. For many religious minorities, it does not feel like a given that there always is or will be freedom of religion. We must constantly fight for our rights because the alternative is the loss of culture and community, and a political sphere that allows for the type of hatred that can lead to vandalism, violent attacks, and even genocide.

In a country with such a strong Christian majority, some degree of integration of Christianity into the general society is inevitable. However, the religious majority and the government still have a responsibility to be conscious in order to make our society as inclusive as possible. Part of this essay is a call to do better, and part of it is simply a call to pay more attention. A call to be aware of and push-back on the ways in which a Christian perspective dominates our society and the ways in which this could be changed. Americans who are not religious minorities must acknowledge the power that they hold before participating in discussions about the separation of church and state, and before they can form an understanding of what it means to be Jewish, or any other religious minority, in America.