Interview: Destiny Harris on going to an HBCU (3/3) 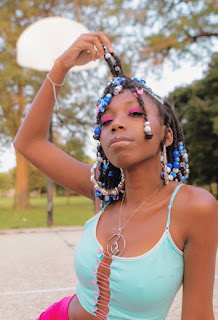 [Image Description: Destiny Harris outside in a blue tank top and hoop earrings and holding up a strand of her hair with beads in it]

This piece is part of a three-part interview. Click the links below to read more.

This is an interview with Destiny Harris (she/her, they/them, anything said with love and respect). Destiny is a Black queer artist and organizer from the westside of Chicago and a student at Howard University. You can find Destiny on Instagram @whole.hearted.hoodlum and selling handmade wire earrings @dipsandcoils.

This interview has been lightly edited for clarity.

Destiny: So, I’ve lived in two neighbors in my life, moving back and forth, and they’re both predominantly Black. So I grew up around Black people, when I went to elementary school and middle school, it was strictly Black people. However, when I went to high school, I went to high school kinda near the downtown area where the affluent white people live in [Chicago]. It was selective enrollment and magnet so extremely, extremely resourced.

All of the resources that, like, the kids in my neighborhood could imagine, this school had. And also it’s one of the most diverse schools its the nation. So it’s, like, 25% Black, 25% Asian, 25% white, and, obviously, that was a cultural shock. I was exposed to a lot of new people, new religions, spaces that I hadn’t seen before. And that was a unique experience, eye-opening.

I experienced a lot of, you know, racism and things that come with interacting with new people. My high school sold itself on the fact that it was, like, really diverse. “Come to our school! We’re super diverse!” Very diverse, not very integrated, right. Literally, it was like Chicago. Chicago is super fucking diverse but, like, extremely segregated. Like you can see the difference when driving down streets.

Also going to an HBCU was definitely different coming from a high school that was extremely well-resourced, because HBCUs are extremely under-funded. I had all this privilege, so now it’s like, we going back to our roots, you know. I was met with a very unapologetically Black and also unapologetically queer space. 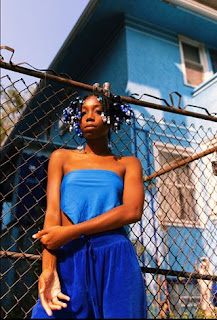 Being in DC is also really interesting. When I wanted to go to Howard I was like, oh my gosh, I’m gonna love Howard, oh my gosh, I’m gonna hate DC (laughs). I told myself, I am never leaving campus. I am extremely arrogant about being from Chicago, so whenever I’m going anywhere, I’m like I already know I’m gonna be unimpressed.

You know, DC used to be called the chocolate city because of the strong presence of Black people and Black culture. But now its just gentrification and I feel like the only people who live there are students or people who work for the government because all the people who had lived there have been pushed out.

Howard is great but there are a lot of institutional issues I’ve been organizing against. Because of the lack of funding, it has to make do with a limited amount of people it has working in its financial aid office and in the housing department. Also a lot of organizing with folks on campus around issues happening in DC.

Like I said, it's been one of the best experiences I’ve had and one of the best decisions I’ve made to be in a place that has historically cultivated some of the most prominent Black people like fucking Thurgood Marshall and Zora Neale Hurston and Black Panther himself.