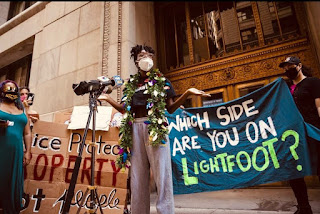 [Image Description: Destiny Harris wearing a mask and scarf and standing in front of a microphone and banners reading "Which Side Are You on Lightfoot?" and "Police Protect Property not People"]

This piece is part of a three-part interview. Click the links below to read more.

On Her Business, Art, & Organizing |On going to an HBCU

This is an interview with Destiny Harris (she/her, they/them, anything said with love and respect). Destiny is a Black queer artist and organizer from the westside of Chicago and a student at Howard University. You can find Destiny on Instagram @whole.hearted.hoodlum and selling handmade wire earrings @dipsandcoils.

This interview has been lightly edited for clarity.

Ellanora: What does it mean to you to be a community organizer?

To be a community organizer just means to advocate for your community and to advocate for those marginalized groups and to call out these systems of oppression. And to not just call them out, but to actually be proactive and to work against them and work to abolish these systems. And to build community with similar folks and folks with have similar experiences as you. To work together in solidarity. 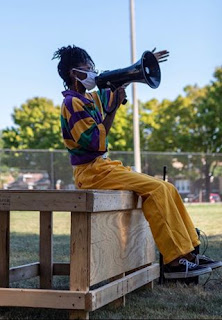 [Image Description: Destiny sitting on a bench, wearing a mask, yellow pants, and a striped shirt and speaking into a megaphone]

Ellanora: How did you first get involved in community organizing?

Destiny: So, I’m from Chicago. I’ve lived here all my life. Chicago has a very corrupt political scene, but also one of the largest communities of organizers and one of the most hard-driven communities of organizers. And on top of that, like, 99% of the organizing that occurs in this city is by young people, people under 25. A lot of cities look to us as an example because of how segregated we are, how diverse we are, how we organize. There’s a lot of things that make Chicago kind of, like, in the spotlight.

In middle school, Rahm Emanuel, who was the chief of staff for Barack Obama when he was president, became mayor. When he was in his first term, he closed down 54 schools. Which is wild to do in your first term as mayor. Not only that but almost 100% of the schools he closed down were in predominantly Black and brown neighborhoods, so very targeted and it left a lot of students displaced.

And my school was one of the schools that he had closed down.

And then, a few years later, the city all of the sudden has 95 million dollars to build a police training academy.

So we were like, what happened to the city being broke? You know, the city constantly invests in things on the affluent north side where all these white folk live, new parks, new trains, new train stations, new libraries. But the city doesn’t have any money to invest in the predominantly Black and brown neighborhoods, that are impoverished, that are discarded, where mostly young people live. It was a common theme, you know.

And, that was how I got involved. I was part of a whole youth campaign, the No Cop Academy campaign, that pushed back to say there is a lot more other stuff that the city needs to be investing in right now that is not policing. Especially, after Rahm Emannuel had helped cover up the Lequan McDonald case. 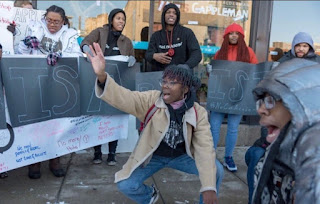 So, that was how I got to organizing; the no cop academy, Black and brown youth campaign, which basically like changed the narrative in Chicago that policing isn’t about community safety. Actually, community safety looks like investment in schools, in health clinics, in jobs, in grocery stores, in all this stuff that these discarded communities lack intentionally.

That’s how I got involved with community organizing because that’s something that was happening directly in my community. The police academy was being built right across the street. One of the reasons the mayor wanted a new police academy was because after Lequan McDonald had got killed, when the Department of Justice reviewed the case, they found that there was a lot of corruption within the Chicago police department and that it needed to be changed.

For example, a lot of the police training academies were near schools and they would have, like, raids, during school hours and not notify the schools, which you’re not supposed to do. There was a new police academy built right next to my school, right next to the high school that my parents went to.

Ellanora: Are there specific issues or people who inspire you?

Destiny: I’m continuing my work in police abolition, always. But I’m also doing work around environmental justice and how the climate change movement is very whitewashed, when in actuality, issues of environmental justice affect people of color the most. Because environmental issues just exasperate all the other issues of systematic oppression that we face. And also I’m doing work around anti-militarism and ending war. That’s the main campaigning I’m doing on my campus right now.