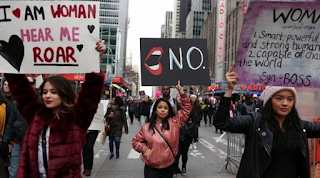 [Source. Image by Gabriela Bhaskar. Image description: Picture from a women's equality march. There are three predominant people in the image - one on the right hand side, holding a banner up with both hands, but it the writing can't be read as the sign is party cut off because of the positioning of the camera; someone in the middle, wearing a pink jacket and holding a sign up with one hand that says 'NO.' with an open mouth next to it; on the far left is someone holding up a sign with both hands reading 'I am a woman hear me ROAR'.] Reader submission by Margaux Bauerlein. Enough.
Underwear and dreams
in a ball on the floor
hidden away behind locked doors.
How many women will it take
for men to understand
Assault from Mistake?
That’s why we march and
That’s why we stand
High on the hill, making demands.
And while you scream to the sky
Not all men!
We must teach boys
If not now then when?
Before you roll your eyes away
take some time from your day,
put yourself in higher heels
To truly learn the way it feels
Like when your body’s not your own
When eyes devour parts not shown,
why women carry keys at night
Like animals attempt to flee or fight.
Father, friend, worker, brother,
Let there never be another.


“Enough” is a poem that woke me up in the middle of the night screaming, “I MUST BE WRITTEN!” This piece is heavily inspired by the #MeToo Movement--which I am a proud supporter of. Although great progress is being made, I feel an overwhelming frustration at the persistent misogyny and violence against women that still perpetuates American society. I wrote “Enough” in simple, blunt language in order to mimic a chant that might be heard at a protest or an internal mantra.
poetry