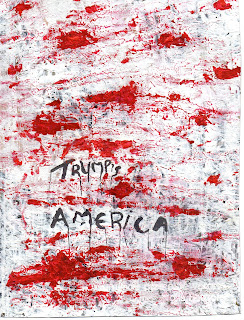 [Acrylic painting: red paint smeared across a white background, in the middle of the image, 'Trump's America' is written]

One twitch
One pull
One doubt and your gone,
But the world don’t stop, nah the world carries on.
One second and you’re dead,
‘Guns are used for safety’ you said.
And now he’s on the floor bleeding out
And I’m watching-
I wonder what’s going through your head.
I’m thinking about how he’s not coming home,
How I’m waiting for him to call to check I’m not alone.
I’m thinking about how one second he was alive,
And I blinked,
That’s it,
I blinked.
And when I opened my eyes I didn’t get to say goodbye
I keep thinking he’s running late,
Keep hearing him call my name when I leave the gate,
I keep thinking he’s gonna come back
But I know I shouldn’t wait,
Because he’s dead now,
You Killed Him,
See guns they don’t protect no one,
Their one purpose is to murder,
How could they possibly protect a life or help create some order,
They give a man power
and that’s a dangerous thing,
See power covers cower,
It’s a mask used to devour
There is no possible way a gun can save a life.
Either way it kills. See with a gun. You just pull once.
You see it you aim, but you just pull once.
One pull takes one life.
There’s no way around that,
One pull takes one life,
And now I’m left to survive that.
Ironic that people are afraid of guns,
But if I was to put a gun on a chair,
It wouldn’t shoot, it would only just stare.
So tell me; is it the gun that really scares
Or the hand that pulls the trigger and the mind that impaired?


Note from the author: I wrote this after hearing about the recent gun violence and school shootings in America and London. While I write in first person I have never personally experienced a tragedy like this, but the reason I chose to write in first person is because it makes it more personal.  It’s so easy to harm one another because we live in our own separate bubbles, when a man is shot he is simply that, a man, but given a glimpse into the consequences of your actions on someone else's life, you realise that he was a father, a brother or a friend. I believe any use of guns, whether it be by police, criminals or for ‘protection’ is wrong, the one purpose of a gun is to fire a bullet. Whether the person who pulls the trigger is seen as a hero or villain is simply a case of narrative, if you kill a killer what does that make you? Its an endless cycle of aggression and I have always found it ironic how destructive humans can be despite claiming to be smartest species in the world. Moreover how quick we are to blame our creations, the truth of the matter is, that guns are not necessarily the issue, left alone they are harmless, it is people who are the problem. And this is a problem that needs to be addressed, how it should be addressed is something I don’t know the answer to, but I do know that we need to stop answering violence with violence because it is a futile cycle.
poetry