How to survive January (and other resolutions)

on January 08, 2020
How to survive January, and other resolutions 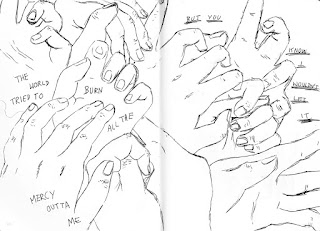 [Image description: Drawing of hands in contact with each other; fingers overlapping or touching, along with text (from left to right) reading "the world tried to burn all the mercy outta me but you know I wouldn't let it"]

By Sam Moore
Art by Amelia A J Foy

Don’t make any resolutions. They’re always a recipe for disaster, an act of setting expectations far too high for a year that’s only just begun, tying an unnecessary albatross around your neck, when there’s already enough weight on your shoulders as it is.

In spite of this, you resolve to cut as much meat out of your diet as possible. That’s the shorthand, because “pescetarian” sounds a little pretentious; it’s even greeted with the red underline of a typo on Microsoft Word, as if the application doesn’t recognise the ways in which language, and people, change. It probably doesn’t. That’s a lot to ask of a version of Word that’s just become ten years old.

You feel called out when you watch the second season of You, and hear the line “is it bisexual pescetarian week already?” because, given you aren’t even a week into the new year, that’s technically true. It’s a truth that you don’t know what to do with, so you accept it with a laugh, instead of laughing it off like you normally would.

The pescetarian thing is more about the nebulous act of “being healthy” than anything else, of finding energy and structure, avoiding the strange combination of being burnt out and spaced out that creeps up in the afternoon on slow workdays. You don’t make any resolutions about work, you just aim, in an uncertain way that’s synonymous with January, - not knowing what to do but feeling like you should do something - to do better this year, in spite of not really knowing what that means. On New Year’s Eve, you saw lots of jokes from Peep Show on Twitter and Instagram, all of them around the social pressure that comes with New Year’s Eve.

All rational people agree it’s a truth self-evident that it’s impossible to have a good time on New Year’s Eve. The pressure’s too immense. (Jesse Armstrong et al)

But that pressure isn’t just social; in spite of making jokes about it, and wanting to rename one of your group chats “New Year, New Meme” you still get caught up in the opportunity for reinvention that comes with another year. Even if you don’t act on it, or don’t tell people you’re making resolutions (after all, step one of this plan is not to make any), there’s something about it that’s tempting, the potential to make this year your year.

Because of the immense pressure, you don’t go out on New Year’s Eve. It’s a quiet night, but not a bad one by any stretch. Going out on New Year’s Eve is, like so many other things associated with it, an exercise in dashed expectations. Everywhere is too expensive, too busy, and in the end, not really worth it. You’ve never been the type to go out for New Year anyway; your family sound a little more surprised each year that it’s a night you’re still happy to spend in their company. You spend it with them; you’re happy to do so. And, in a way, you’re happy. You’ve always gotten on well with your family, and never really understood why it was all of your old friends went through adolescence seemingly determined to hate their parents. You say that your parents are friends, even as you hide things from them.

Bret Easton Ellis’ debut novel, Less Than Zero, was apparently first going to be titled Winter Break, and is about exactly that, inasmuch as it’s about anything. Clay, a college student comes home over winter to see his friends and barely see his absent parents (it isn’t a novel with a very strong adult presence; no parents or guardians were harmed in the writing of this book), as everything else seems to crumble to pieces around him, his old home on the West Coast is a world that’s still turning, even as it hurtles towards something approaching oblivion. Clay survives January, but that isn’t true of everyone he knows; and isn’t true of everyone at all.
On billboards, and seemingly everywhere else, one phrase recurs, calling out to Clay like a voice from beyond. Disappear here. (Bret Easton Ellis)

January is a time that’s ripe for disappearance; disappearing into old habits and old places, letting a version of yourself vanish in the hopes that a new, better one will emerge like a phoenix alongside the fireworks happening in London, fireworks that you watch on TV. There’s a sense of fear in January, the kind that comes with expectations, but in the end, it doesn’t materialise. Maybe because you go out of your way to avoid it, go out of your way not to build up expectations that you’re convinced the night, the resolutions, the year, will all fall short of. Fear never shows up and the party ends early. (Ibid)

This makes New Year sound sad, and it is, in a way. This kind of taking stock, the kind that’s mandatory, even if it’s just a mental inventory, will always have a kind melancholy attached to it. Looking back on where you’ve come from, and the places you got to, all of that will be imbued with the loss and longing of what’s been lost.

Teddy told me that in Greek, “nostalgia” literally means “the pain from an old wound.” (Matthew Weiner)

One of the ways to survive this sadness is to acknowledge it; to know where it comes from, to understand that not all changes will be painless, that even growing is something that can hurt.

Spend time with your parents, even as you’re asked too many questions that you don’t have answers for. Say “yeah,” in that slightly non-committal way when your mum says that “so many people must find each other with online dating these days.” Be thankful for the time that you spend together, for the things that you are asked, and the things that you’re not. Be grateful that you have parents and a home to go back to, as you look at statistics from a government report on figures from April to June 2019 (published in December of the same year) saying that “the number of households assessed by Local Authorities as either homeless or threatened with homelessness has increased by 11.4% from April to June 2018 to 68,170 this quarter.” (DCLG)

“The images I had were of people being driven mad by living in the city. Images of parents who were so hungry and unfulfilled that they ate their own children.” (Bret Easton Ellis)

You think about the election. It’s impossible not to, it was always going to come up in conversation one way or another. You think about a deceptive headline, leading with the idea that 1 fifth of people think they’ll be better off by the end of 2020, even when over a quarter of people expected things to get worse. Surviving January is one thing, but surviving the year is another entirely; you’re grateful that you’ll be able to do that, and always aware of the fact that it won’t be that easy for everyone. You wonder if the government will eat its own children, like Goya’s Saturn.

Winter doesn’t seem natural as a time for change, and the idea of it has obviously been reduced to jokes, punchlines around “new year new me,” and saying that this year being your year is already impossible after three or four or five days. But you still survive it, as best you can. You understand that the new year doesn’t have to be a new you, that renewal isn’t something that’s forced, but gradually worked towards. That any step in the right direction, no matter how small it might be, is still a step in the right direction.

You resolve, if anything, to simply be kinder to yourself. You’ll allow yourself to make mistakes, to be imperfect, to miss things up. You’re not exactly zen about it; after all, you didn’t make a resolution to meditate and do yoga. But still, you think about a folk poem quoted in a book that you’ve been reading.

Such is life
falling down seven times
but getting up eight. (Quoted by Roland Barthes)

It’s impossible to go through a year without falling down, to do everything perfectly, or to avoid being hurt. Like Lawrence with his hand over a candle, you try to teach yourself that the trick is not minding that it hurts. (Robert Bolt and Michael Wilson) You’ve been teaching yourself how to survive for years now, for what feels like forever. This year, you’re a little better at it than you were the year before, and, in the end, that’s all you can ever ask to be. A little better, a little stronger, a little more able to carry the weight on your shoulders or the albatross around your neck. You find strength in these things instead of weakness; so many martial arts are about using the strength or weight of your opponent or sparring partner or sensei against them, so you resolve to do this, to use the things around you that others might see as burdens as a source of strength, something that can carry you forward, instead of hold you back.