My Mylkshake Brings All the Boys to the Yard 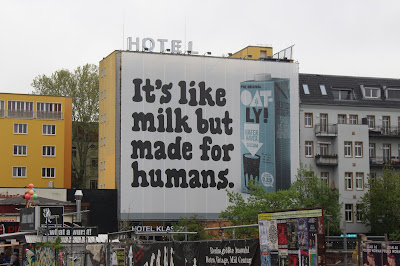 Source
[Image description: billboard in Berlin with an advert from Oatly that reads ‘It’s like milk but made for humans’ accompanied by an image by one of their products to the right]

Article and image by Sophie

On your cereal, in hot drinks, mixed through cake batter and in curries; milk is used in many ways. We typically use the white stuff from cows, but it has come to our attention that it actually has a big environmental impact - as well as being rather mean to steal from an animal. This means that plant milks have replaced heifer secretions and supermarkets have stocked up on a plethora of alternatives.

Not only are there beans, nuts and grains being adapted into milks, but they are having extra flavours added such as chocolate, vanilla, strawberry and even coffee. Alpro in particular has made these little takeaway cups of coffee-based plant milks that are sweet and give you that caffeine pick me up you crave. 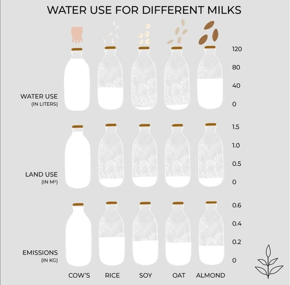 Source
[Image description: a visual to show the water use, land use and gas emissions for different milks]

Soya Milk
Soya is a bean that can be adapted in many ways to provide a plant substitute for animal products. It is incredibly versatile and is processed to be a lovely creamy, slightly yellow milk that works in many hot drinks and baking. You can get sweetened or unsweetened soya milk from most supermarkets and, from a general consensus among friends, the unsweetened one can taste slightly sour. One thing people find is that soya milk doesn’t react well with coffee and causes it to curdle which brings us onto the next option.

Oat Milk
Patented as the holy plant milk but for someone like me, a Coeliac, it doesn’t cover all bases for best substitute. However, it is super creamy therefore using it for making coffees is fantastic and companies like Oatly have created their own barista style oat milk made specifically for steaming and speciality coffee shop drinks. 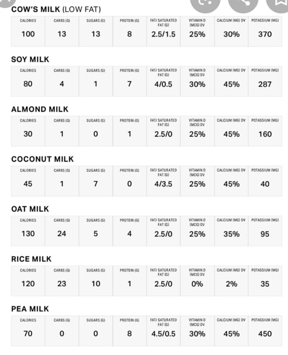 Rice Milk
Personally, I think that rice milk is quite watery and doesn’t have much substance to it. Although it is most fitting for those with different allergies or intolerances (unless of course you’re allergic to rice). The sweetened one is very sweet, but it is good in cereal and not that great in tea.

Almond Milk
At my old workplace we had this hot chocolate powder which was just delicious and once I switched to plant milk’s they got stepped up a level! Almond milk was my favourite tweak to the drink as it is super creamy and isn’t all that nutty which I respected as I’m not a big fan of that flavour. I think if you had it straight you would notice the nuttiness but it’s still fairly subtle. 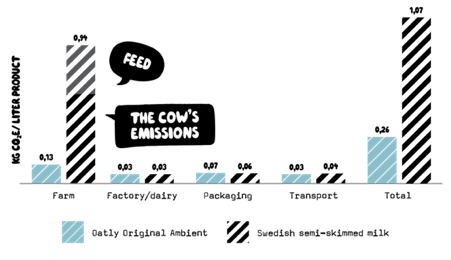 Coconut Milk
In continuation of that, coconut milk has a distinct flavour so it is also divine in hot chocolates – just like a Bounty chocolate bar!! It also works perfectly in curries to thicken them up and hold the flavour of the spices. This has been a basic ingredient to traditional curries for years however it makes a point that a lot of sauces could substitute dairy products for plant alternatives. You can get canned coconut milk and cream as well which has a different consistency to that in the plant milk section in the supermarkets, but all do the same job.

Various Plant Milks
It has been told that cashew milk makes incredible ice cream and I’m excited to try it out at some point! This among hazelnut and tiger nut milks are more expensive and may not be as readily available at this point in comparison to oat or soya.

A slightly controversial milk would be hemp; my friend has tried it and they reported it has a strange aftertaste, kind of like grass. It is said to have a texture more like cow’s milk and creates better latte art therefore proper coffee nerds and baristas enjoy using it as an alternative. Hazelnut is another choice that is quite creamy and would suit someone who is a fan of nutty flavour.

Other variations of plant milk include; pea, quinoa, spelt, peanut and macadamia. Although, there haven’t been many reports of these flavours and textures as they are more specialty options and not as readily available as others.

I thought I’d take it upon myself to do a price comparison of plant milk brands and supermarkets own attempts as free from milks. Lots of these have many variations as to what a customer might want for example sweetened or unsweetened, roasted or unroasted, wholebean etc so I’ve simplified it as best as I can so as to get a direct comparison.

As a side note, pretty much all plant milks are sold as 1 litre and all of this information is based on UK supermarkets and found online. Plant milks are available all over the world so I’m sure wherever you’re based there will be an option near you.

Most supermarkets have their own range of foods that don’t contain main allergens such as gluten, dairy, egg, etc. The following are the supermarkets individual ranges and the plant milks they have to offer:

There are a multitude of brands which are stocked by supermarkets and oddly they are priced differently depending on where you shop. Most UK shops sell Alpro, Rice Dream, Oatly, Blue Diamond, Innocent, Rude Health, Koko, Provitamil, Plenish and Califia Farms. Specialist brands are sold in health food shops and select supermarkets such as; Qwrkee, Lucy Bee, Good Hemp, Ecomil, The Mighty Society, Sproud, Vita Coco, Provamel and Rebel Kitchen.

I’ve picked Alpro to do a direct price comparison as it is the most readily available brand.

To summarise, if you buy a chilled milk it will be a few pence more expensive. Lidl comes up as the most affordable place to buy a shops own version of plant milks at an incredible 59p. It appears that Asda provides the best deal on Alpro milk and with their rollback scheme, a lot of them are reduced to £0.90. To contrast, Sainsburys is the most expensive place to buy Alpro from however, when they are on offer the pricier options, such as almond, are sold for £1.00. In addition, if you go to Iceland they often sell multipacks so you can get 6 Alpro soya one litre milks for £6.00.

This website is fabulous for comparing different plant milks in different supermarkets – super helpful for time and money saving.

Many of us enjoy getting a hot drink as we are out and about and it is great to see that coffee shops offer dairy alternatives for customers to pick and choose from. In most chain stores there is a surcharge for plant milks however, which is a little disappointing as it is likely to ward off people from making that change if they have to spend more. Places like Café Nero, Costa, Starbucks, Coffee #1, Pret A Manger and even Greggs offer at least one plant milk, mostly soya, and supply this with no extra charge. However, if you wish to have almond, oat or coconut milk the average extra cost is 40 - 50p.

A recent adaption to this has happened in Costa who aren’t charging extra for plant milk during this holiday period so hopefully they will extend this to their whole range in time to come. The majority of independent coffee shops I have been to offer soya and oat milk as a standard however those who specialise in vegan food and drink are likely to have a wider range to select from.

If you fancied celebrating World Plant Milk Day, you’ll have to wait till summer on the 22nd August where all the bean, grain and nut milks are rejoiced. If you wish to further your research into supermarket options visit Vegan Womble who constantly update their site on new vegan finds.
climate change go vegan milk plant based plant milk plants sophie tips vegan