A Brief Introduction to the War on Drugs 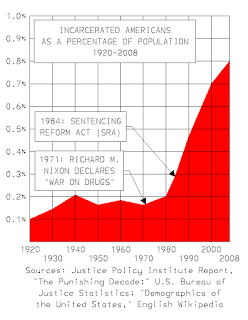 Source.
[Image Description: A graph showing an increase in the U.S. prison population from under 0.2% of the population to about 0.8% between the years of 1970 and 2008. The graph indicates that this spike coincides with the beginning of the War on Drugs.]

Author’s Note: This piece is part of a series on the War on Drugs; if you are interested in contributing to the series or publishing accompanying artwork or creative pieces please let us know! (Contact information will be listed at the end of the piece.)

As of 2019, the United States has a prison population of about 2.3 million people. That’s 698 incarcerated people per 100,000 residents. And that doesn’t include the estimated 4.5 million people under community supervision, i.e. probation or parole. Of this, 1 in 5 is in jail for a nonviolent drug offense. The total number of people incarcerated for drug crimes has increased by 1,000 percent since 1980.

Why is this? Like any issue, there are multiple explanations but experts agree that a primary cause has been the War on Drugs, a government initiative officially launched by President Richard Nixon in June 1971 and greatly expanded by President Ronald Reagan in the 1980s. It was meant to address illegal drug use through a ‘tough on crime’ approach including mandatory minimum sentences and increased funding for drug law enforcement (Britannica).

This initiative came despite the fact that drug use was actually declining at the time it began. Because of this, the plan was met with resistance and confusion from many, including law enforcement and even some conservative commentators. To encourage law enforcement participation the federal government gave “[h]uge cash grants...to those law enforcement agencies that were willing to make drug-law enforcement a top priority.” These jurisdictions also received other forms of aid such as training, intelligence, technical support, and military-grade equipment from the Pentagon, millions of pieces of which were distributed in the late ’90s. Along with the militarization of police departments, this time period also saw the usage of SWAT teams in unprecedented amounts. While SWAT teams had originated in the 1960s, they were originally used primarily in extreme situations. This changed in the ‘80s, as the general focus of law enforcement shifted towards drug crime enforcement. The use of SWAT teams increased dramatically from a few hundred uses nationally in 1972 to forty thousand in 2001, with the majority of these usages as part of serving narcotics warrants.1

The War on Drugs did not only shift nationwide law enforcement dramatically towards drug crime and increase prison populationsーit did so in a way that disproportionately harmed People of Color. Today, while “the majority of illegal drug users and dealers nationwide are white, three-fourths of all people imprisoned for drug offenses have been black or Latino”.2 This racial and racist disparity has been able to flourish because of the cyclical nature of poverty and imprisonment, because bias has been able to operate unchecked in the criminal justice system, and it seems because of a conscious effort by the government to criminalize Black people. In a 1994 interview, a top Nixon official John Ehrlichman told reporter John Baum:

The Nixon campaign in 1968, and the Nixon White House after that, had two enemies: the antiwar left and black people. You understand what I'm saying? We knew we couldn't make it illegal to be either against the war or black, but by getting the public to associate the hippies with marijuana and blacks with heroin, and then criminalizing both heavily, we could disrupt those communities. We could arrest their leaders, raid their homes, break up their meetings, and vilify them night after night on the evening news. Did we know we were lying about the drugs? Of course we did.

The War on Drugsーand more broadly the politics, policies, and media coverage surrounding how the government addresses crime and drugsーis a complicated piece of modern American politics and history that is often not well-enough understood. However, it is essential in understanding the ways in which our modern society has formed, particularly the ways in which institutions have evolved to continue the marginalization of Black and brown Americans.

//Reminder to contact us if you’re interested in contributing to the series: DM us at @ellanoruhhh or @risenzine or email ellarlerner@gmail.com//

1.   This paragraph was pulled heavily from “The New Jim Crow” by Michelle Alexander (pages 73-75), an academic book on the War on Drugs and mass incarceration. More information about the book can be found here.
2.   Alexander, 98.