We Support You - Sam Smith 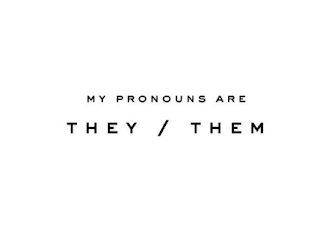 Source.
[Image description: A white background with black text, ‘my pronouns are they/them’ is in capital letters.]
Article by Emily Bourne.
Sam Smith came out as non-binary earlier this year, but still wanted to use he/him pronouns at that time. Now, in the last week, they have told their fans to refer to them using 'they/them' pronouns.
Smith wrote in a Twitter thread, “after a lifetime of being at war with my gender I’ve decided to embrace myself for who I am, inside and out” and hoping that people “can see me like I see myself now.”
“I’m so excited and privileged to be surrounded by people that support me in this decision but I’ve been very nervous about announcing this because I care too much about what people think.”


Today is a good day so here goes. I’ve decided I am changing my pronouns to THEY/THEM ❤ after a lifetime of being at war with my gender I’ve decided to embrace myself for who I am, inside and out... pic.twitter.com/IVoLTYbAWd
— Sam Smith (@samsmith) 13 September 2019

They acknowledged that that many would make mistakes involving misgendering, but asked that people “please please try” to use the their correct pronouns.
They noted that they were not yet at a stage “to eloquently speak at length about what it means to be non binary”, but referred followers to top activists in the non-binary and trans community who have helped them understand themself more clearly.
*
However, despite the joy Smith must be feeling at being able to share their true identity with their fans, they must also be frustrated. In an article The Sun wrote about Sam Smith announcing his pronouns to be ‘they/them’ (we encourage you not to follow the link and give them clicks unless to source-check), the writer misgenders them throughout. Misgendering is an awful experience - so, please check up on your trans and non-binary friends this week as they will also be feeling the impact of Smith’s announcement.
*
Sam - we love and support you!
*
For our readers, if you’d like to learn more about being non-binary, queer or just LGBTQI+ education in general, I’ve provided the names of some queer people who use their platform to educate people.
Emily bourne floteren lgbt lgbtqi music non binary pronouns queer sam smith they them trans transgender