Growing Up Bisexual (B Visibility Day '19) 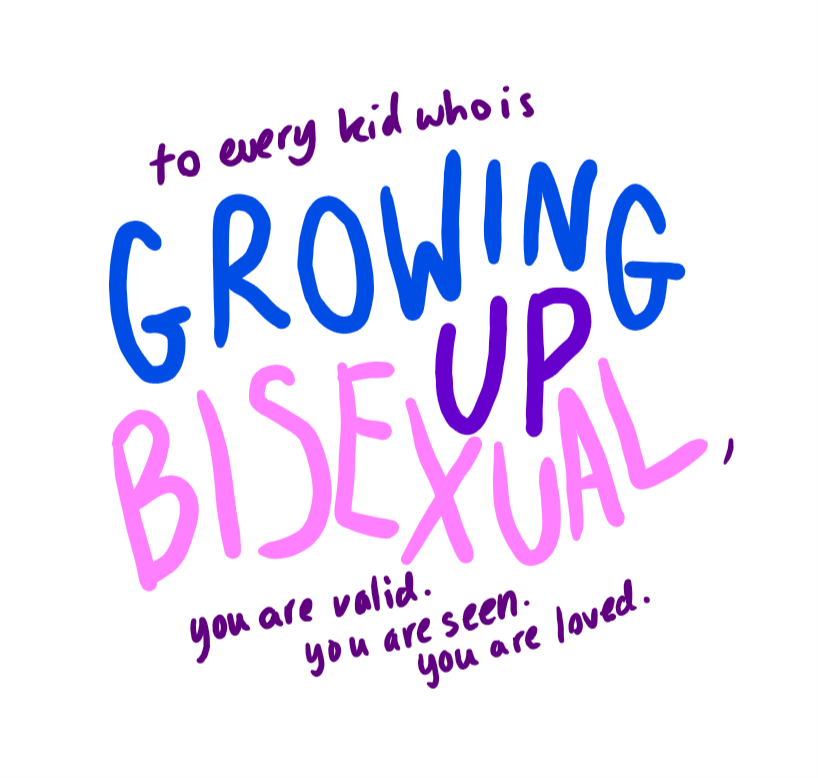 [Image description: Blue, pink and purple digital bubble writing on a white background, reading: “to every kid who is GROWING UP BISEXUAL, you are valid. you are seen. you are loved.”]


Happy Bisexual Visibility Day! On this day, we celebrate ourselves as bisexual people in a world that often overlooks our community in both a heteronormative sense and as a part queer culture. Despite the B in LGBTQ+ standing for bisexual and our long history in the fight for queer liberation, we are often left out of narratives surrounding LGBTQ+ issues and experiences. For example, you’ve probably never seen a coming-of-age story where the character is discovering their bisexual identity in the same way you have movies like Love, Simon or the plethora of other straight films about young romance. This is because bisexuality is often framed as being both gay and straight; however, the issues our community faces are unique to bisexual+ people (those who are multi-gender attracted) and, whilst I definitely saw myself in Love, Simon and cried my eyes out, it did not wholly encapsulate my experience.

Seeing actual bisexual representation in the media now warms my heart, but it is few and far between: actually getting it right is even rarer. Sure, Glee had a bisexual character when I grew up watching it, but her ex-girlfriend then gets with a lesbian and says, “now I don’t have to worry about my girlfriend straying for penis”, so it didn’t really do much for me. Especially as a young, confused teenager.

This is why we need visibility. Now, visibility is not the be-all-end-all of our liberation or acceptance into culture. Visibility can often come at the price of facing more danger and being hypervigilant, and places the onus of acceptance on marginalised people not “putting themselves out there” more. Many bisexual people also aren’t visible for many reasons, one of which being for their own safety, and another being that we are often read as either gay or straight based on our partnering at the time. It erases a massive part of our experience.

However, this is why visibility is particularly important to the bisexual community. Bi-erasure and invisibility is linked to the rates of poor mental health within our community specifically, because it is a unique challenge we face. Then, if we come out, we face exclusion from queer and heterosexual spaces alike, and social exclusion is also correlated with worse mental health. In fact, bisexual people face higher levels of anxiety, depression and suicidality than not just heterosexual people, but lesbian and gay people, too. We also encounter higher rates of sexual assault/harassment, which is particularly problematic considering many of our stereotypes centre on our “greediness” and “promiscuity”. Yet, despite a plethora of research showing us to be the most vulnerable sexual minority community, our issues are neglected, belittled and written off. Most people don’t even know how much we are suffering.

Growing up bisexual was a big confusing mess as a result. I came out seven years ago, aged 14, to the immediate reaction of “it’s a phase” from my family, meaning that I had to navigate this self-discovery on my own, quietly. Throughout the next few years, I encountered a slew of biphobic remarks and experiences:

Bisexual teens are less likely to have access to safe spaces and supportive adults than lesbian or gay people, and that was definitely my experience. If I had just one adult to talk to at school - a counsellor or someone who ran an LGBTQ+ club, anyone - I could have avoided a lot of toxic situations and had more confidence in who I was.

Now that I have a social support network and I’m an out and proud adult, it doesn’t bother me too much. But I know how badly these kind of things can impact you, especially as a young person, and so does the research. If you are a young bisexual person, please know that you are not wrong, not indecisive, not greedy and you do not deserve any level of abuse or belittlement. I support you and there are places and spaces that will support you, too. Here’s a few online places (sorry for the UK focus!):