Reflections on Pride in London 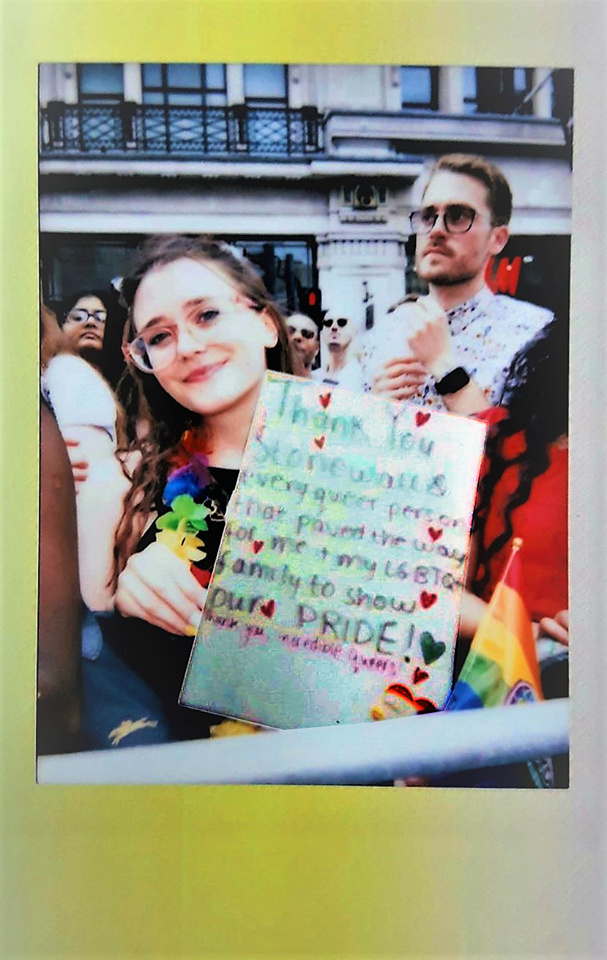 [Image description: This image was taken of Emily by a lovely queer at part of the Pride in London parade and given to her. Her sign reads: ‘Thank you Stonewall and every queer person that paved the way for me and my LGBTQ+ family to show our pride! Thank you, incredible queers.’]
Article by Emily Bourne
“This year I attended London Pride for the first time, and it was the best experience of my life.”
On the way to London Pride, I saw so many happy people dressed colourfully with their friends. The further I went towards London, the number of rainbows and smiles increased.
At the location of the event itself, masses of queer people and allies were psyched for it all to begin. I saw so many cute young people, dressed in trans flags or in drag or clothed in every colour of the rainbow, with their families, both chosen and biological. There were young people who were at Pride not just to have fun and show their pride, but also to voice their views. I saw signs saying “institutional racism is real”, “stop violence against trans people”, along with the names of trans women who have been mistreated and “protect trans kids”, but also less serious ones like “be gay, do crimes”.
The parade began with so much energy: LGBTQ+ people on motorbikes (who I think were the Dykes on Bikes team) drove past and revved as loud as humanly possible, encouraging laughter and cheers from the crowd. Throughout the march, LGBTQIA+ organisations walked down the parade route, with music, interacting with the crowd and dancing around, enjoying themselves. These organisations (like the Women’s Equality Party, GLAM, Mermaids UK, Switchboard and Diva Magazine) had genuine interactions with the crowd - for example, I was sprinkled with glitter by a member of the GLAM team (thank you for the extra gayness) and hugged by others; a person from the Women’s Equality Party took a picture of me and showed gratitude for my sign; another person (I’m not sure which organisation they were from) spoke to me, telling me that my sign made them smile because they were there when the Stonewall riots took place! I spoke to real queer legends, who are intent on making life better for queer people.
In contrast, companies partnered with Pride in London, like Ebay and Tesco, were less likely to appreciate the queer people watching, putting their whole self out there - despite how scary it might be for them. The corporate nature of Pride is what stops a lot of queers from coming - and although I understand that Pride needs the funding that these Partners give, I agree that they are taking the time away from people who really are dedicating their lives to LGBTQI+ activism.
Even though Pride was also political, it isn’t the protest some people want and need it to be. From what I’ve gathered, Pride allows people to be political without being too angry - there were groups at pride who focused on trans rights and chanted ‘trans rights now!’, but it felt like an acceptable level of political for people who don’t like confrontation or care about LGBTQI+ rights. But, if you want to make your arguments less palatable and more of a demand - there are protests for you!
I first heard of the Queer Liberation March through Wednesday Holmes, an agender, queer LGBTQI+ activist and artist. This march took place the same day as the Pride in London parade, but was more about protesting for key issues in the queer community right now and having an LGBTQI+ event with no corporate advertisation or barriers.


📸 : @thegayphotographer @voices4london is launched! Join our chat via our story and let us know if you can make our meeting! 🏳️‍🌈 scared of coming alone? Meet Wednesday at the outside project 6.45pm 18th July!
A post shared by Voices 4 London (@voices4london) on Jul 10, 2019 at 7:41am PDT

[Image description: Six queer legends stood together holding signs.
From left to right: @vittoriofranco_kweer (who is holding a sign reading 'Pride is a protest'), @casenovah, @andreadigiovanni (who is holding a sign reading 'post soviet and queer'), @hellomynameiswednesday (who is holding a sign reading 'end intersex surgery now!'), @mxdarren_ and @radamridwan (who is holding a sign saying 'the gender binary is a racist lie').
This march pictured in the photo above was in solidarity with African Rainbow Family, The Outside Project, Lgsmigrants and others. If you are interested,you can join the team by metting them at The Outside Project in Farringdon on the 18th of July 2019 at 7pm.
If you have any questions, message Wednesday Holmes on their Instagram @hellomynameiswednesday or message the Voices 4 London account itself.
Before concluding, I would like to say to allies and straight people who attended Pride: if you can party with us, you should also be prepared to fight for us. Join these protests, be an activist for our rights every day, don’t just join us when things are pretty.
Overall, Pride in London 2019 was the best day of my life and it gave me so many lovely memories. Thank you to everyone for your kindness. Thank you, Pride in London. Thank you Stonewall. Thank you to every queer that has paved the way for queer people to show their pride. Thank you to everyone that attended the protests, too - you’re making the world a better place. 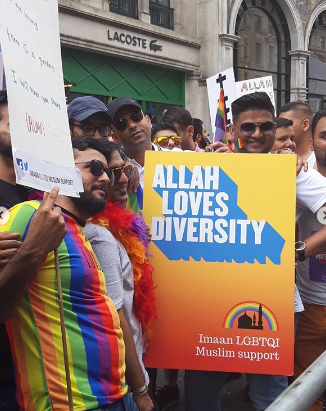 [A group of people from Imaan, a muslim LGBTQI support group, holding a sign saying ”Allah loves diversity” and smiling at Pride in London. Photo taken by Emily, the author.] 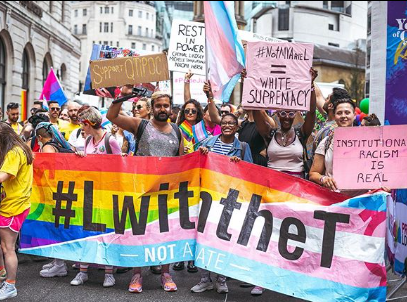 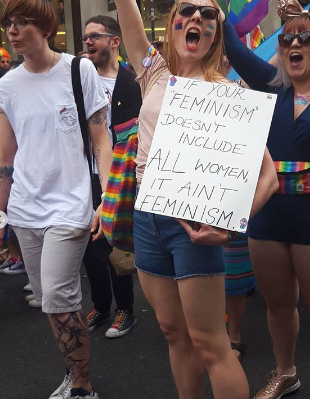 [ a person with their mouth open in a yell and fist in the air is holding a sign saying ’if your feminism doesn’t include all women, it ain’t feminism’. Photo taken by Emily.] 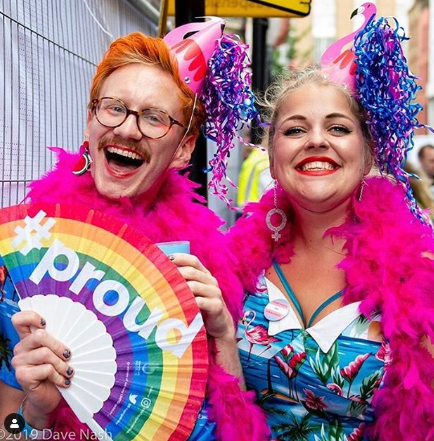 [ Image of two friends next to each other, dressed in party outfits and a rainbow fan, smiling. The hashtag ‘proud’ is written on the fan. In the bottom left hand corner is the copyright mark to Dave Nash.  Source. Image and all rights belong to Dave Nash.] 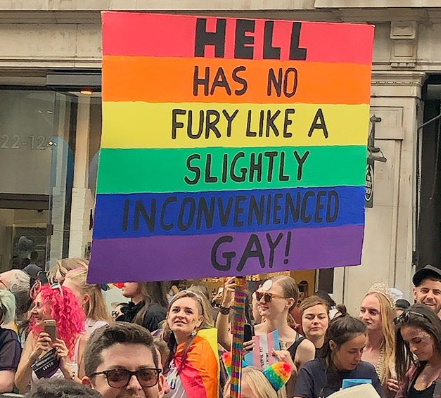 [a rainbow sign with the text ’Hell has no fury like a slightly inconvenienced gay!’ is held up, and a crowd is seen around it. Image by @fitness_buddy_uk on Instagram. Source.]
*
Contact us!
Risen Magazine’s Information: Instagram / Tumblr / Twitter / Youtube / Buy Our Magazine! / Email: risenzine@gmail.com
The author’s information: Instagram / Shop / Email: emy.bourne@gmail.com
#nojusticenopride corporate pride Emily bourne floteren hellomynameiswednesday lgsmigrants london pride in london pride is a protest pride month protest the outside project 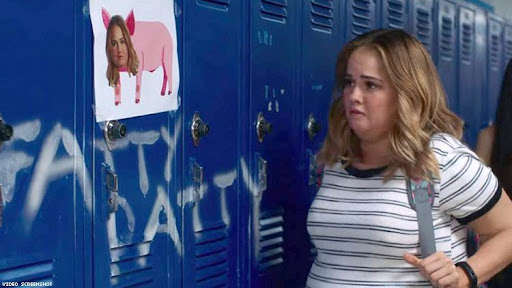