Insecurity of a ‘straight’ relationship 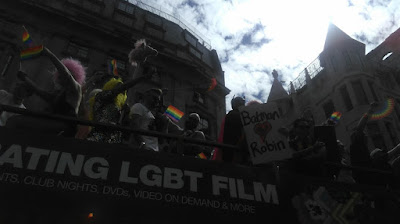 [Image description: open top bus with a large group of people dressed as film and TV characters and drag queens. One person is holding a sign saying 'Batman loves Robin']

Article and photo by Sophie

LGBTQ+ = an acronym for a community which stands for Lesbian, Gay, Bisexual, Transgender and Queer. The plus represents the inclusion of all the other identities. Sometimes seen as LGBT/ LGBTQ/ LGBTQIAA


sexuality = the sexual/ romantic/ emotional/ spiritual attraction you have