on May 03, 2019
Four Things to Remember on Yom HaShoah
Article by Ellanora Lerner 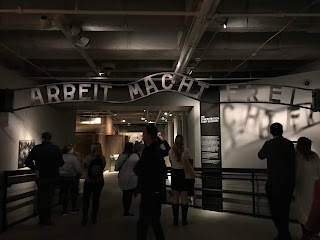 [Image Description: A photo taken in the United States Holocaust Memorial Museum in D.C. of a copy of the arch over the entrance to Auschwitz which says Arbeit Macht Frei (work sets you free in German)]

Yesterday was Yom HaShoah, the day on which many in the Jewish community remember the Holocaust. The Holocaust was the systematic mass murder committed by Nazi Germany in World War II of around 6 million Jewish people and countless others, including Romani people, people with disabilities, gay men, and political opponents. To Jewish and Romani people: remembering the Holocaust and reflecting on what it means in your life is hard, come to it however you need to. To everyone: here are four things to remember this Holocaust Remembrance Day.
I.
The Holocaust was not the beginning or end of antisemitism. Jewish people have been blamed, ostracized, exiled, and killed throughout the world for thousands of years and antisemitism still exists on many levels today. And antisemitism in general is not the total of the Jewish experience. As with the stories of other oppressed groups, we all have the responsibility to acknowledge that we are not taught everything and to do the work to dive deeper into history.
II.
Genocide does not come out of nowhere. It is preceded by discrimination and hatred, and emerges in societies where indifference to prejudice is allowed to fester. This relationship must be understood in order to prevent genocide and everyone must check themselves and the people around them for the actions which build the foundations for violence. 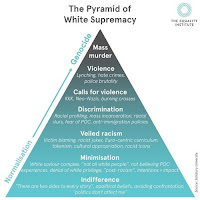 Courtesy of Subbed In
[Image Description: A triangle shaped graphic to show the many levels of white supremacy from normalization to genocide]

III.
It is not just that the Holocaust must be remembered that makes this day important; it is that it is often not remembered. Numerous studies have demonstrated significant gaps in the public knowledge of the Holocaust. It is the responsibility of everyone to not only educate ourselves but to push for more awareness in our communities, through social media, and in the public education. And this applies not only to the Holocaust but to the countless atrocities that have been perpetrated throughout history.
IV.
The Holocaust did not only take the lives of the millions that were killed: it left survivors and their children with lasting trauma and it virtually destroyed the Jewish populations of Eastern Europe. To truly mourn the damage done by the Holocaust we must remember not only those who died but the broader culture destruction. My ancestors were from Eastern Europe; Yiddish, the language and culture, is my birthright and it was decimated by the Holocaust. The lives and lands of my ancestors have been burned to the ground and I can’t go back. And that is a trauma that will continue affecting the Jewish people.