Endometriosis, not just a period. 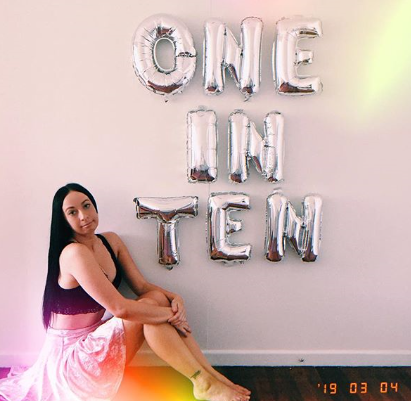 Source: thatendogoddess on Instagram.
[image description: girl sat on the floor next to balloons saying “one in ten”]
Article by Emily Bourne.
1 in 10 people with vaginas suffer from endometriosis. This is where you go: “Huh? What are you talking about? What is endometriosis?” Well, endometriosis is as almost as common as diabetes, yet most people have never heard of it.
Endo isn’t just an issue for people with vaginas, though. Although it’s rare, it can also develop in people with penises too. For more on this, read here.


Endo is ‘a condition where tissue similar to the lining of the womb starts to grow in other places, such as the ovaries and fallopian tubes. It can affect (people) of any age, but it's most common in your  30s and 40s.’
Symptoms of endometriosis include:
Furthermore, due to lack of awareness around endo, many sufferers can go undiagnosed for years, being told it’s ‘just a bad period’. People with it are made to feel like they’re overreacting, as if they’re experiencing normal period pain (which hurts a whole damn lot anyway) and not a serious chronic illness. 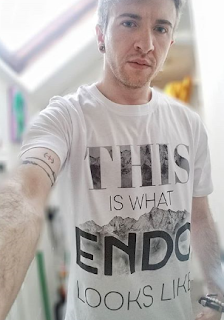 [Source: picture by Cori Louis Eli Smith
Image description: a picture of Cori wearing a shirt saying “this is what endo looks like”]
Whereas periods are a natural process that most people with vaginas experience, endometriosis is a debilitating chronic disease can’t really be treated with painkillers and a hot water bottle, but instead with a visit to the hospital. Additionally, periods don’t cause infertility, long term bowel and bladder complications, endless amounts of surgeries, early menopause, lesions throughout your entire body, or increase your risk of various cancers. 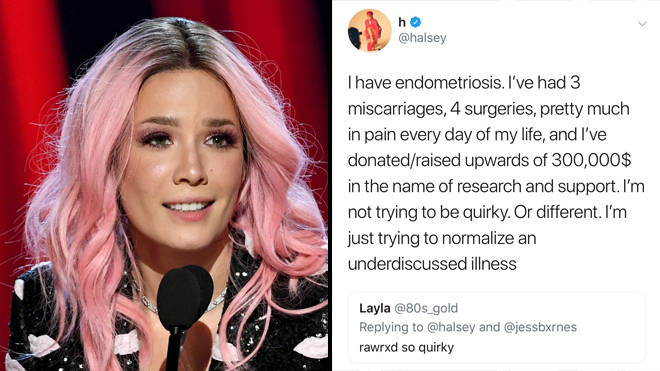 [Source: Singer Halsey on Endo
Image description: Picture of Halsey on the left, paired with a tweet on the right saying “I have Endometriosos. I’ve had 3 miscarriages, 4 surgeries, pretty much in pain every day of my life, and I’ve donated/raised upwards of 3000,000$ in the name of research and support. I’m not trying to be quirky. Or different. I’m trying to normalise an under-discussed illness”]
People with endo may have extreme difficulty getting pregnant, so stop telling them ‘it’s about time you have some kids’. Here’s an eloquent Instagram caption by thatendogoddess on this topic:
“We grow up thinking that getting married & having babies is what makes us a successful woman... we’re constantly being asked, do you have kids, when are you having kids, how many kids do you want, you’re getting old you should probably have kids blah freaking blah blah. (...) As kids we play Mum to our dolls... as we get a bit older we make Barbie & Ken have babies in the backseat of the pink convertible... & then all of a sudden we’ve got endometriosis & feel like a failure cause our reproductive organs barely work & babies feel impossible. There’s so much focus on “HAVE BABIES” in the world... & I hate that women feel so much hate for themselves if they can’t... as though it’s the only thing we’re put on this earth to do.
The unpredictability of endo is the worst. It’s like you know there’s a giant bomb on the brink of explosion, you just don’t know what it’s going to destroy next.
And though we are strong, resilient, beautiful women who still have so many amazing things to be thankful for & look forward to in our lives, sometimes it seems like all there is is endo.
So ugh, today I’m just gonna say it... f*ck endo! Oh & P.S. though we don’t always feel it, we are not failures, we are bright shiny warriors.”

[Source: Image by @thatendogoddess
3 images of a thatendogoddess showing physical signs of the pain she’s experiencing]
*Through out I refer to ‘someone/a person’ with endo because people with vaginas, whatever gender they identify as, can get endo & people with penises (though rarely)can get endo, too.
Resources:
Endometriosis UK - Endometriosis devastates the lives of women and their families. Endometriosis UK helps them take back control by providing vital support services, reliable information and a community for those affected by endometriosis.
Extra information:
Risen: Instagram / Tumblr / Twitter / Youtube / Buy Our Magazine!
The author -
Emily: Instagram / Shop
Featuring:
Thatendogoddess: Instagram
Cori Smith: Instagram
Halsey: Youtube, Instagram, Twitter, MTV Interview on Endo