Booksmart: We’ve Been Waiting For You 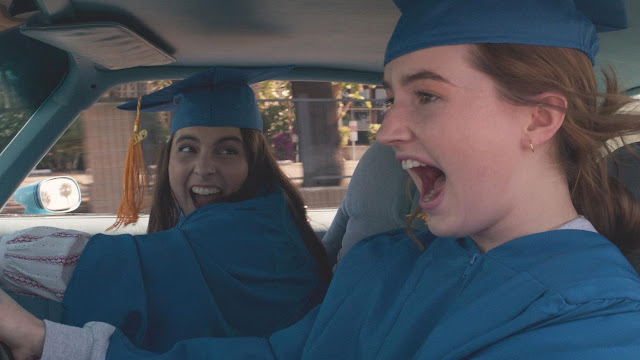 
image source/ image description: Beanie Feldstein and Kaitlyn Dever in Booksmart (2019)
Booksmart (2019) is the female-led high-school movie we have long dreamed of. It follows best friends Molly (Beanie Feldstein) and Amy (Kaitlyn Dever) on their final day before graduation and their quest to attend their first - and last - high school party. The film is both hilarious and heartwarming as it explores the nuances of female friendships and the complexities of these two ultimate overachievers.


Like any high school film, Booksmart establishes its social hierarchy and it is clear that Molly and Amy are not ‘cool kids’. One of the few rules they have broken is acquiring fake IDs, not to get alcohol, but to access 24-hour college libraries. To put it bluntly, they are massive nerds: they have sacrificed partying with their peers to get into the best colleges. But on the final day, they realize they did not have to make these sacrifices, and so they go on an adventure to take advantage of their final opportunity to go to a high school party as high schoolers.

What makes Booksmart so special is how seriously it treats its heroines, even with all their neuroses. At the core of the film is the friendship between Molly and Amy: when we first meet them, they greet each other with an embarrassing and long dance, which we can only imagine they have done hundreds of times before. They balance each other perfectly. Molly is bossy and bold, she dresses like Cher from Clueless (1995) and is described as being half Slytherin, half Ravenclaw; Amy, on the other hand, is just as determined, but has a far quieter personality. When trying to work out if the girl she likes is also queer, she awkwardly asks if she would have a hard time in Uganda. But even in their differences, we always understand why Molly and Amy love each other.

We deserve more films like Booksmart. It is a raunchy coming of age movie which manages to be progressive without sacrificing its silliness. It is also the directorial debut of actress Olivia Wilde. For too long, male characters have been allowed to be debauched while their female counterparts are rarely given any dimension. Here, having a woman behind the camera is truly felt.  Throughout the promotion of Booksmart, it has been called the female Superbad (2007); incidentally, star of Superbad, Jonah Hill is the real-life brother of Beanie Feldstein. But more importantly, Booksmart exists in its own league. While watching it, I couldn’t help thinking that I wished it had been around when I was 12.  But it is here now, and I am equally excited for all the young girls who will get to watch it.