Climate change is nothing to scoff at. It's happening and if we don't stop it soon, who knows where the world could end up. Below are some graphs that illustrate how severe climate change currently is and how much worse it could get.

Starting out with a simple one, you can see how Arctic sea ice isn't reaching out as far as it used to. Note here that this is not referring to the Antarctic Ice Sheet: the Arctic and Antarctic are very different. For example, the Arctic basin is confined to the ocean and protected by land all around while Antarctica is on land. This makes it melt and freeze more throughout the year. Antarctica is also affected by more factors like warm ocean water.

With, sea ice decreasing rapidly, this means two things. First of all, it means that the Earth's albedo, or reflectivity, is decreasing; this leads to more solar radiation being absorbed by the Earth instead of re-radiating back into space. As sea ice melts, the Earth's albedo gets lower which just leads to more melting and decreasing albedo. This cycle is known as a positive feedback loop because the event triggers itself over and over until it spirals out of control as the effects are being compounded.


Secondly, decreasing sea ice means a higher sea level: this is when it gets worrisome for humans, as many people live in coastal cities. (Many major economic centers are also coastal.) If sea levels get high enough, those cities could be demolished. It's all a matter of time with the ice melting as fast as it is.
This chart shows how much higher or lower the temperature was that year versus the average (on this chart, 0). The shorter bars indicate mild deciations from the norm, while longer bars signify ectreme deviations. As you can see, ever since 2000, really starting the 1990s, there have been consistently hot, extreme years, which is extremely alarming to see especially compared to the last century when it was a lot more balanced and natural. The last year in which it was colder on average was the end of the 20th century, and it was only mild - you have to go back a century to see any significantly cold years. 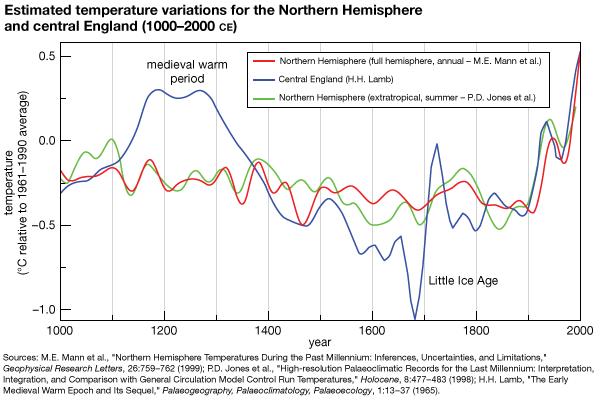 Image Description: A graph showing the temperature changes throughout the past thousand years. Source: Britannica

Climate Change is normally detrimental to human survival. As the diagram notes, the little ice age was only about a degree celsius colder than average, but it made a huge impact. In this time when glaciers advanced, frigid winters and cool summers led to crops dying and famines. As ocean temperatures plummeted, so did the fish population. Colonies collapsed from starvation. Remember, this resulted from a degree change in average temperature.

We have surpassed that benchmark. (Note that the last two decades are not shown in the chart.) Our temperatures have increased more than a degree. The only reason why we have not truly felt the effects is because of, among others, our technology. Also, the effects are never truly felt except in hindsight.

Some of the scariest charts show the different routes our future could take. The worst part is that it always seems that no matter what, it will still be bad: just less bad. This graph shows the concentration of greenhouse gases in parts per million. Currently we are at 385-400 ppm for CO2 alone. Some scientists think that once we reach 450, there's no going back. The Lowest Emissions Pathway is the only way to make sure our Earth is kept for the future. (RCP stands for representative concentration pathway for reference and take into account things like climate policies and more.) But when Trump pulls out of the paris climate agreement and completely reverses all the good Obama has done, it seems hard to believe it's possible. Where we're going now, we may end up with the Highest Emissions Pathway, more than triple our current emissions.

What you can do to help:

There are many articles out there on what you can do to help, ranging from going vegan to using your bike to limiting one time use items. Everything helps. Swapping plastic cutlery for metal or plastic bottles for reusable ones.

To get more involved, consider supporting charities and other groups aiming to fight climate change. For example, Zero Hour is a youth movement fighting for a future free from famine and the like.

Just remember, real change happens at the level of policy makers. If we can get them to listen to our cries, maybe we can work together to fix this issue we've created.