The Polar Vortex and Why Climate Change is Fake (JK) 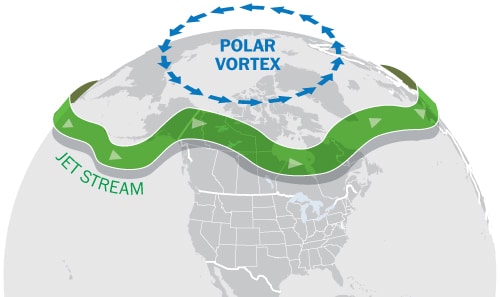 Recently, with the polar vortex across the United States, we've been hearing a lot about climate change and meteorology. In the news, there are words like "wind chill" and "climate change" (or as some people incorrectly put it, "global warming") being tossed around. But what do they really mean?
Image Description: An image showing the polar vortex from the Washington Post. Note the curvy appearance of the jet stream. While it doesn't appear to go to the US, warm air can push the jet stream to higher latitudes, but then the jet stream may get pushed to warmer latitudes farther along.

What was the polar vortex all about?

The polar vortex is a counter-clockwise-spinning low pressure region about 30 kilometres above the poles (Note: it's different in the Southern Hemisphere - the pressure gradient force makes areas of high pressure go to areas of low pressure; in the Northern Hemisphere, the Coriolis effect, due to the Earth's west-east rotation, makes wind go right so air spirals into low pressure areas counterclockwise - the Coriolis effect deflects winds to the left in the Southern Hemisphere so it is a clockwise spinning region.) Not too long ago, the North Pole's polar vortex increased in temperature by 70 degrees (Celsius) due to the hot air flowing from the south. As this warmer air travels, it cut the vortex into little pieces, and one such air mass moved to the US. In years past there have been abnormal low temperatures because of this phenomenon. Contrary to popular belief, polar vortexes are not new. It's actually normal for the polar vortex to be less stable and expand in the winter time, which is what sent the cold arctic air to the US via the jet stream.

How did temperatures "feel like" -50 degrees when they weren't?

There are a lot of different temperatures of the polar vortex floating around. The idea of "feeling like" a temperature is not based off someone approximating, i.e. "well, it's a lot colder than it was last Tuesday when it was -20, but it's warmer than it was yesterday at -60, so let's say... -50?" Rather, it's based on the scale called the wind chill index. The index, created by the National Weather Service, factors in the effect of wind. To get an approximation of what it feels like, it takes recent heat transfer theories and a bunch of interesting concepts. However, for more general guidelines, it calculates based on no sunlight and averages the effect for skin tissue. (Although with the recent temperatures, the difference between -50 and -40 may have just been the time to freeze skin, as experts said it would only take 15 minutes to do so at such extreme temperatures.) While there's a long equation on how to figure out the wind chill index, a good rule of thumb is that the windier it is, the lower the temperature feels like and the farther it is from the actual temperature.


If it's so cold, how can there be global warming?

Technically, global warming isn't the right term. While on average, the Earth is warming, that's not all that's going on. A more correct term is climate change as it is about how our climate is changing more than just heating up. While climate change may lead to more extreme heats, it also leads to frostbite-colds. A good way to think about climate change is it being about more extreme weather.

This is slightly on a tangent here, but there are many arguments for climate change not being real. Some "good" reasons are listed below. (For comical purposes only… most scientists agree that climate change is real.)


1.The sun is getting hotter

The sun is burning brighter than it has in the last millenium according to a study on increasing radiation. It started radiating more in the past century and this extra shortwave radiation can be blamed for at least part of warming. (Although how much is questionable.) It has been demonstrated that fewer sunspots are linked to cold periods. Hence, since there have been more sunspots over the last hundred years, we can conclude that the Earth is getting warmer because of that. Additionally, Beryllium 10, formed by cosmic rays that are less powerful when the sun's magnetic energy increases, has been found in the lowest levels for the past thousand years. See, all evidence points to the stronger sun being the culprit!

Disclaimer: The sun may be getting warmer, but climate change is so severe that there's no way all of it can be blamed on the sun.

2. Before the Clean Air Act, aerosols cooled the climate
Aerosols fall into two categories, light-colored and dark-colored. Light-colored aerosols reflect solar radiation which helps with cooling. The Clean Air Act set out to reduce the amount of particulate matter in the atmosphere, including aerosols. After the act, the amount of aerosols significantly reduced, thus it can be concluded that climate change is because of left-wing politicians who are actually doing more harm than good!

Disclaimer: A lot of dark-colored aerosols, particularly soot are caused by fossil fuel burning. These are the aerosols that are bad for the environment. In fact, they absorb heat like greenhouse gases do, such as carbon dioxide and methane. In addition, this argument is an extreme stretch based on questionable logic and reasoning.

3. Haven't you noticed? It's getting colder!
Proven by the recent polar vortex and the US's very own donald trump, it's getting colder! If it's cold outside, that means there's no way that the overall trend could be going warmer!