The Misremembering of Malcolm X 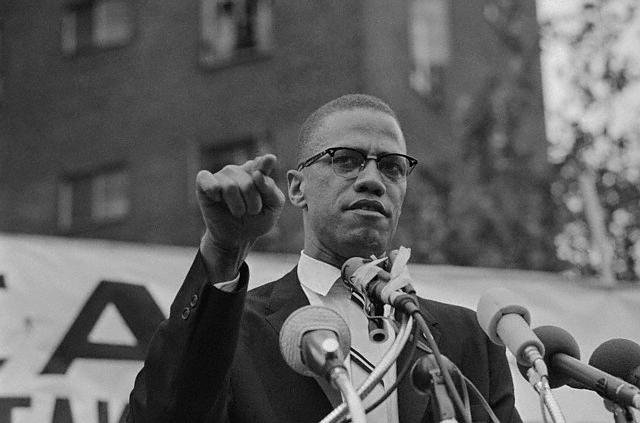 It’s Black History Month. The month where Americans take the time to celebrate important black individuals of the past and the vast history of the African diaspora. But as with all history, simple narratives are created to present complex people and ideas: nowhere is this more apparent than in the memorialization of Malcolm X.
Malcolm X, born Malcolm Little, is known for being one of the most influential African Americans in history. A convict turned Nation of Islam minister, Malcolm preached black empowerment. Malcolm rejected the non-violence preached by Martin Luther King Jr. and the civil rights movement. He is known for the stance that blacks should defend themselves ‘by any means necessary’. Unsurprising, Malcolm’s philosophy has been misunderstood over the years. Whilst he did advocate for black empowerment, his legacy has been tainted by this idea that he only preached violence and was in complete opposition to Dr. King. To look at the two approaches so simplistically is an affront to the legacy of both men and the work of the countless others working at the time.


Malcolm’s memory has been kept alive through his seminal book The Autobiography of Malcolm X. Published in 1965, his autobiography has since sold millions of copies. Beginning with his childhood, Malcolm and his co-writer Alex Haley chronicle his life of transformations, writing about his criminality, imprisonment, his life as a minister for the Nation and Islam and his conversion to Sunni Islam. Throughout his life, Malcolm has a series of religious and political transformations, but readership of The Autobiography has peddled the narrative of a mythic Malcolm to a great extent. Since its publication, Malcolm’s life has been presented as the ultimate transcendent narrative, but I believe that iconizing our historical leaders like this does them a disservice. Imaging them as greater than means we cannot imagine them as complex characters. Real people who had contradictory ideas. By the end of his life, Malcolm was unclear about the type of leader he wanted to be, but that doesn’t take away from the impact he had while he was alive.
American historian Russell J. Rickford coined the term ‘Malcolmology’. It described how African Americans rediscovered Malcolm X as a cultural icon in the 1980s and 1990s. Malcolm was particularly embraced by many hip-hop artists - for example, Public Enemy’s album It Takes a Nation of Millions to Hold Us Back(1988) featured numerous samples of his voice. The rise of Gangsta Rap led to Malcolm suddenly having wide commercial appeal. The 1990s were fill of X posters, and X-caps. Notably, the newly elected President Bill Clinton was occasionally photographed when jogging outside the White House with an X-Cap contributing to the strange idea that he was the first black president. But Malcolm’s ascendancy in hip-hop culture was problematic: many of the artists sampling him used his voice to propagate their misogynistic and homophobic music. In looking at Malcolm’s omnipresent image, I cannot help but think of his disappointment at all of it. It is almost incomprehensible that Bill Clinton, a man whose crime policies greatly amplified the mass incarceration of black men, would be supported by Malcolm X.
Black History Month is a time of remembrance. It is a time to reflect on how far we’ve come and acknowledge how far we still have to go. The misremembering of Malcolm X is not a one off - our culture of memorialization leaves little room for nuance. Moving forward, we have a duty to do better. To remember better.
amal black history month History Malcolm X