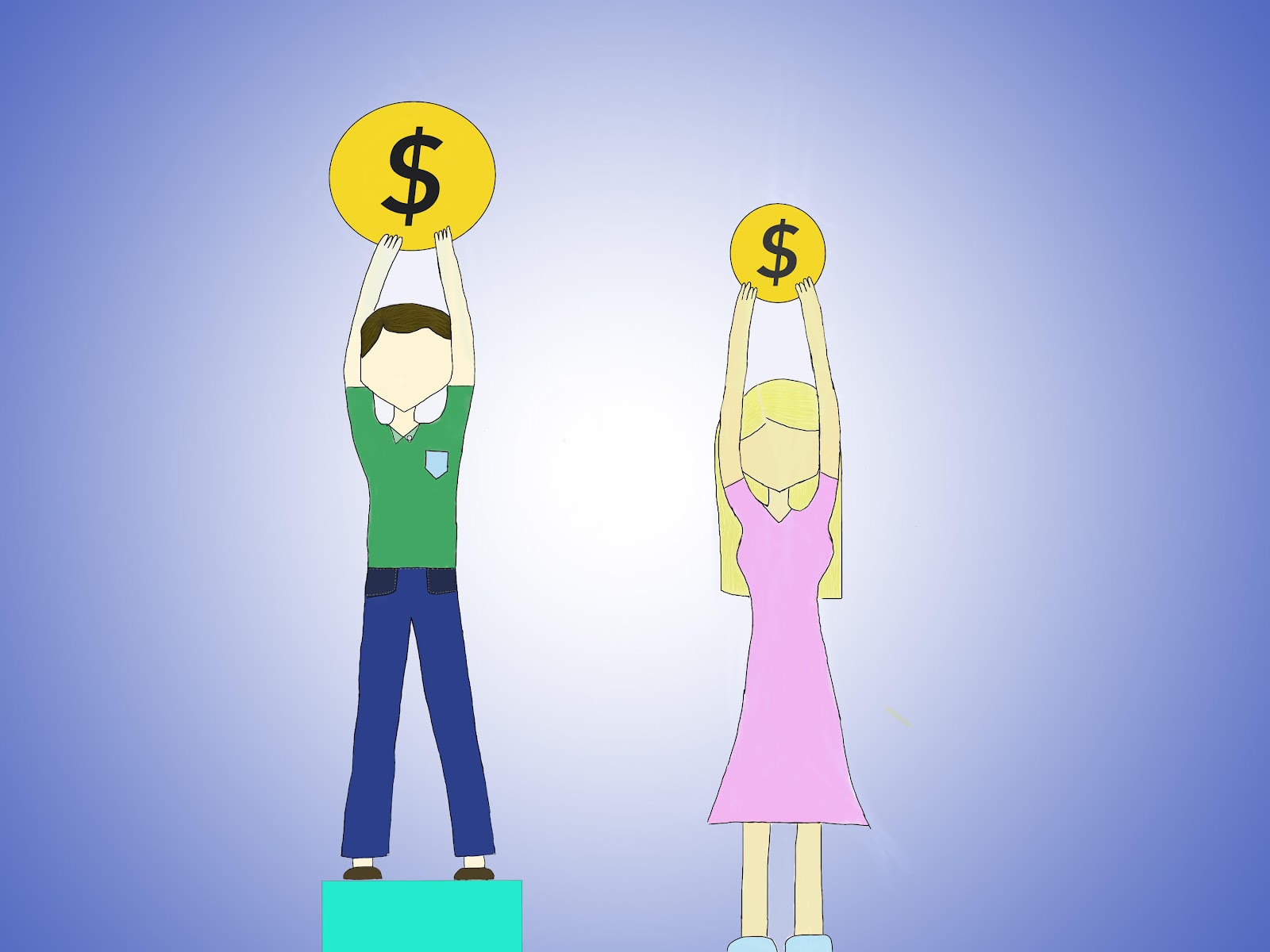 [Image Description: A man and a woman holding up money with the women having less money and the man on a platform.]

Education has always been more than just a place for kids to learn. Schools have always served, at least in part, the purpose of babysitting, especially after child labor laws were put in place, to keep kids off the streets and away from crime while their parents earn an income. In modern day, the effects of schools are further shown in gender pay gaps and impacts on women's rights.

In a world where (typically) women earn $0.78 for every dollar men earn, the gender pay gap is real. But there's a different statistic which seems a lot more optimistic: women earn $0.98 for every dollar men earn. The discrepancy lies in the fact that the second number compares women to men in the same position, while the former just compares wages overall. This would suggest that women as a whole adopt lower paying and/or part-time positions compared to men - a further confounding factor in gender pay equality. How does this relate to education? The gender pay gap is largely explained by motherhood and the education system in America continues to fuel these outdated stereotypes. Imagine you're a thirty-year-old woman who just got married. You might now be looking to have kids. There are a few scenarios here as outlined below:

One is that you have to help support your family so you still go to work, but you may have to leave off work early to pick up your child at 3 o'clock. This prevents your career from progressing because you aren't in the office all the time and have to make up your work at odd hours while also caring for your children. This is all because gender stereotypes dictate that women are the primary caretaker and that is what they must do. You don't get as much work done as you could have because you're tired and can’t commit as much time as your male peers, who have their wives staying at home supporting their children and household chores.

Another scenario is that you can't take off work early and instead your child must either be home alone, be with a caretaker or go to an after-school babysitting program. The latter options incur additional cost for your family; and in any of these options, the children are prevented from doing the same extra-curricular activities that they would be able to do if you were free. Now it feels like you are robbing your child of opportunity because of your own selfishness to progress in your career. The guilt slows eats away at you, and you might even face pressure from your family, community, and friendship circles to change.

The last scenario, a very common one, is that you become a stay-at-home mother and no longer work. While this does allow you to take your children to extracurriculars and invest your time into them, it completely halts your career and wastes all the time and effort you took to get your degrees and promotions.

All of these scenarios end up with women somehow being unfulfilled, not because of their own fault, but because the school system continues to perpetuate these societal gender roles. School doesn't have to end around three o’ clock. The education system assumes that others will be around whenever children need them which forces women into those assumed roles. In many other countries, school hours are much more in line with working hours and the pressure put on dual-working-parent families is much less severe like in China. Adjusting school hours not only allows students to have a schedule more in sync with the rest of their family, but creates less conflict and stress. It creates an environment for a more balanced school/family time. It lets students spend more focused time at school, learn more subjects and explore their interest areas. It is a benefit to their education as well as to society overall. Also, if school ended later, it might also start later allowing kids more time to sleep than the current system.

Consider those same scenarios if school hours were more in-line with working hours:

The first scenario that you must leave work early becomes obsolete. Instead of having to choose between your children and career, you are able to work regular hours and then pick up your children. Your career continues to progress as your male colleagues.

The next scenario with you working regular hours but having to arrange after-school care also no longer exists. There is no more financial burden for after-school care, nor is there guilt while you compare yourself to other stay-at-home mothers. Everyone is at equal playing field, and you are no longer penalized for being a working mother.

Lastly, being a stay-at-home mother becomes a personal choice rather than something thrusted upon you by societal stereotypes.

[Image Description: A mother puts her hand on her son in a caring way.] 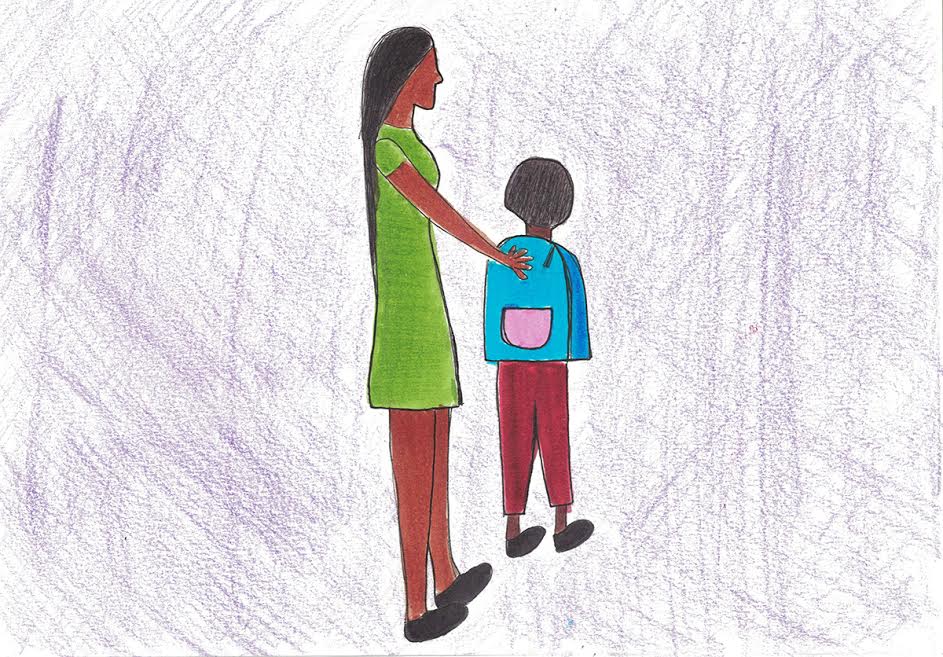 Longer school hours also help single mothers who need to be both providers and care takers by themselves. But almost three times as many African American kids live in single parent households than non-hispanic Caucasians. Extending the time in which kids are in school would especially help minority women as they are disproportionately affected by the wage gap - earning something more like $0.64 than the $0.77 white woman earn. Besides this wage gap which is even wider for Hispanic woman at a meagre $0.56, minority women are also subject to many other hurdles that white women do not have to experience, which means that helping them is very important.

Lengthening school hours is about giving women choice. They shouldn't have to give up something they love while men don't have to. We can allow women the freedom with their careers based on what they want to do. By ending school at three o’clock we are making women choose between their careers and their children. By ending school at three o’clock we are putting an unnecessary burden from society onto women to fall into traditional gender roles. By ending school at three o’clock we are hurting women and their rights. The Equal Pay Act of 1963 fought to change the disparities in wages between sexes yet in 2018, they aren't gone yet. Of course, there is broader cultural stereotype and perception shift that needs to take place; but until that happens, we can at least minimize systematic factors that exacerbate the problem, such as school hours.