Hair in the Media 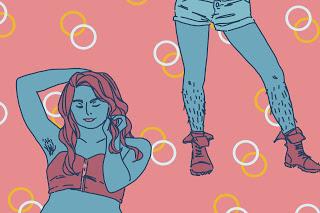 Article by Sophie and cover art by Kayla Rader

Long, flowing, luscious strands on the scalp and smooth, hairless, skin like a beluga whale bodies.


That’s how women should look, isn’t it?
The well known hair removal company Veet released an advert earlier this year targeted for men. Within the 20 second promotion it shows four different topless man dancing around with confidence and having no chest hair. A fifth male displays the effectiveness of the product with a side by side comparison before and after using the hair removal cream. Now to some people, this advert may have just slipped under their radar however, when I saw it last month in the cinema I was sat there open mouthed at the sexism. The ad itself was fine as it had a ‘realistic’ show of results from using the product but, personally, I was offended because it allowed a man to show their natural body hair when,- if you search up any other advert marketed for women, they seemingly shave their already hairless body parts.

[Image description: left is of my own armpit hair. Right is my own leg hair]

This advert conveys a few things to me; number one is that society accepts men to be confident both with or without hair, as most of the guys had a beard. This is typically viewed as a masculine symbol and therefore would be strange to choose to remove it, whereas body hair in other places is less desirable. Number two, I am aware that men may choose to shave as well but have you ever seen a male waxing advert? Yeah, thought so.

We see women on TV all the time who are trying all of these products to get rid of what naturally covers our bodies - from epilating, to wax strips, to lasering, to shaving and yes, cream. But this advert looked so easy and painless for the guys when in reality it can be quite traumatic. This may be me reading into it too much, but it just came across as quite unfair to me, especially the fact that the men were all dark haired which suggests that their hair removal process would be more difficult. But no no, as easy as wiping an already clean surface my friend. And finally, number three:, WHY DO COMPANIES STILL TRY AND TARGET THINGS LIKE THIS BASED ON GENDER WHEN AT THE END OF THE DAY, HAIR IS HAIR AND WE ARE ALL THE SAME!!!
Apologies for the sudden outburst: this is just a continuous debate that I question on a regular basis and wonder if other people are so invested in it as I am. I’m also rather puzzled as to why there needs to be ‘razors for MEN’ and ‘shampoo for MEN’ (et cetera) when, to be perfectly honest, they do all the same job at the end of the day.

The taboo of body hair is in dire need of being eradicated, not only in hair removal adverts but in advertisement in general. There is a very small proportion of fashion lines in print and moving image that show a female with armpit hair or dark facial hair.
One example that comes to mind is Gigi Hadid’s feature in Love Magazine about three months ago. It shows her in some sportswear with a shadow of hair under her arms and the internet was in uproar over this representation, which was fantastic. I would argue that there was a majority of positive response because of her status in the fashion world and her whiteness. I don’t want to seem as if I’m discrediting her, and evidently it is great to see her in the media being unapologetic about something so natural, but I’m pretty sure that if a person of colour who perhaps has dark hair on their arms or legs would be hated more for it. 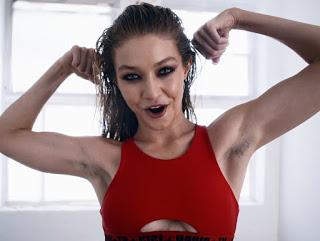 Source
[Image description: Gigi Hadid posing with her arms flexed next to her head showing her armpit hair. She has her hair slicked back, with bold makeup and a red training bra]
But despite this slightly negative post, I did come across an incredible, contrasting advertisement, from the company Billie, which shows diverse women selling a razor and they have hair on their bodies! It’s honestly such a great ad, not only because it shows a range of body types but because it shows them shaving their own hair and including the caption ‘if ever’ - which allows those watching to know it is ok to decide not to shave. It presents the action of hair removal as an option rather than a necessity and there are companies such as Veet who need to pick up on this moral standpoint and positively influence their audiences.
Based on Billie’s advert alone, I would hope that more conglomerate companies such as Veet would be more inclusive with a more realistic representation of female body hair. It clearly isn’t too much of a struggle if they can do it for men.
Sophia Hadjipanteli is striving to normalise female body hair. She has recently become quite popular by speaking up about her overcoming the feeling that she had to shave, pluck and wax her eyebrows and has just let them grow freely. She is now the proud owner of a very impressive monobrow which just makes her facial features so much stronger, and clearly indicates that beauty is not equivalent to the patriarchal expectation to strip ourselves of our natural warming layer. 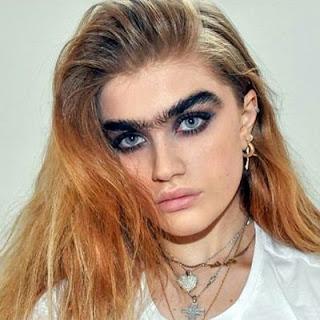 Source
[Image description: head shot of Sophia Hadjipanteli wearing gold jewellery and modelling her boldest feature]
To put into perspective how hated women for their body hair, I want to mention a story from October of last year. A Swedish model called Arvida Bystrom received death and rape threats from strangers on the internet for ‘daring’ to show her leg hair in a trainer advert. To think that such violence could come from something that evolution has given us is disgusting and shocking to many people. It’s moments like that which make me ashamed of society for being so conceited that they would put so much attention and hatred into something as simplistic as body hair. Again, it shows the patriarchal struggle that women, femmes and people read as “female” have to fight against continuously. 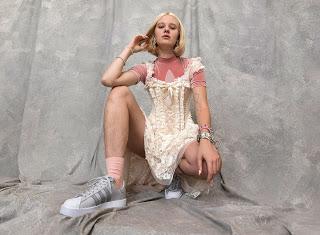 Source
[Image description: studio shot of the model and teenager Arvida Bystrom who is wearing trainers and a dress showing the hair on her legs]
Personally, I have had to deal with a fair bit of body acceptance regarding hair, which I will be sure to discuss more another time on a different platform, but I felt as if this is an important topic to discuss and that it provides a multitude of ideas for debate.
Feel free to leave any comments below of your thoughts concerning this topic!
body positivity feminism hair individual media natural natural hair sophie