Happy 10th Birthday! Cryptocurrencies - What they are and where they're going 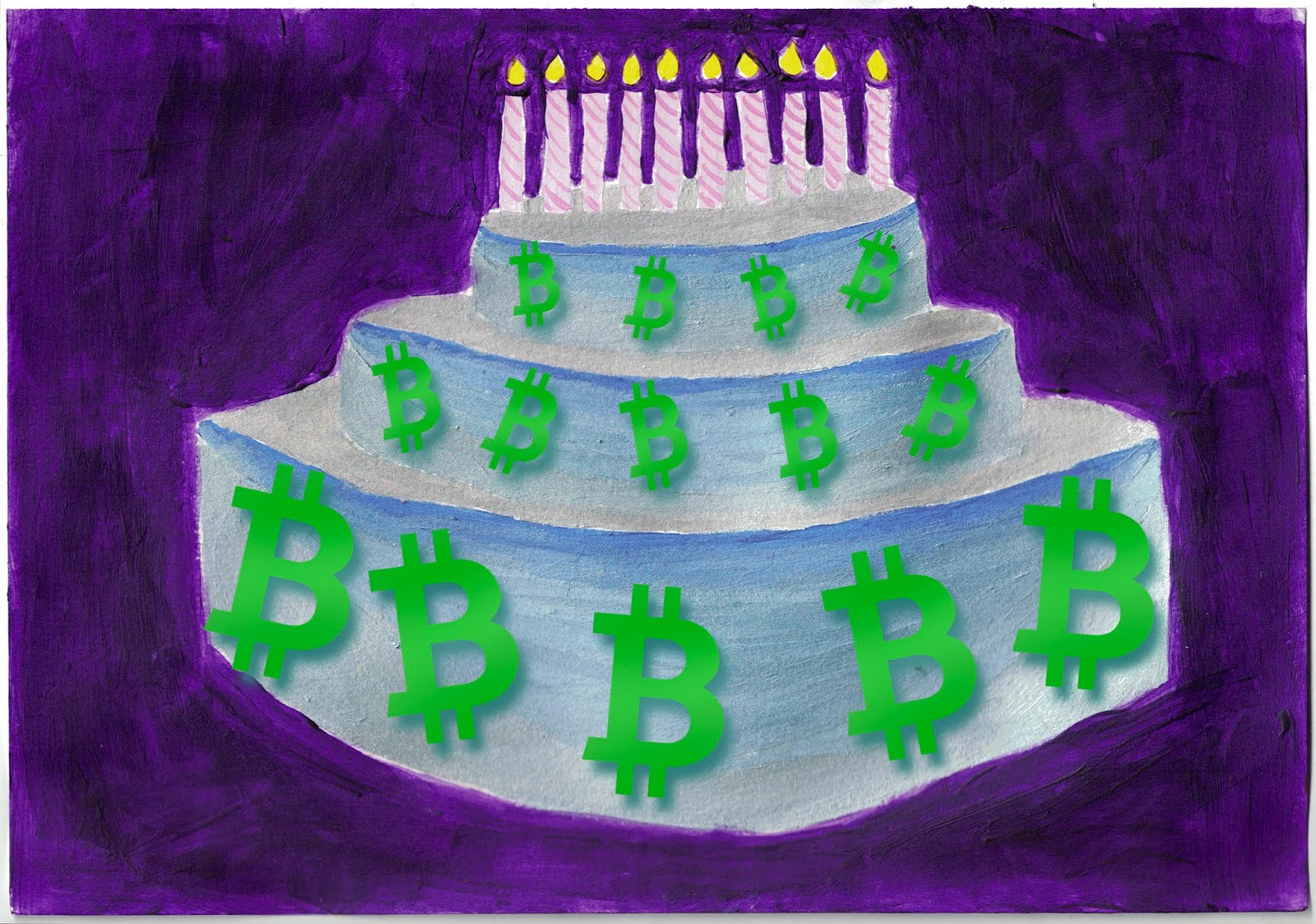 The first Bitcoin was created 10 years ago, but have really become well known recently. The words "cryptocurrency" and "BitCoin" were some of last year's big buzzwords. If you don't yet know what they are, this is a brief description:
Note: The words cryptocurrency and Bitcoin were used interchangeably as Bitcoin is the major cryptocurrency.
Cryptocurrencies are known as virtual or digital currencies since they are only available online. They use cryptography to make sure that everything is secure, which makes it difficult to create counterfeit coins. The first cryptocurrency, BitCoin was created by Satoshi Nakamoto, which is a pseudonym for a person or group of people (we don't know who they are). There are now many other cryptocurrencies and a lot of them have names very similar to BitCoin, such as LiteCoin and NameCoin. 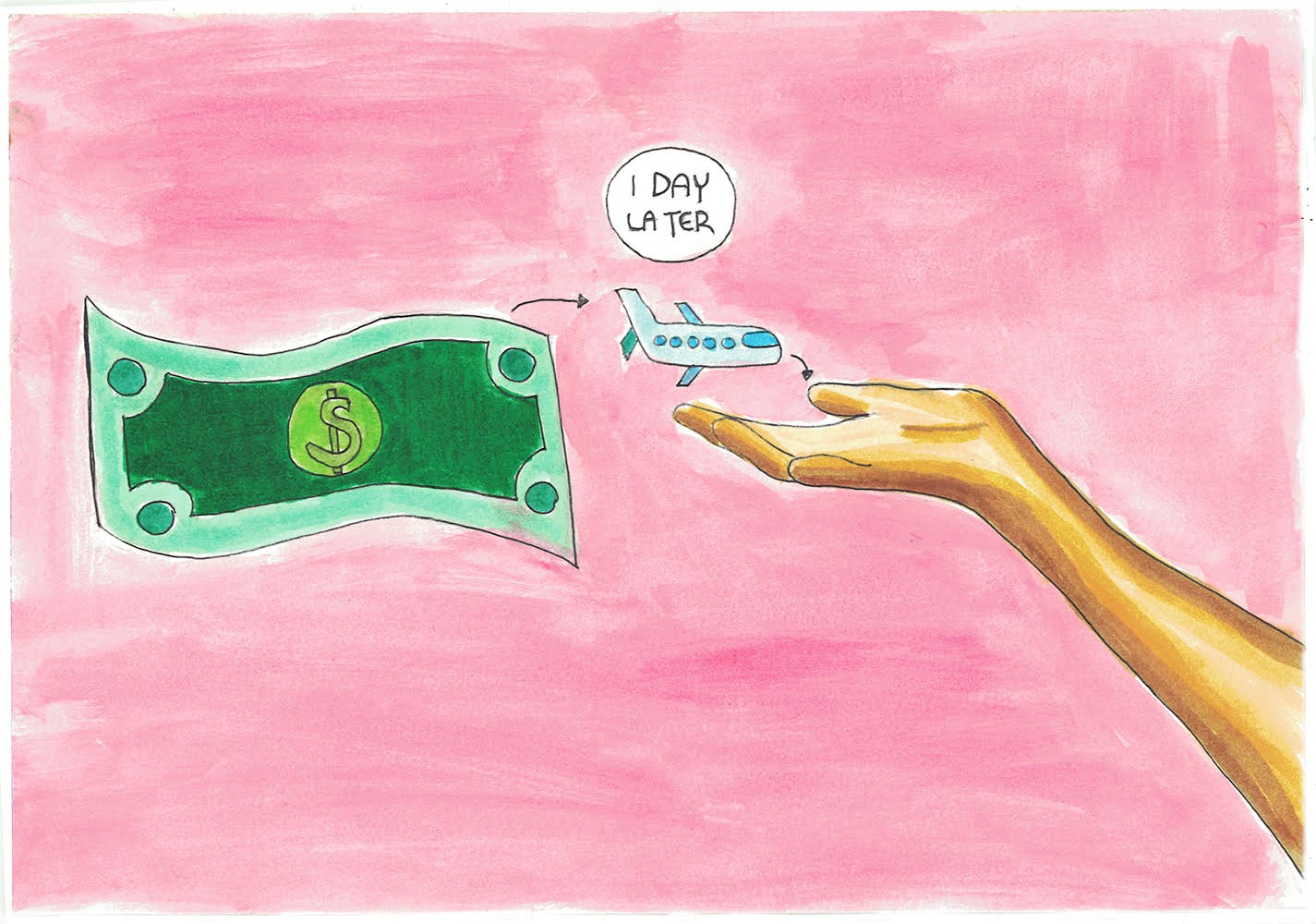 (Image description: A US dollar with an outstretched hand and a plane into between as well as the words "one day later" on a pink background to symbolize the fastest way to transport cash.)

There are a few main reasons that cryptocurrencies were created:

Cryptocurrencies are the fastest way to have money travel from one person to another over a far distance. Each transfer is not free, but there are only a few fees involved. Some cryptocurrencies are made just for monetary transfers, like Ripple. Another benefit cryptocurrencies offer is that they are separate from a specific government, which can make them more volatile (which can mean that it's a great investment), but also means that it can offer stability in countries where the value of money fluctuates often. If one is unsure of what a decision will do to their economy, they can invest in cryptocurrencies and then wait until afterward to see if they want to put that money back into their native currency. This can be especially important when there's a trade war going on.

BitCoins and other cryptocurrencies are also very secure. When coins are passed to different people, those lists of transfers are protected from hackers and the data is copied in any computer using the software for Bitcoin. The person who owns the computer, however, has no access to it. To clarify, computers only have access to local data. Computers solve puzzles to make a partial entry in their ledger (of Bitcoin's financial accounts) which needs to match other computers doing the same puzzles which makes the system decentralized.  Unfortunately, if only one computer has a transfer list and it crashes, the data will be lost since there is no one place where the information is held. However, this is highly unlikely because as stated before, the information is held on many computers.

Cryptocurrencies are not fool-proof and over the last decade, there have been around forty hacks. One was for over a million USD. While this may seem like a lot of money, keep in mind that there are many different types of cryptocurrencies and banks get hacked as well, often for much more. Also, unlike banks, each Bitcoin transaction is kept in a protected ledger in hundreds of thousands - or even millions - of computers, all of which a hacker would need to convince to change their ledgers. (Which, if you've ever tried to convince millions of people to do anything, you would know is rather hard.)

Money launderers and tax evaders can be drawn to cryptocurrencies because of its ability to help users stay anonymous. (But to say that we should stop using cryptocurrencies because it helps nefarious people is like saying that we should stop using cash because of drug deals.) While they are not as safe as cash, BitCoins are very hard to trace because there is no centralized place holding the data. There is no list of who does what with BitCoins, since no one has the authority to take the data. This can make it very hard to track the people who use BitCoin, which also makes it very safe.

Of course, there are other reasons why cryptocurrencies were created, but these are some of BitCoin's core attributes. These are also not very nuanced descriptions, but they are an overall idea of cryptocurrencies. 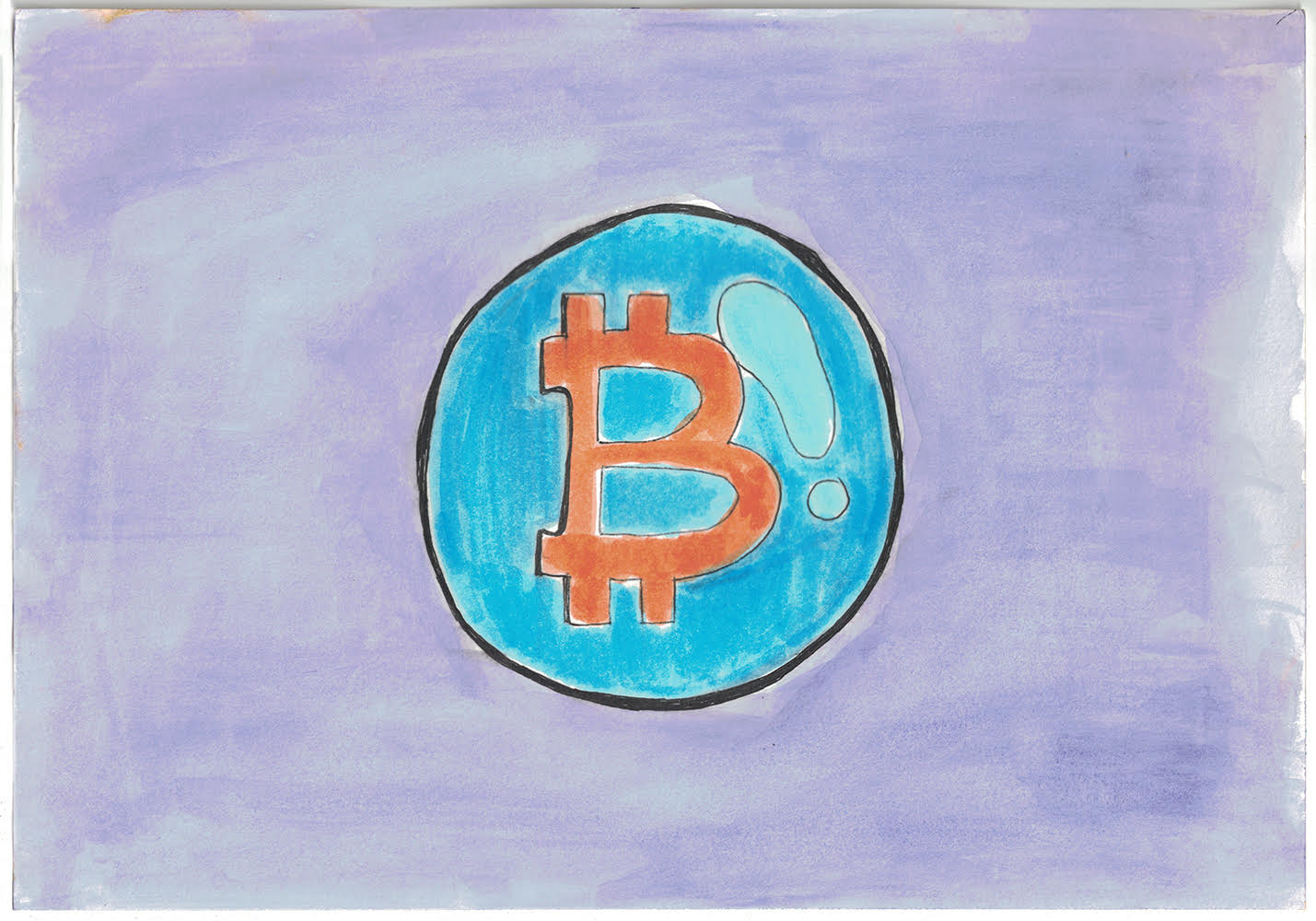 (Image description: An orange Bitcoin logo inside a blue bubble on a light purple background.)

Now, let's talk a little bit about the future of BitCoin and other cryptocurrencies and some myths about it.

Right now, there's a bit of "been there, done that" attitude. It's easy to fall into the trap of thinking that Bitcoins aren't doing well because they went from around 18,000 USD to only about 6000 USD. While its three times less now than what it was at its peak, what gets forgotten is that BitCoins never should have been that expensive. It was a bubble for some time, tripling in a few months. On Google Trends the number of searches used to be much higher and for the past few months have been slowing down and staying about the same. But as the price for Bitcoins is flatlining, it makes it harder to lose money. Cryptocurrencies aren't supposed to be investments - they're supposed to be used to facilitate the exchange of goods and services. Now that it's steadier, it can start actually doing that.
Something to note here is that there was something that caused Bitcoins and other cryptocurrencies to peak: halving. It decreases the amount of Bitcoins and cuts the amount cryptocurrencies miners make. The next time this will happen is in 2020, and depending on where we are then, it is very possible that this could lead to another spike, if not sooner.

Another feeling that's been going around is that Bitcoins are worthless. Bitcoins are not worth anywhere near as much as they used to be, but 6000 is nothing to scoff at. In fact, two years ago it was worth about 600. If you do the math, that means that it's worth 10 times more. That growth rate is something you won't find in the stock market as easily! Bitcoins started at pennies and now they've risen to so much more than the creators ever thought they would. 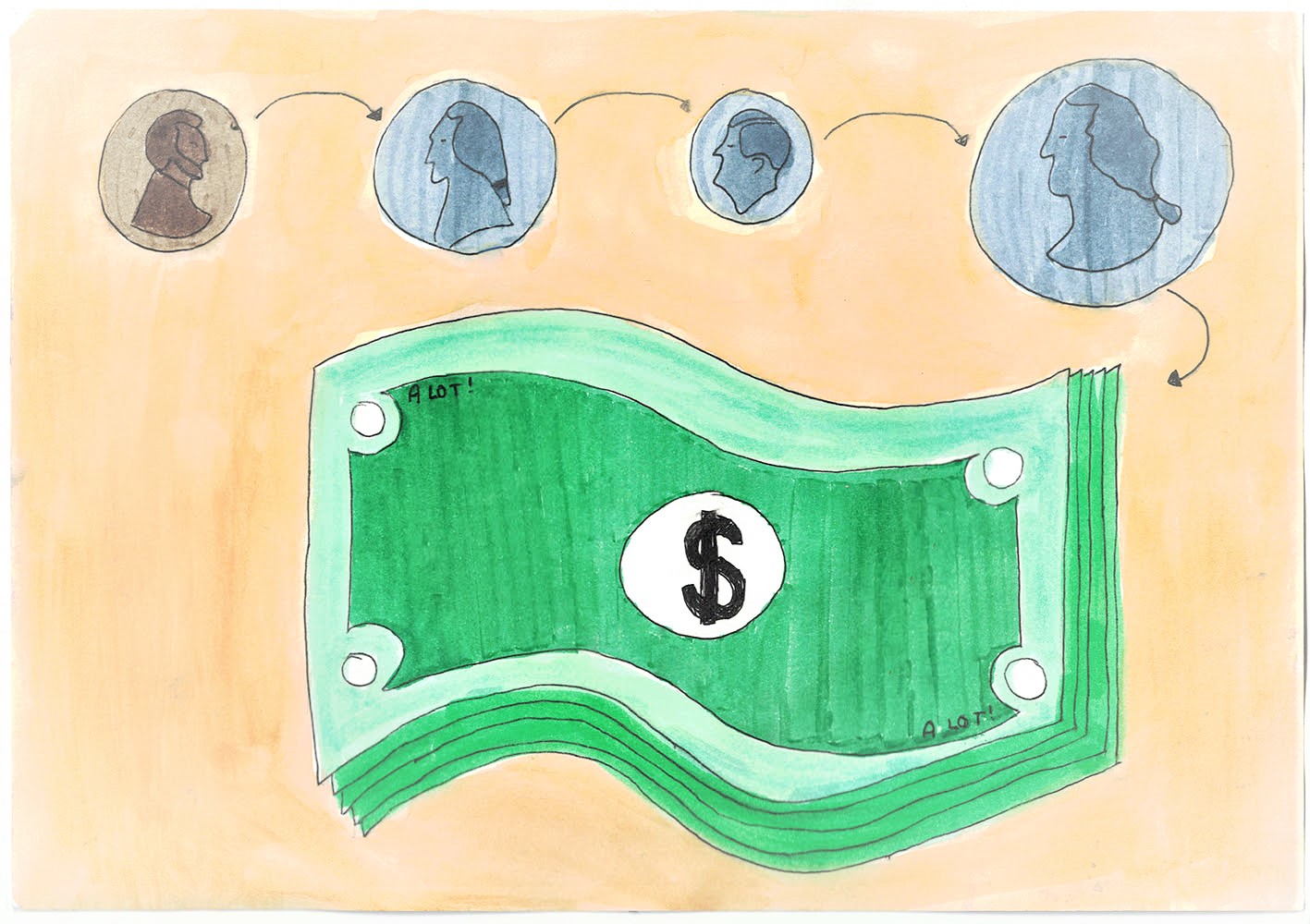 (Image description: A penny, nickel, dime, quarter and multiple USD with arrows connecting them to symbolize how much Bitcoin increased in value.)

Bitcoins are a currency - albeit one that is incredibly difficult to use. Besides how hard it is to buy them, you can't exactly use them everywhere. (Try walking into your local coffee shop and pay them in Bitcoins.) While they can be a great investment, it’s not their main purpose. This is especially true for Bitcoins, as currencies worth pennies can easily increase ten-fold. A lot of times people forget that Bitcoin is more than just a number on a paper. Right now it's not being used as a currency the way you would use a dollar bill, but it's just something to keep in mind. We can't expect that Bitcoin should just keep on growing and growing or be disappointed when it drops a bit. Stocks and even the US currency fall all the time - Bitcoin is no exception. One day cryptocurrencies will actually be used for their intended purpose, but that won't happen until people move away from the mindset of it being an investment and when Bitcoin becomes more user-friendly.
However, to make it clear this is not meant to direct how one should use their cryptocurrencies. But rather to show it's important to also keep in mind their intended purpose. Not to mention, Bitcoin is also partially at fault. Their platform isn't user-friendly and because the price varies so wildly people don't want to spend their money and then 15 years (0r 5 years) later look back on it and realize that they could've made millions if they held onto it. There are actually solutions to this issue that still run on blockchain and that still are secure and etc. but don't vary in price. (To be clear, the coin is tied to USD so they fluctuate together for the most part.) Stablecoins as they're called, are more of the currency type of coin, as opposed to Bitcoins which seem to be more for investing in. 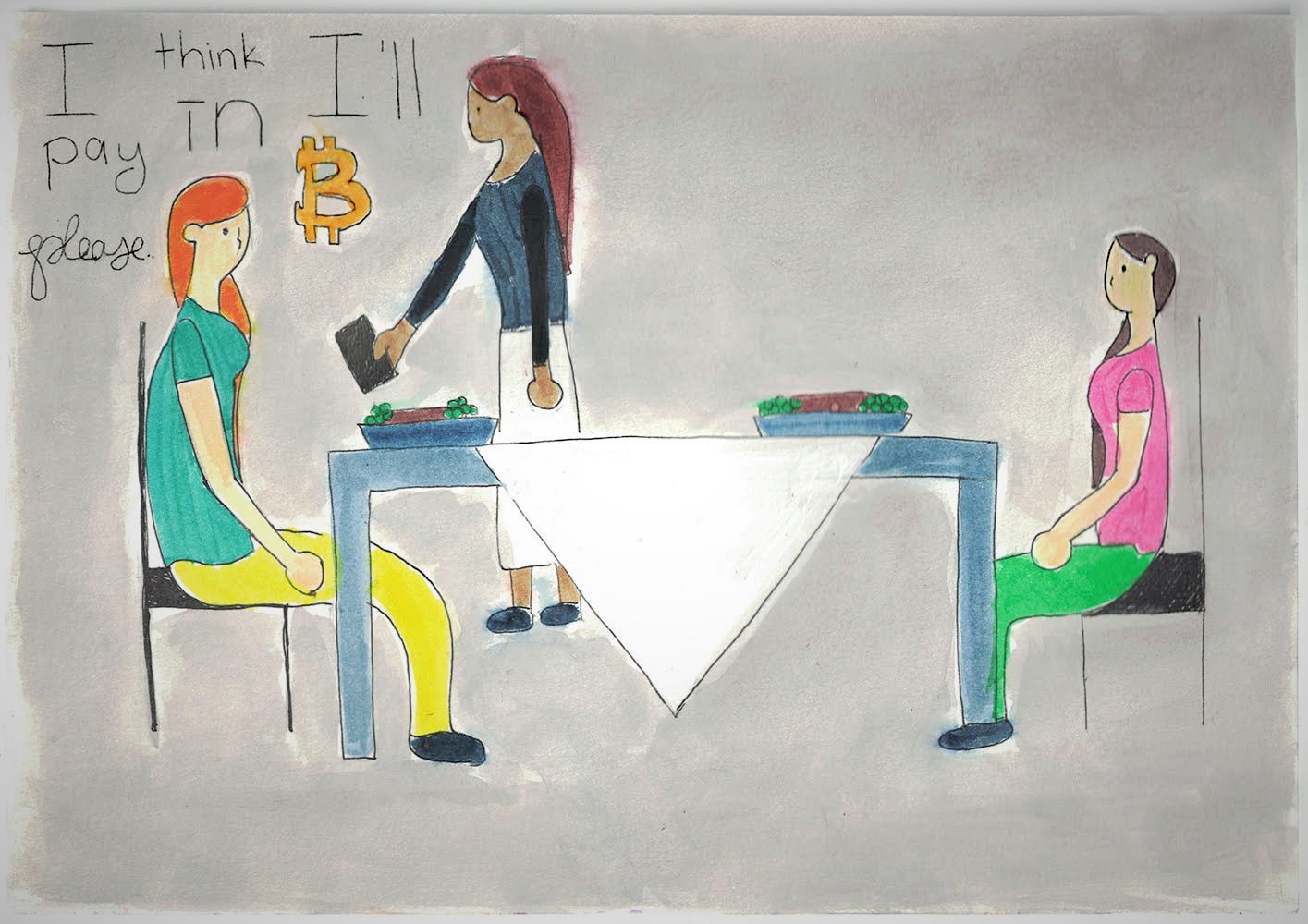 (Image description: Two women at a dinner table with one telling her waiter "I think I'll pay in Bitcoin, please." on a gray background.)

There are many concerns about Bitcoins, many times people are overly concerned and more cautious than they would be with something familiar, which is of course, understandable. A new concern is that Bitcoins aren't moving around a lot - instead, people are just holding onto them. This is mainly due to the fact that people think that they can fetch a better price later or that they want to wait before selling. The statistic that has been going around is that 10% of Bitcoins haven't moved around in the last 12 months. The issue with this is that, most obviously, there are a lot of Bitcoins, but it also has to do with the purpose of Bitcoins. A lot of USD isn't in people's pockets, rather they're sitting vaults, unused. Also, this means that 90% of Bitcoins have been transferred in the last year, a lot considering that Bitcoins used to be worth nothing.

Many times criminals have used Bitcoins for threats to gain money. There have been businesses threatened with grenades and civilians threatened with losing all of their files. (Though mostly the latter. The first example was more of a one-off.) Of course, these crimes allow criminals to hide beneath the blockchain technology, though for many years criminals would ask for money transfers to foreign bank accounts which are now traceable. But it's important to think more about what happened. This story was shared because of people's fear and the chain of fear and sharing continues on. While this article is not about it, news is often optimized on people's fears because that's what gets the most clicks. This is the same for dramatic events already capitalizing on existing worries like with cryptocurrencies. 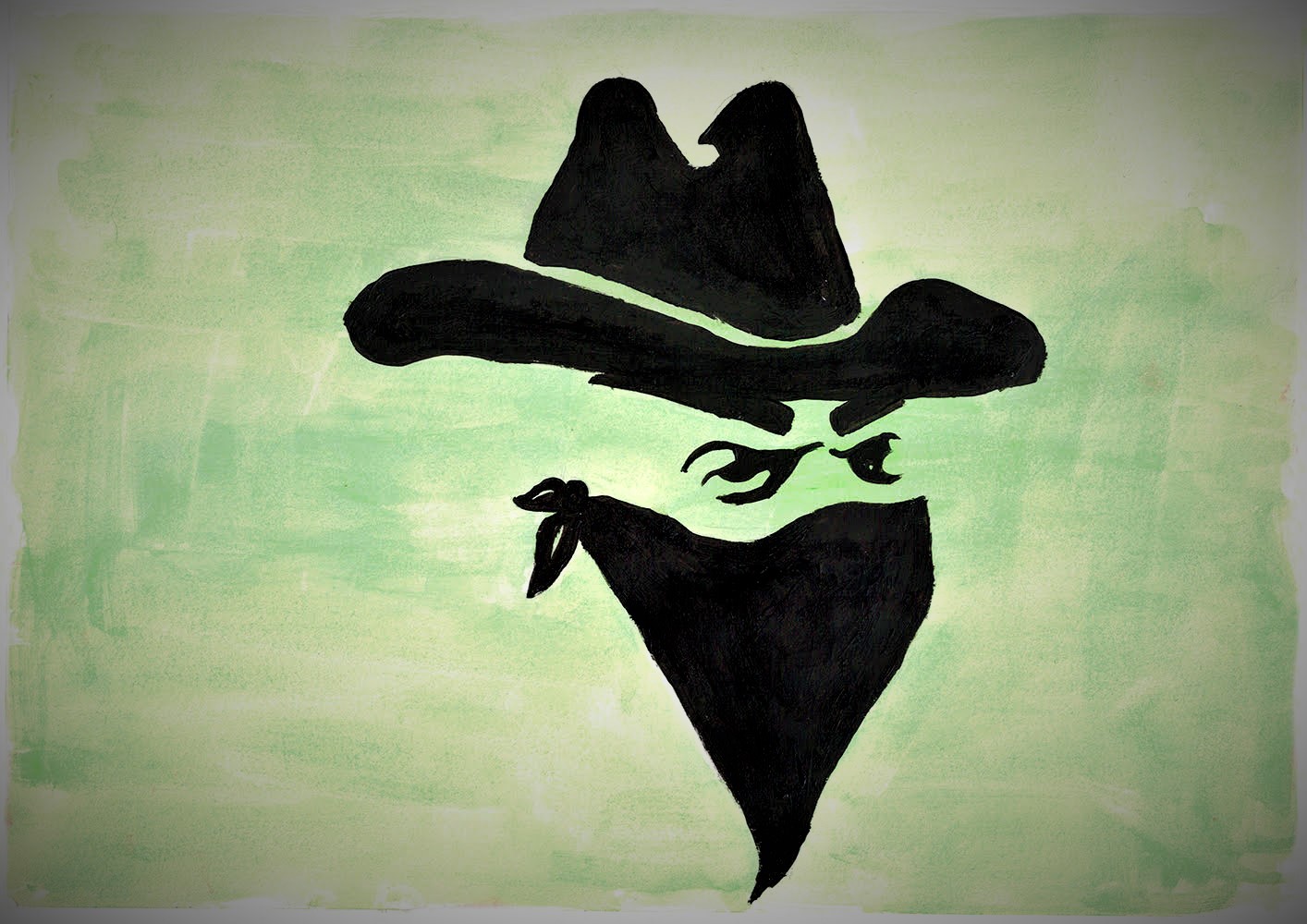 (Image description: A simplistic image of a bandit in black with a green background.)

Another thing to keep in mind is why the hackers are able to take files hostage. A comparison goes as follows: if you leave your door unlocked, a burglar is more likely to be able to steal your stuff. This is true for computers as well. Without the proper knowledge and precautions, a hacker can more easily hold your files hostage.

Investments always come with risks, including Bitcoins. However, this doesn't mean that, as some articles suggest, that people should be prepared to lose their entire investment. This is, in a way, saying that we should be prepared to lose all of our money because the government could make a terrible decision that makes USD or any other currency worthless because nothing backs it other than its users. Bitcoins is intrinsically worthless, but at the same time, it isn't, just like stocks. They aren't backed by something like gold and are only worth what people perceive. Bitcoin does happen to be riskier because there are fewer people invested in it and say, the future of an entire country with millions of people isn't riding on it, but there are advantages to that. The price of oil isn't going to increase dramatically whether you wait 10 years or one year, adjusting for inflation. This is because it bounces up and down. However, cryptocurrencies have increased dramatically, and have the potential to increase ten, twenty or thirtyfold. Cryptocurrencies are risky, but they also have incredible potential.
birthday Bitcoin blockchain computers cryptocurrencies economy finance money SydneyBlu technology