Celebrating Day of the Dead in TO 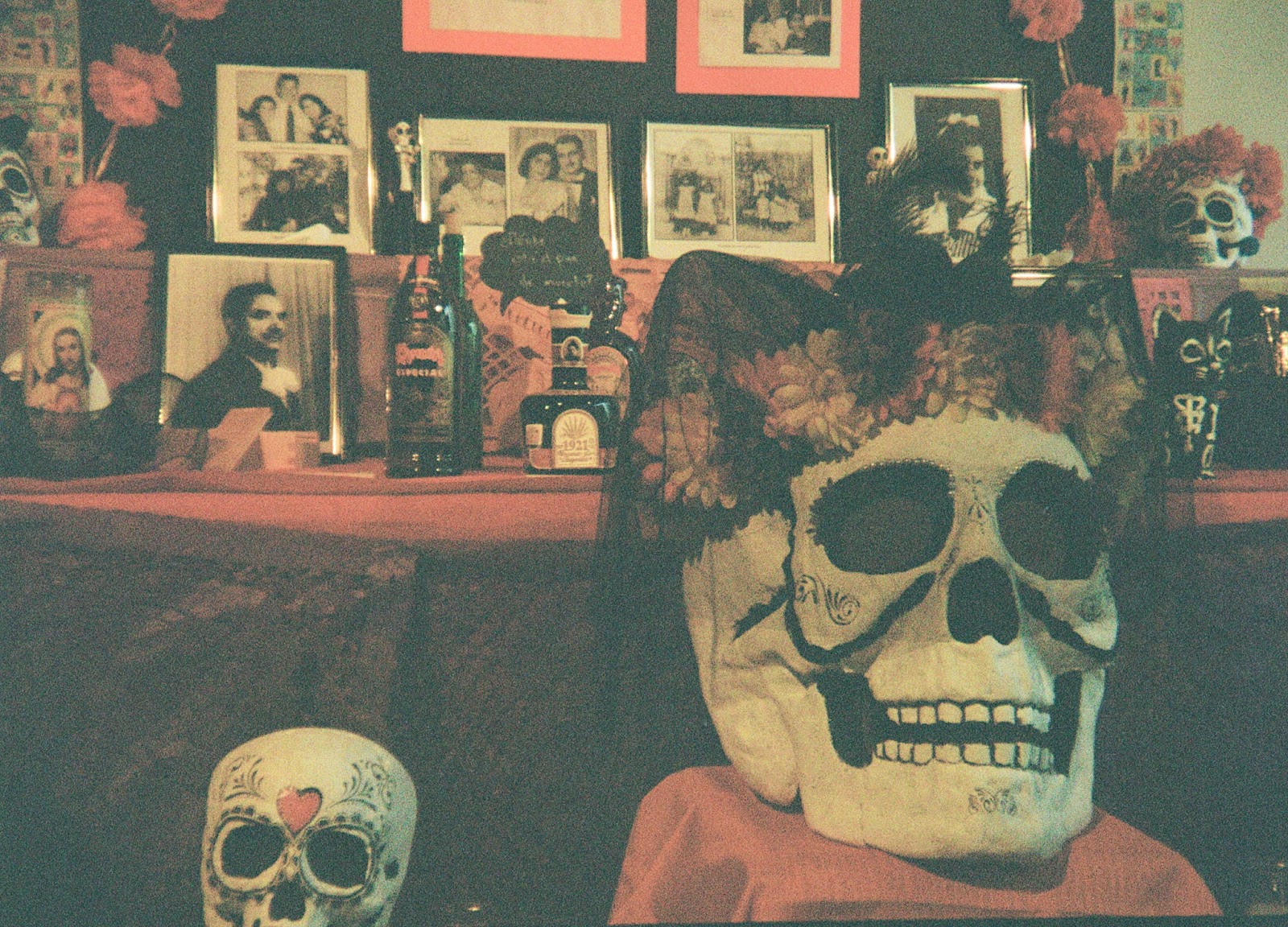 Image description: A film picture of one of the decorated alters - filled with framed images of the loved ones, bottles of drinks, candles, figurines, and painted skulls adorned in red and yellow marigolds - at the Day of the Dead event at Harbourfront Centre on November 3&4 2018.


Article and photography by: Adele Lukusa

For the first time in my life, I went to celebrate the Day of the Dead. It started off as part of an event I had to shoot video of for my journalism class and ended up being much more for me.

Before going to these two events - one on October 28th at Evergreen Brick Works and another on November 3rd and 4th at Harbourfront Centre - it just so happened that my siblings and I had watched two films that were themed around the Day of the Dead. Whenever I came home from uni, I would find some way to get all six (or at least five, considering my youngest sibling is only a year old) to watch something together - and so we ended up on Netflix watching both Coco and The Day of the Dead. It’s a funny coincidence, now that I think of it, that I ended up actually attending this celebration, and I’m really glad I did.

Image description: At Evergreen Brick Works, someone sells food at one of the multiple stands present at The Day of the Dead celebration on October 28th. 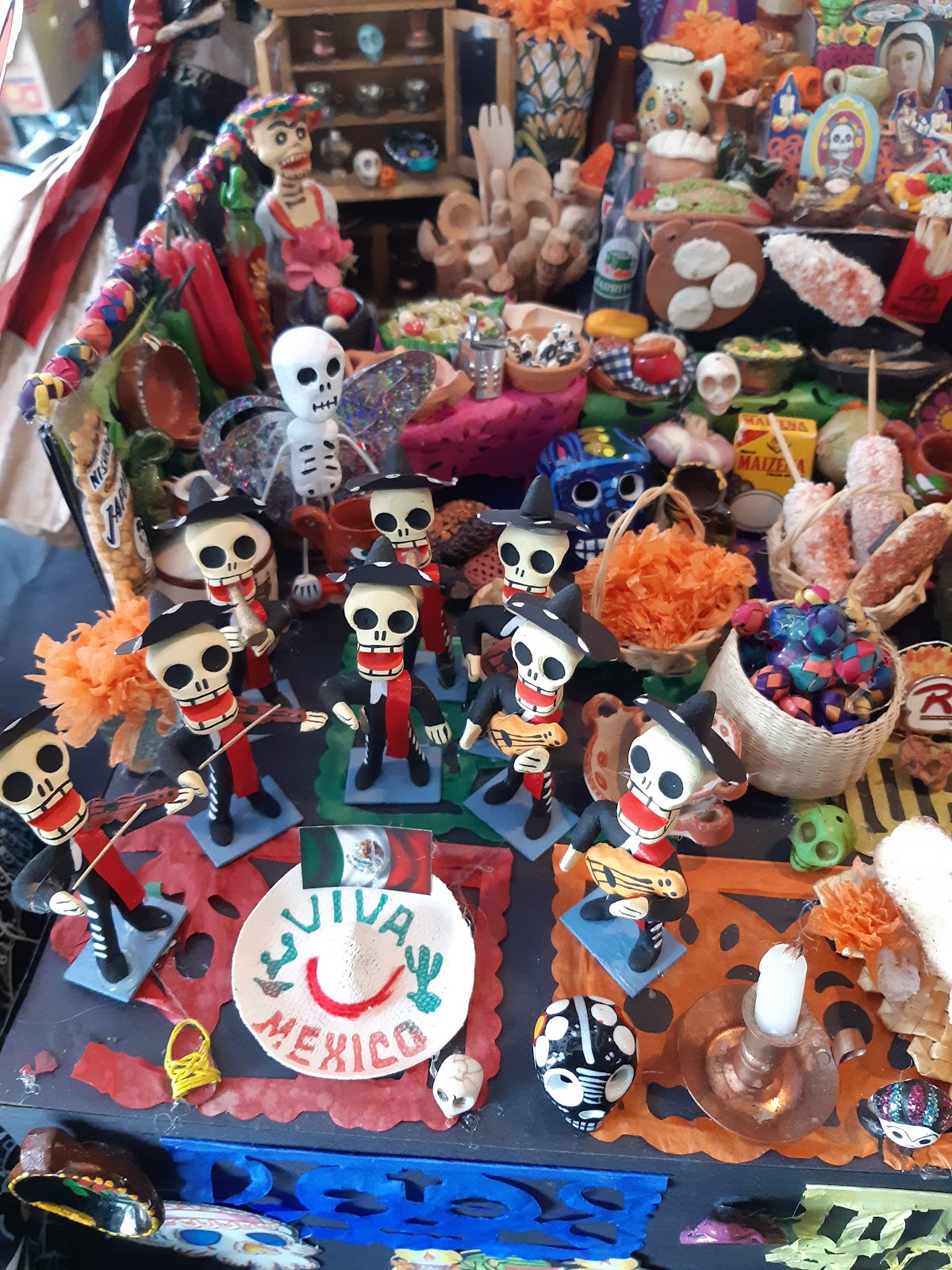 Image description: A closeup (taken on my phone) of a figurine Day of the Dead celebration. The picture shows mini skeleton dressed in black, white and red with instruments in hand playing around a sombrero with the words “Viva Mexico” inscribed on it in red and green. 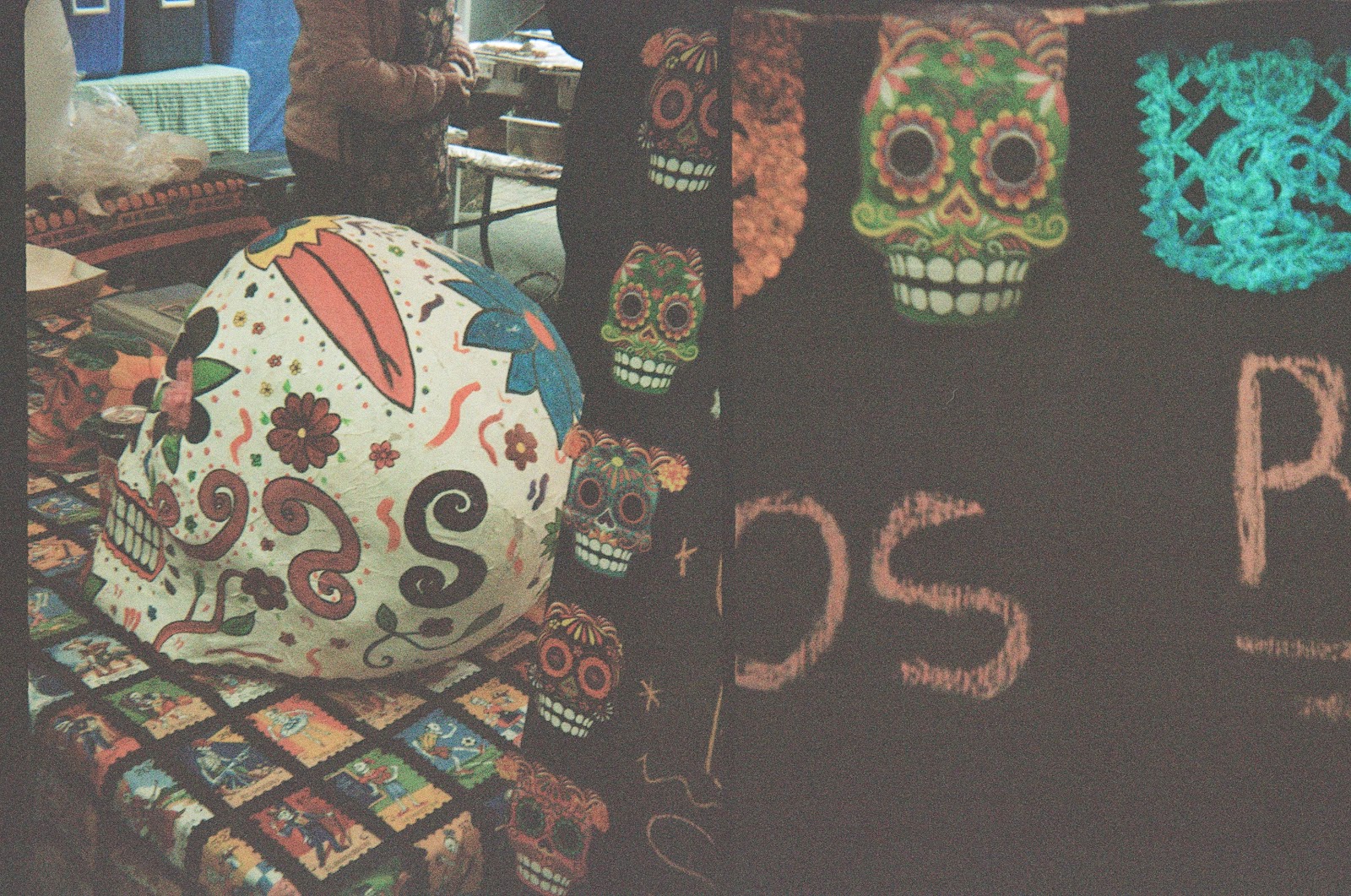 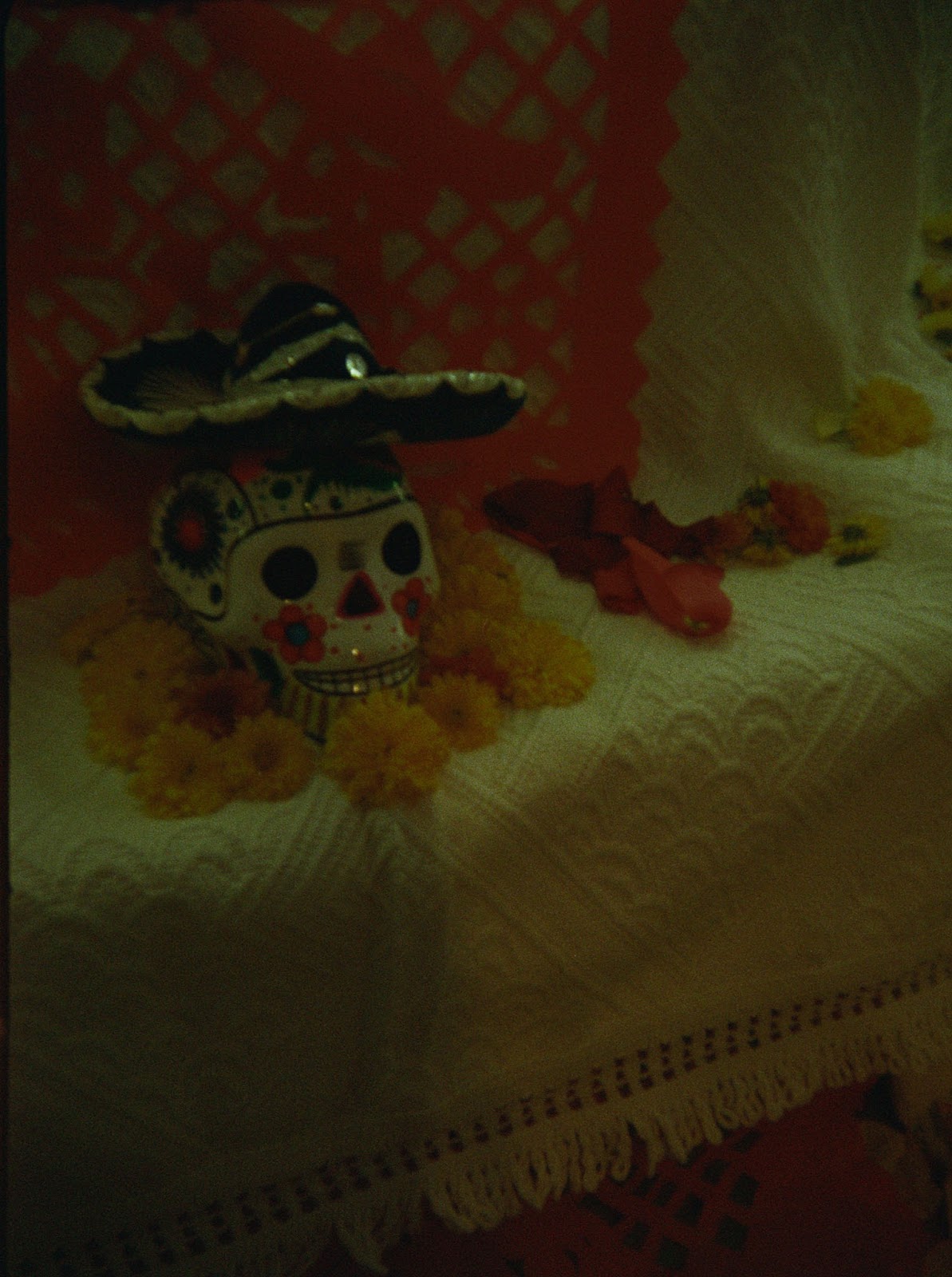 Image description: Two pictures on the film side by side of decorated skulls, the one on the right with a black and gold charro hat on its head.

One of my favorite parts of the Harbourfront celebration was the detail put into the event. It was much more artist-based, while the Evergreen Brick Works event was community-based. 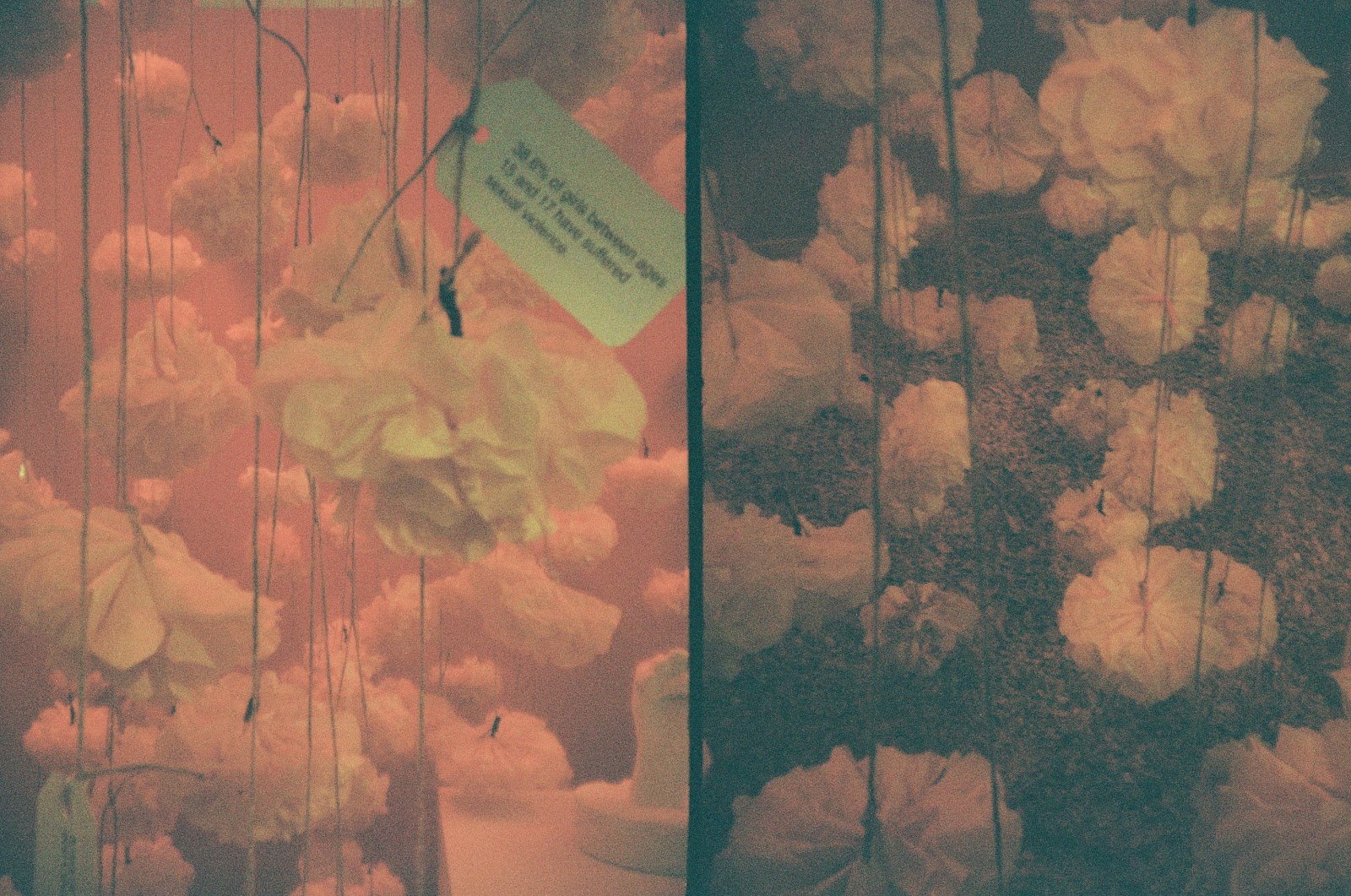 Image description: Two side by side film pictures of a bunch of orange magnolia flowers held together on strings hanging from the ceiling. Some have tags with facts while some don’t.


But by far the best part, in my opinion, were the altars made in offerings. For this celebration that was born in Mexico and is celebrated by multiple Latinx communities, is the importance of offerings. They commemorate the dead with an altar in their honor, decorated in pictures, trinkets, art as well as Mexican marigolds.

But by far the best part, in my opinion, were the altars made in offerings. For this celebration that was born in Mexico and is celebrated by multiple Latinx communities, is the importance of offerings. They commemorate the dead with an altar in their honor, decorated in pictures, trinkets, art as well as Mexican marigolds.

Image description: The bottom half of an offering altar, in the center lays a paper mache skeleton circled by marigolds, candles, mini skeletons, and other little tickets. Behind it lays the feet of a full skeleton sitting on a black throne. 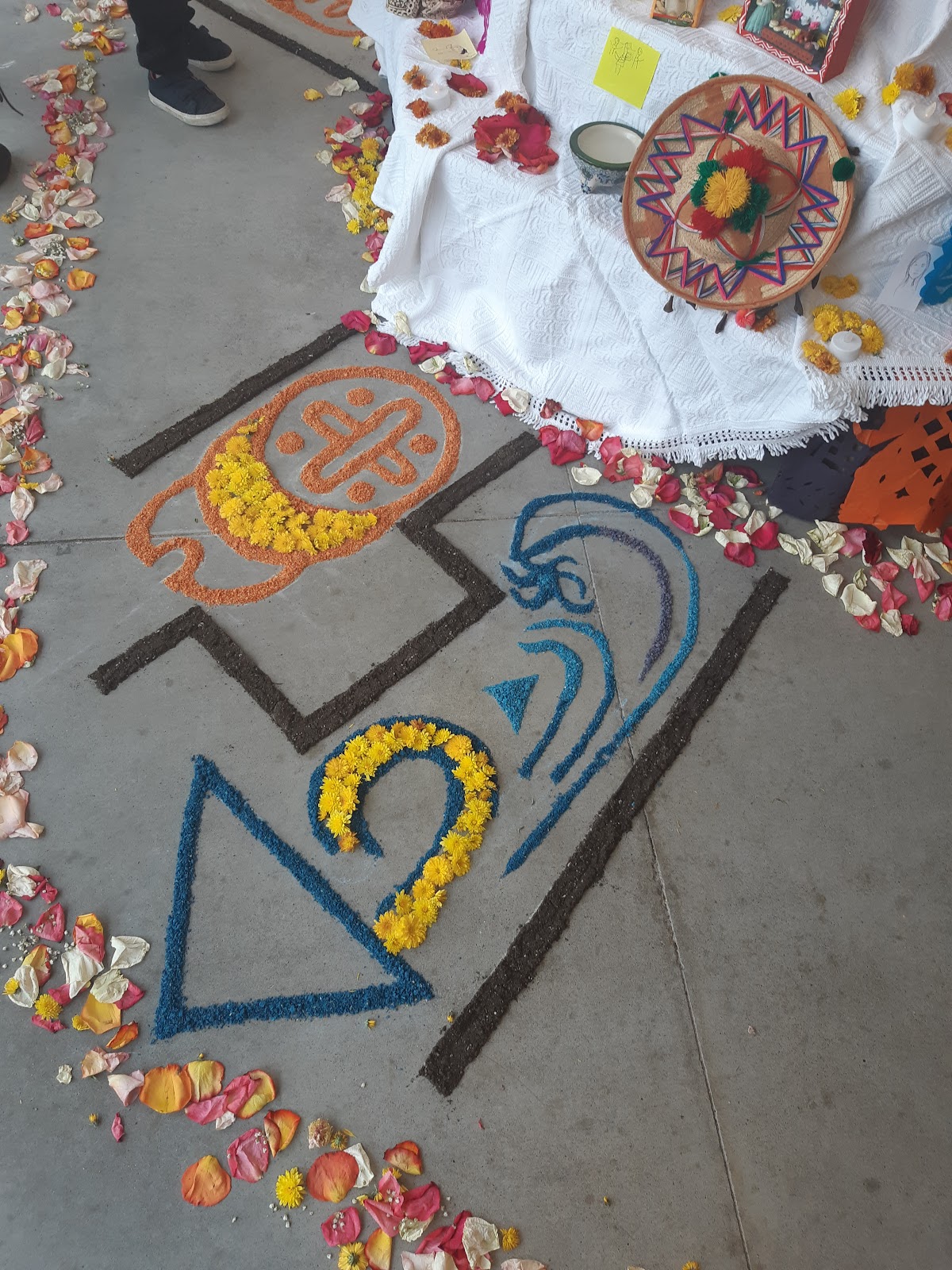 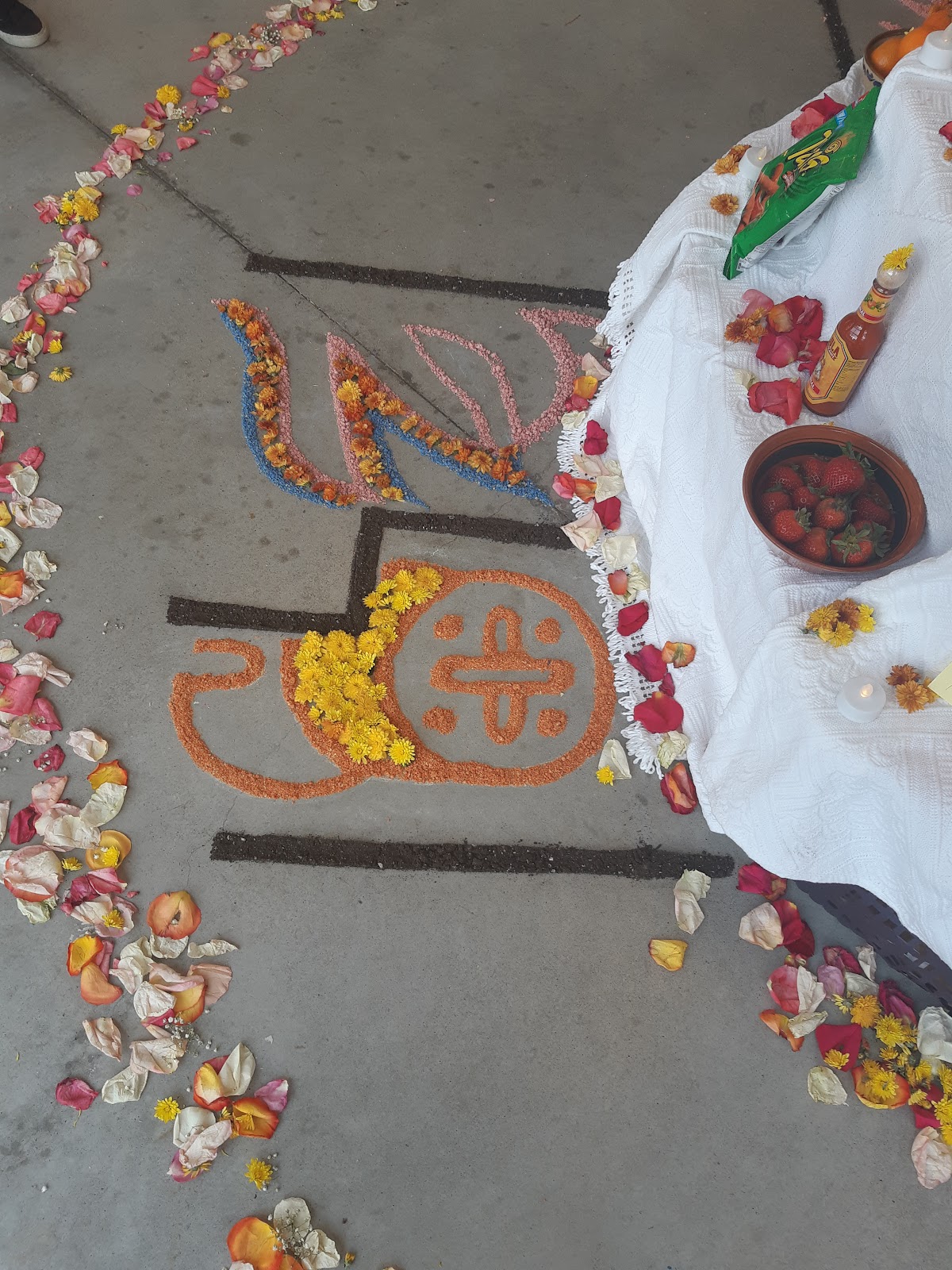 Image description: Two pictures side by side of the same altar as well as symbols drawn in flower petals and seeds. 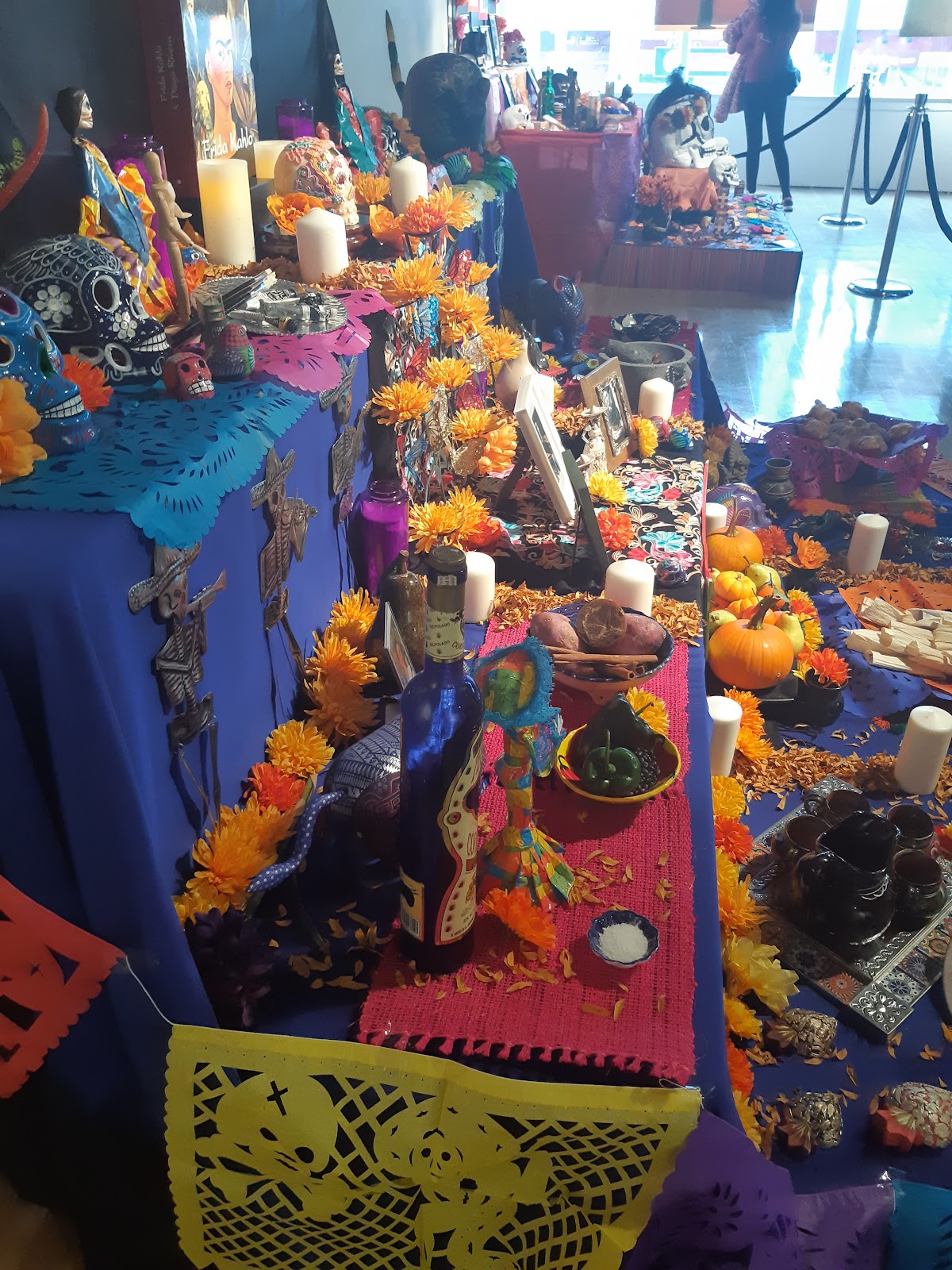 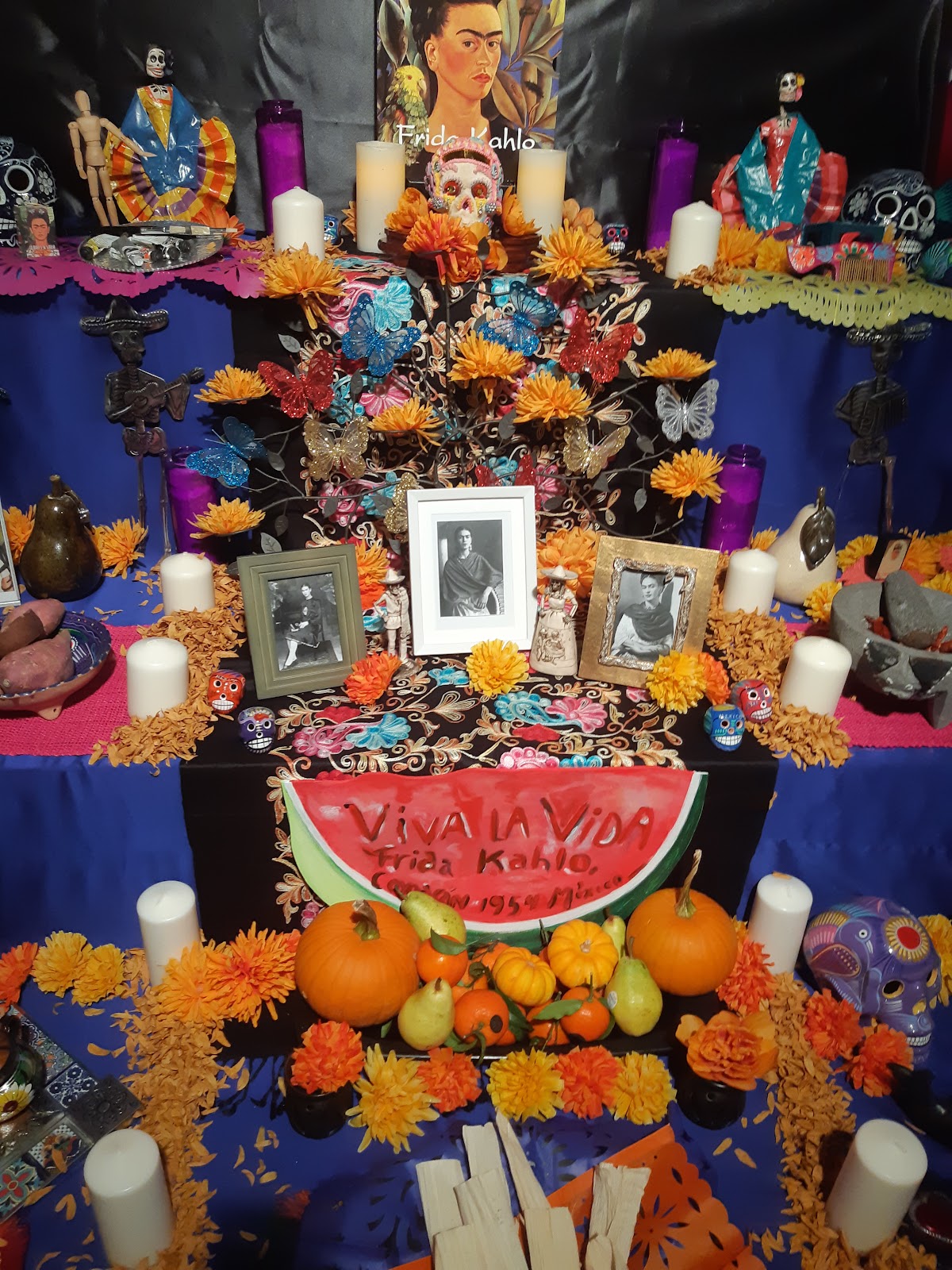 Image description: Two pictures of the same altar dedicated to Frida Kahlo, in different angles. The alter has three stages and is decorated with pictures, skulls, marigolds, mini pumpkins, candles, and painted figures. On the highest stage in the center is a book on Frida, one of her self-portraits on the cover. 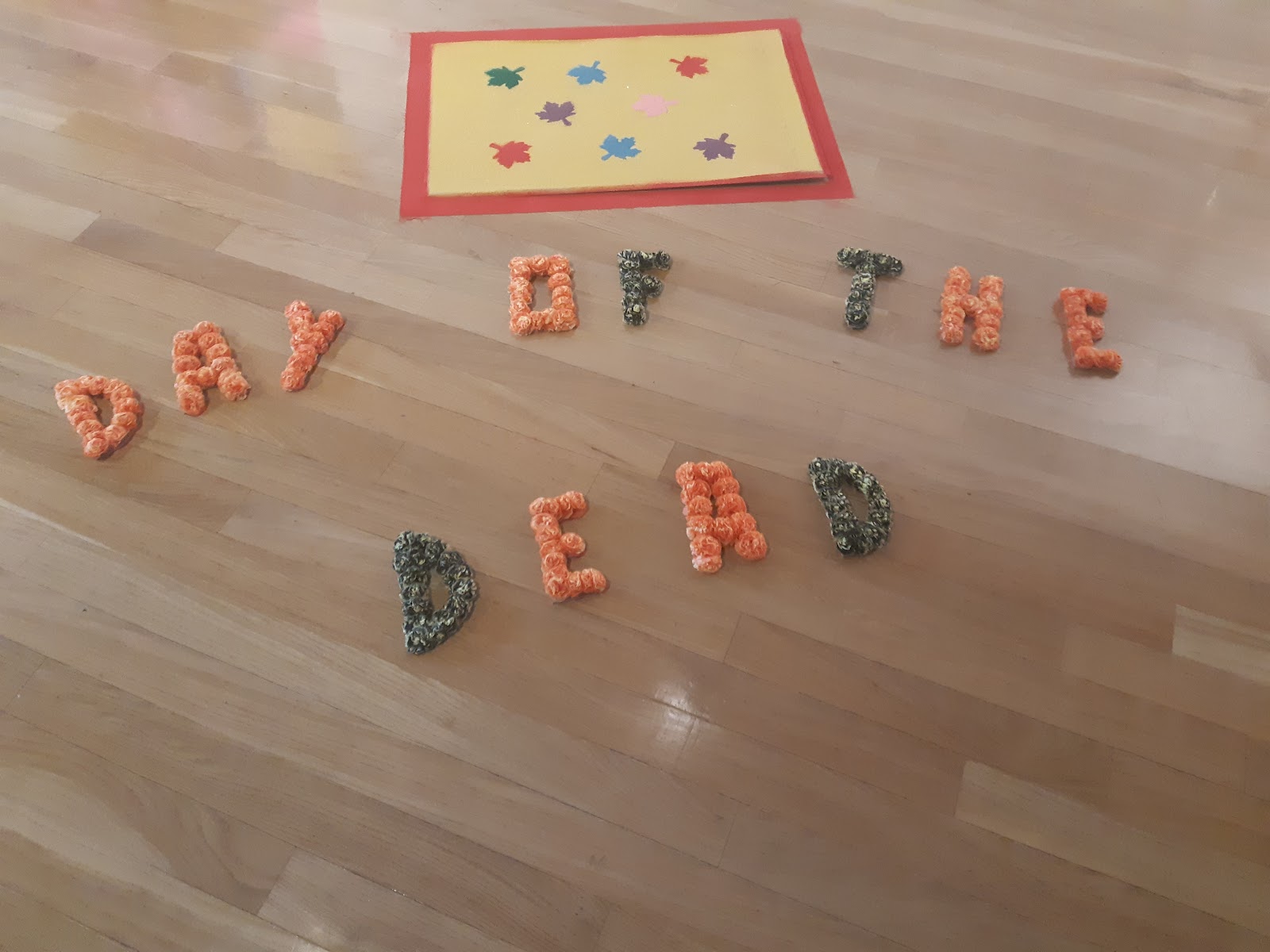 Image description: On the floor next to one of the altars is written “DAY OF THE DEAD” written in green and orange marigolds. A red and yellow poster lays above it, with stamped leaves in multiple colors.