on October 14, 2018
Turning Anger Into Art
By: Keira DiGaetano
TW: sexual assault/harassment mentions (in reference to Kavanaugh and Dr. Luke) 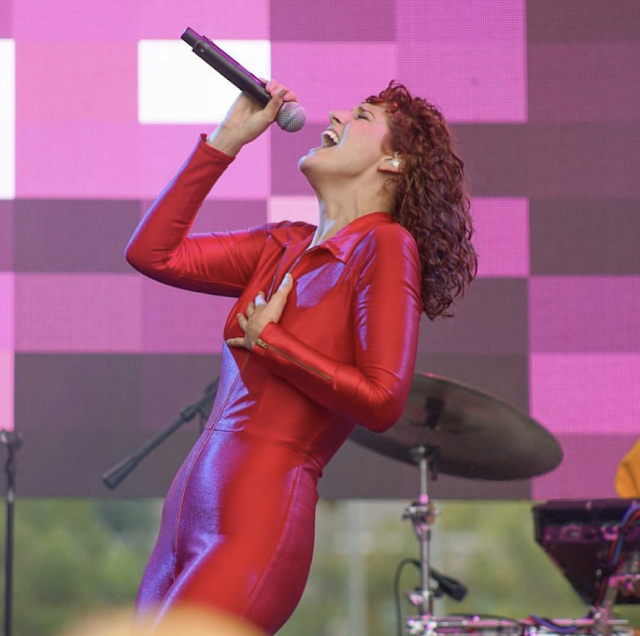 [Picture of LPX (Lizzy Plaplinger) performing at the All Things Go Fall Classic Festival, which she co-curated]

Disclaimer: This is entirely the author’s personal opinion and doesn’t necessarily represent the views of Risen. Also, the “all-female” lineup I make reference to throughout the piece included wonderful non-binary artists as well, but I refer to it as “all-female” because it was branded as such by the festival.

What does October 6th, 2018 mean to you? For a lot of women, a lot of people, it was a nightmare. While most of the world refreshed their news sources in disbelief that someone as despicable as Brett Kavanaugh could be appointed to the Supreme Court, I steeled myself against my emotions and headed out with the ticket I’d bought six months prior to the first all-female music festival. DC’s All Things Go Fall Classic music festival is in its fifth year, this year devoting one of its two days to solely female artists, selected by indie singer Maggie Rogers and rock powerhouse LPX. The significance of such an anti-woman decision occuring at the same time as a historic feminist milestone, in the same city no less, was not lost on anyone attending the festival. Every singer I saw perform brought up Kavanaugh in some form during their set. LPX simply alluded to the difficulty of enjoying the day, while Jessie Reyez took her protest one step further by encouraging the audience to raise our middle fingers to the sky, jumping as high as we could while she screamed her frustration into the microphone. Unsurprisingly, outspoken teen Billie Eilish led the crowd in a chant of “Fuck Kavanaugh!”, while quietly fierce Maggie Rogers performed songs in front of a projected image of Dr. Christine Blasey Ford. The female lineup had attracted a largely female crowd, and in that mob of women determined to enjoy themselves, even on the bleakest of days, the best word I have to describe how I felt is ‘safe’.

When I heard All Things Go would be hosting the first all-female lineup of a music festival, I was admittedly confused. As someone who goes out of their way to pretty much only listen to female musicians, it seemed like a no-brainer to me that there’d have been an all-female lineup somewhere at some point. Turns out, there hadn’t - people still rely on men to sell tickets, of course, which can often give them an easier path to commercial success. Before breaking into her aggressively draining “Gatekeeper,” Jessie Reyez told the audience the story of her rise to the top. She was warned by an unnamed record producer that she was a good enough singer, but to get to the top, she would have to “suck dick.” While fame isn’t gained easily by anyone, these tales reach their bony fingers out, like monsters under the bed, to any woman attempting to succeed in the arts. For all of the dancing and exuberance on stage, it would be hard to find one successful female singer who doesn’t share a similar experience. Sexism in the music industry always catches me off guard, but it shouldn’t at this point, given such recent high-profile cases as Kesha’s battle with Dr. Luke and Taylor Swift’s famous one-dollar lawsuit. Still, despite their underlying anxiety and anger, the women who graced the festival’s stage exuded happiness and strength.

I think that female artists are so resilient in the face of fear because we’ve been told that our emotions our only valid in the form of art. Art makes anger palatable for the masses, relatable to men and analyzable for high school English classes, not so harsh as to remind us of how dangerous the truth is, but moving nonetheless. Our yelling doesn’t have value, our soft-spoken but well thought-out speeches are boring, but art is acceptable. This is why female artists are the ones who lead the protest - we’ve already learned to play along with the format through which the world wants to consume our feelings. Even the aforementioned Taylor Swift, who has been both criticized and applauded for her prior refusal to come forward with her political beliefs, recently made a long and detailed post promoting a democratic candidate in the upcoming midterm. This final stance took years to emerge, and if I had to guess why it took so long, I’d think the cause was fear that her voice would only ring true for people in her songs, not speech. We need more platforms for women’s voices outside of five-minute-bits in between songs at concerts, so that testimonies like Ford’s don’t seem so jarring to the general population. I want more all-female lineups, more women protesting into megaphones, more people realizing that art is not the only change that women can create. We have to believe women, no matter whether they’re singing or shouting.