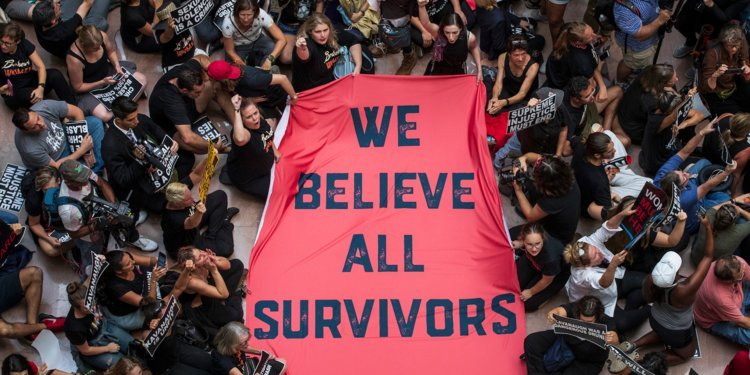 
It is October, and the air is rife with the spookiness of political corruption.These past few weeks have been a Brett Kavanaugh-induced haze of anxious waiting and political turmoil. But now the waiting is over, the smoke has cleared, and we have all been left somewhere between exhausted and exasperated. First, I would like to say that I am in awe of Dr. Ford, who calmly and articulately spoke her truth, knew she was going to be destroyed for it, and did it anyway. That is the highest point a person can reach on their moral ladder. During the hearing, The National Sexual Assault Hotline received a 201% increase in calls according to officials at RAINN, who run the hotline. We live in a society that inadvertently and advertently victim shames. Sometimes it’s subtle, the excuses and the sexist mantras. “Boys will be boys.” The head shaking, the she-had-it-comings that don’t have to be said aloud for us to know what they mean. A woman’s body wields so much power over the media and even politics, yet we don’t have the power to tell the truth about our very bodies in question. It’s ironic. But we do have the power to try. It only takes one person to spark many more. And for that, I am thankful.


My friends and I have spent countless hours ranting and raving, deliberating on the final outcome, and feeling the weight of injustice yet again on our teenage shoulders. The sad thing is, Dr. Ford’s experience 30 years ago is one we are all too familiar with today. Many teens still don’t understand what consent really means, and they carry that with them into adulthood, where denial is easy.


Here is what I wrote in my journal after watching the hearring on a long flight home: Fuck you. Black boys get sent to jail for their whole life because a white, pot bellied cop thinks he smells weed. But you can put your genitals in a girl’s face and then become the face for justice everywhere. You can hold the wooden gavel with one hand and clamp a mouth shut with the other. You can silence one voice and then silence thousands more while sitting on the highest seat in this broken land. So fuck you. Because I am the same age as the woman you almost silenced. I am 15 and I wish I could say that I’m surprised. Disappointed, not surprised, is what I keep telling people, but disappointed doesn’t even skim the surface of the hurt and the heartbreak, the loss of hope. So fuck you. Because a 15 year old girl is dealing with enough. Learning how to drive, college on the horizon, work, managing money, emotion and unexplainable sadness. A 15 year old girl is somewhere between child and adult. A 15 year old girl is fragile, but cannot be broken. You could not take that away, and neither can anyone who dares try. Dr. Ford remembered it all: the beer and the sound of your voice. She has carried this with her for over 30 years. And now we will carry it too.

Will my daughter have to hear this story, the way I heard the story of Anita Hill? There’s a trail of cautionary tales that doesn’t seem to ever end. Will she have to fight for the freedom of her body the way women did in a pre-Roe V. Wade country? Will it ever stop? To feel pure, absolute disgust for another human being is a terrible feeling. Yet it claws at me, this ardent HATRED that I wish could be extinguished by healing the pain of victims in every corner of this pulsing, beaten, broken world. It is a hard, hard, time to be a woman, but when has it ever been easy. Trauma bears a heavy weight, Mr. Kavanaugh, heavier than your future gavel, but not as heavy as the weight of justice, which I can only hope one day swings the right way. We are done waiting for the until-there-is-no-longer. Take a closer look. We are screaming at the top of our lungs, and soon you will hear it. Fuck you fuck you fuck you. It feels good to write that.


I was angry when I wrote this. But sometimes anger breeds honesty, and sometimes that honesty is necessary in speaking your own truth. I don’t know how Dr. Ford is feeling right now, but I hope she feels as proud of herself as we do.  I hope her inner strength is letting her know that this is not a lost battle, but a stalling of what will inevitably come. Just as we have not forgotten the bravery of Anita Hill in 1991, we will not forget the candor of Christine Blasey Ford.  I am 15 years old, and because of the strength of these women, and many others, I am waiting for my time to come. We are all waiting for our time to come. And soon enough, they will be forced to listen.
feminism news sexual assault survivor