on September 21, 2017
Risen Favorites is a monthly series featuring Risen staff member volunteers who wish to share some of their favorite things from a given month. Topics can include anything from favorite places to favorite photos, favorite teas to favorite soaps. If you have a “favorite” item, place, or even social media account that’s out of this world, DM or email us and we’ll include it! In September, we’re covering events,social media, and more. Enjoy!

I attend Parsons School of Design so fashion is something that intersects my life every day. Besides being well known for fashion, the university is also well-regarded for its strong focus on social justice. Throughout the week, I’ve been attending shows for NYFW and stopped everything to make sure I could attend an event called “Fashion, Culture, and Justice” taking place in my building’s auditorium. 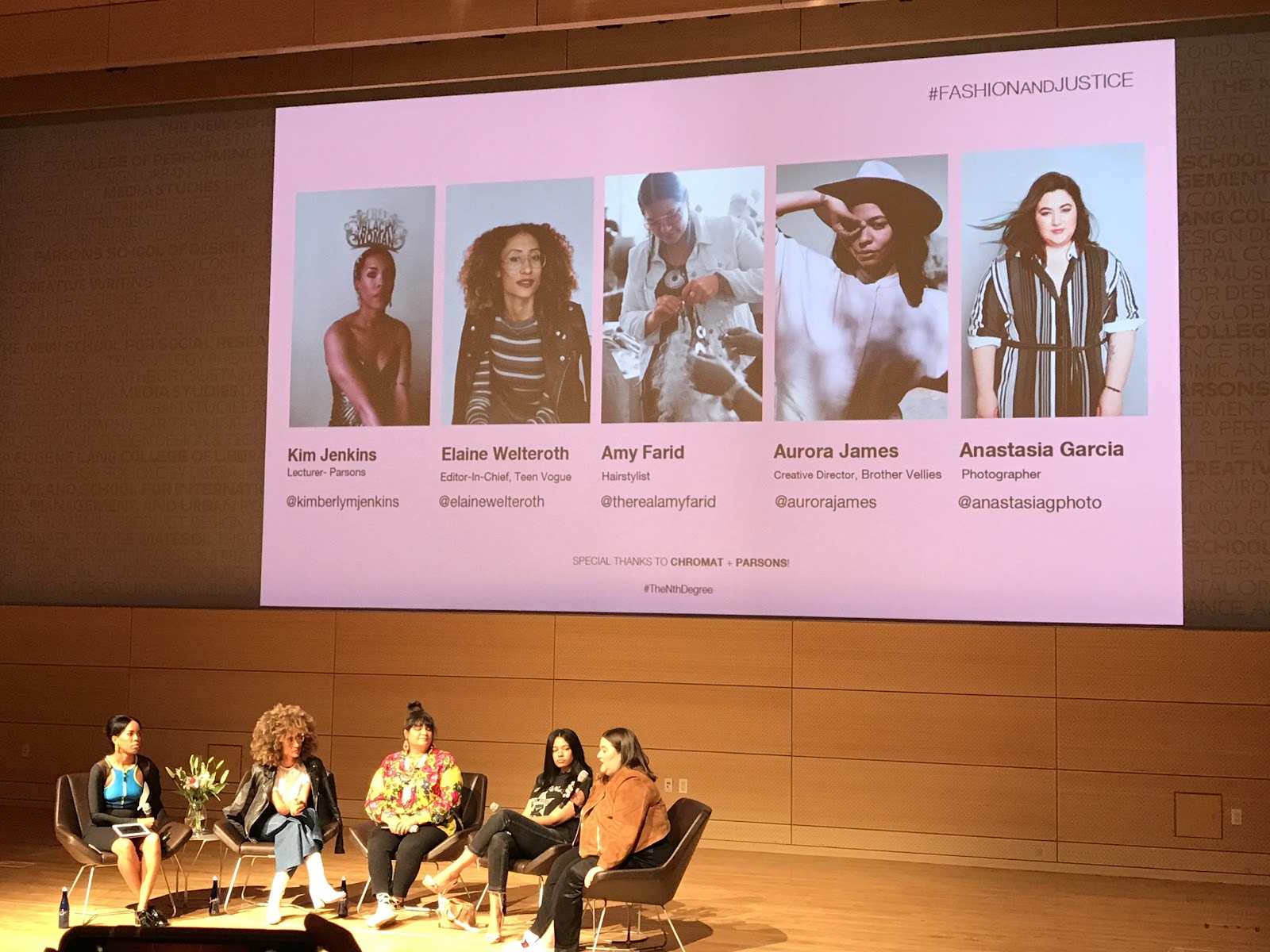 [IMAGE: From left to right: Kim Jenkins, Elaine Welteroth, Amy Farid, Aurora James, Anastasia Garcia. All sit in chairs on a wooden stage with a pink slide show behind them with photos and descriptions]

This event was a panel composed of fashion professor, Kim Jenkins as moderator; Elaine Welteroth, editor-in-chief of Teen Vogue; Amy Farid, hairstylist; Aurora James, founder and creative director of Brother Vellies; and Anastasia Garcia, photographer. Already, it was easy to see just how diverse this panel was, being made up of women of color of all different sizes and occupations. Each had a story about growing up as a minority and then creating artwork to influence societal changes.

Meeting these women was the highlight of my first New York Fashion Week. They all have so much influence and use their power to speak up not just for themselves, but for others. It was very enlightening to see what these women have done for the future of fashion as a more accepting space for all people. [IMAGE: People gathered on-stage around Elaine Welteroth, editor-in-chief of Teen Vogue, who crouches down and holds two peace signs. This image was taken from her Instagram story that I was proud to be featured in. I am in the back with blonde hair.]

Elaine Welteroth is well-known as being the youngest and the first black editor of Teen Vogue and it was incredible to see young black girls moved to tears as they saw themselves through her stories. Amy Farid is a Native American hairstylist that influenced a very well-known lingerie company to not run a shoot featuring a traditional war bonnet and tests the boundaries of gender through her hair work. Aurora James runs a sustainable shoe company, Brother Vellies, that is based in Africa and has highly ethical work practices. Anastasia Garcia is a hispanic plus-size woman that photographs women of all sizes, breaking the barriers of what fashionable women are supposed to be. Even Becca McCharen (who sponsored the event) stood to the side as an ally as the women commended her Chromat show that featured an extreme amount of diversity as that is what fashion shows should look like. 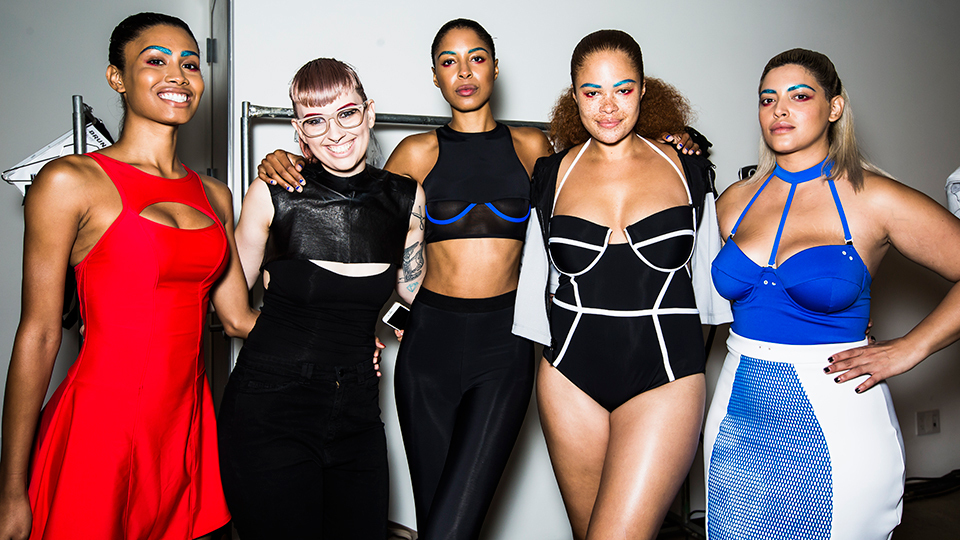 [IMAGE FROM STYLECASTER: Becca McCharen, founder of fashion line Chromat, backstage with 4 models at her show. The models are diverse featuring women of color in different sizes wearing her designs.]

These women are the future of fashion.

CHECK OUT THE PANEL RECORDED HERE

In a world where news is more constant than ever before and flies faster than ever before, knowing just where to look can be an extremely difficult decision. There’s CNN, the New York Times, the Washington Post, Fox News, the Huffington Post, BBC, Al Jazeera, ABC News, CBS News, MSNBC, Buzzfeed… you get the picture… After much review, the question arises: what is the right choice? For me, I think I’ve found it in Quartz. Quartz is an “online-native” news organization that reports on just about everything (which is what I love about it). Average, mainstream political news is always presented, but wackier stories from around the world tend to make it into the mix as well.

I primarily use the Quartz app, which has an interface very similar to the Apple Imessage layout, and is presented in “text-form”. Users click on buttons at the bottom of the screen to indicate interest or the lack thereof in certain stories, and the articles are sent in five to ten sentence snippets on the screen.

It’s super easy, often fun way to get the most pressing news, as well as more casual, light stories, each day. I’d highly recommend it for individuals who don’t have a lot of time to soak up text-heavy articles on the regular, and who are just looking for a smile every once in a while.

After a long summer of podcasts, the start of the new school year has very much reconnected me to the music world. My absolute favorite discovery has been K.Flay, an indie rocker currently on tour with Imagine Dragons. She’s just released an album, Every Where Is Some Where, that is full of tongue-in-cheek angry dancing songs. Blood in the Cut and High Enough are two singles and highlights from the album, and the High Enough music video is definitely a big mood for the fall. 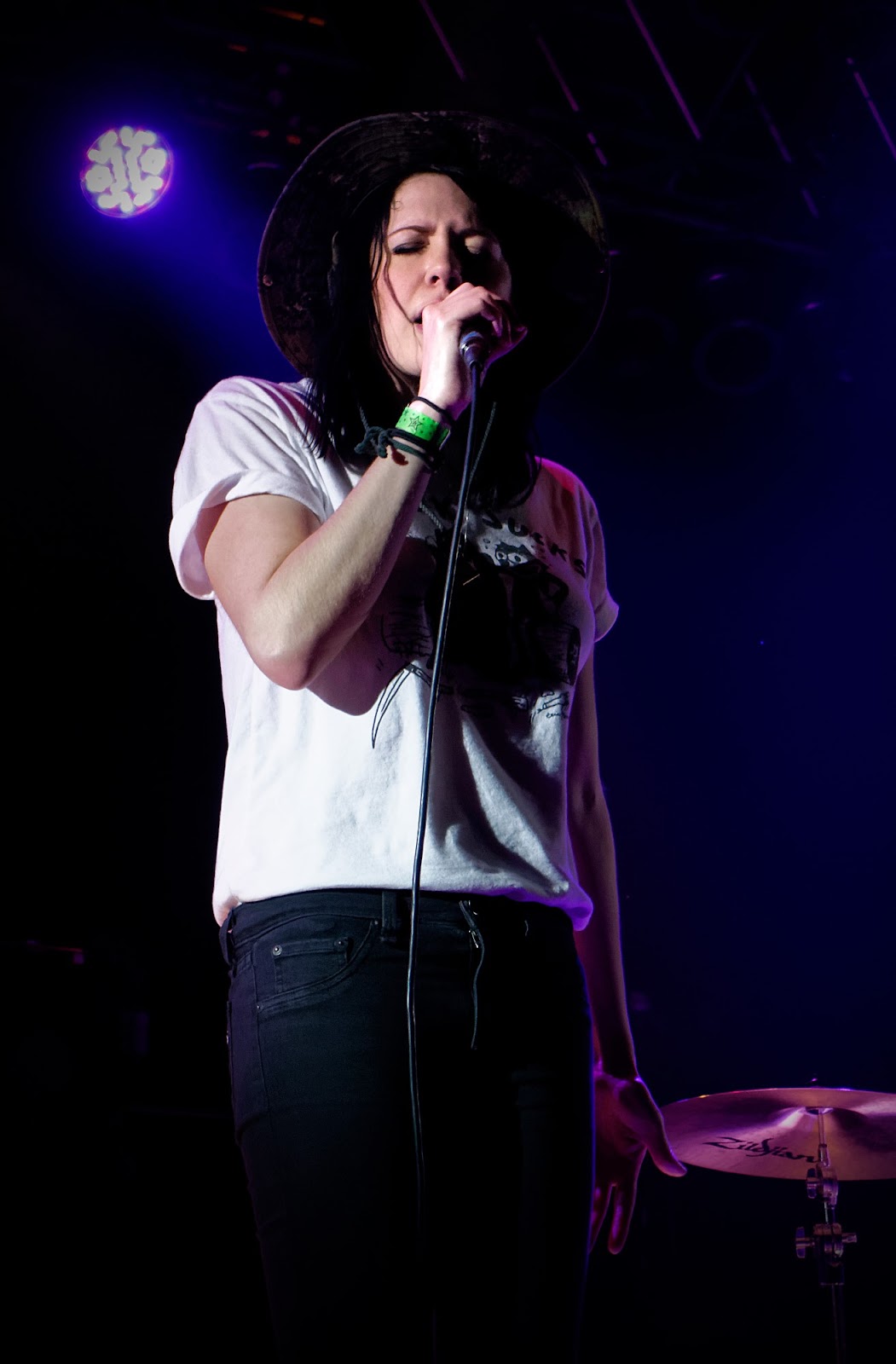 Haim, the fairly popular sister-band, is also killing the game right now with their new album Something To Tell You. It’s mostly soft rock/pop, and hasn’t received a ton of publicity past a Saturday Night Live performance, but it’s especially fitting for cozy fall days. They experiment a lot with voice and instrumental techniques, so if musically complex songs with simple lyrics are your jam, you’ll love them. Right Now and Nothing’s Wrong are highlights, and just today they released a new song not from the album entitled Valentine.
[IMAGE: Haim laying in the grass with closed eyes. From left to right: Alana, Este, and Danielle.] 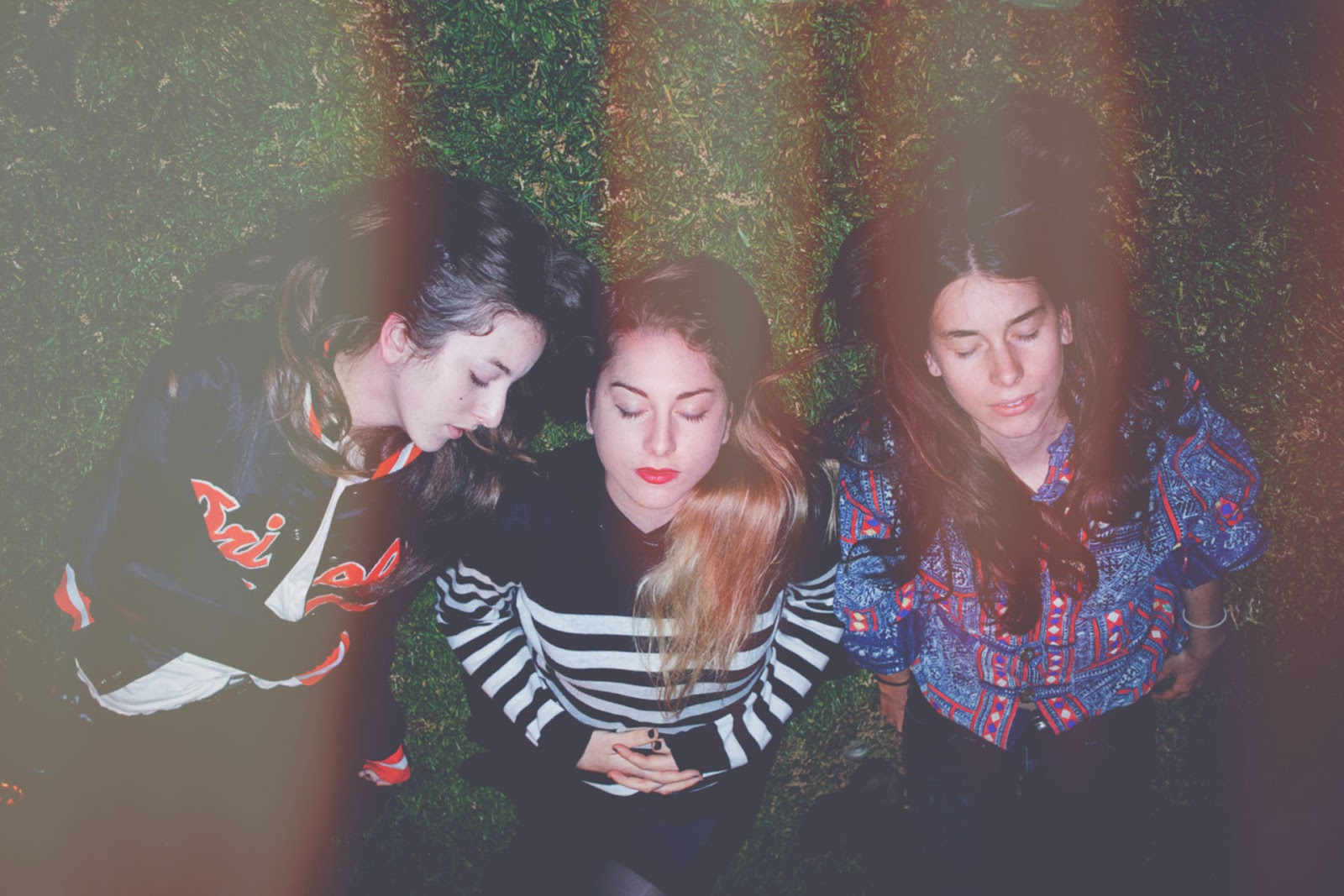 There are two bands I have been revisiting this past month that I’ve fallen in love with all over again: Walk The Moon, an American rock band who released their new single One Foot recently, and Fall Out Boy, who have released three new singles from their upcoming album, M A N I A (Young and Menance, Champion, The Last of the Real Ones).

Walk The Moon blew up with their song Shut Up and Dance, but I remember listening to their self-titled album before this and getting sucked into their up-beat, pop-rock beats and self-made music videos, such as that for Anna Sun. Although their music reminds me more of Summer, I’m enjoying dancing my way into Autumn with it.

Fall Out Boy have evolved their song a lot since they debuted: the techno elements of Young and Menance really got me hyped about their new album as their progression is so clear on that track, while they still maintain their pop-punk/punk-rock roots. The Last of the Real Ones is possibly my favourite new song right now, paying homage, in my opinion, to their Save Rock and Roll era. It’s going to remain a favourite for many months to come - or, until their album comes out in January and I can listen to all of it on repeat.

Earlier this month, I discovered the Tabloid Art History Twitter account while scrolling through my dashboard. I instantly fell in love. I love art as much as I love pop culture, so this account seemed like it was made for me. I like most of their tweets that come across my dashboard. This month, their exposure has also grown considerably, with features in Vogue and other major publications at the top of the list.

Tabloid Art History, if you haven’t already figured it out, compares moments in pop culture to famous works of art. It’s glorious. A few of my recent favorites include Carrie Fisher and Meryl Streep, Lucy Liu, and Lindsay Lohan. 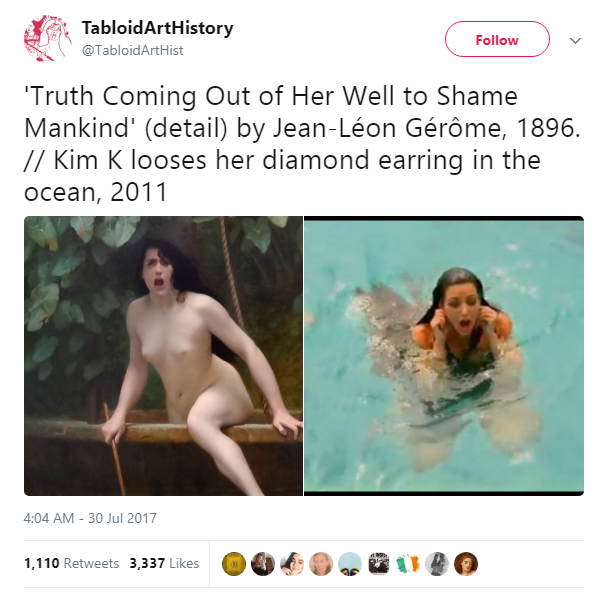 [image desc: a painting of a naked woman and a picture of Kim Kardashian in the ocean]
One prime example of Tabloid Art History’s wonderful comparisons.

My ultimate Risen Fave of September goes to Rihanna’s Beauty Line “Fenty Beauty”. The September Launch had the world shook.

The Fenty Beauty Collection is strongly complexion-focused. The collection includes: A soft matte base, a soft focus primer and a liquid foundation in an exceptional 40 shades. “The biggest challenge was making sure that each product covered all skin tones, and it was a challenge I was up for,” she told BAZAAR. “I didn’t care how long it took, I was going to make sure that we covered most skin tones. Diversity and inclusivity are important to the brand. I hope that fans, makeup lovers, and makeup artists feel that.”, She also dropped her gloss bomb universal lip luminizer (lip-gloss).

I especially relate to all the other fans who are extremely appreciative to Rhianna’s vision of accommodating many skin tones. It gives many people like me confidence and pride to be comfortable and love the skin you’re in.

MAC, Bobbi Brown, Revlon, CoverFX, and bareMinerals — black women still have relatively limited foundation options compared with the total number in the market. This makes Rihanna’s launch all the more important. Research firm Mintel reports that black women may “face challenges in finding shades that match their skin tones” and that only 37 percent of black females over the age of 18 say they use foundation, compared with 50 percent of white females.

Fenty Beauty has been utterly outstanding in uplifting women of colour and catering for their skin tones and it's cruelty-free which made all the vegans (including me) melt in adoration to the Princess of Pop.

Although Fenty Beauty has many lovers, they will always be haters. Rihanna had to clap back to a makeup brand called “Makeup Forever” when they posted a picture on Instagram exclaiming that they’ve always had foundation for many skin tones before Fenty Beauty launched. Their caption read: “40 shades is nothing new to us  Since 2015, the UltraHDFashion released 40 shades for everyone’s unique skin tone understanding the difference between red and yellow undertones.” The Queen of Clapping Back replied with a short “Lol still Ashy”.

Away from the drama and hate. At the end of the day, I hope the positive social-media attention that Fenty Beauty has received from black women sends a message to the rest of the beauty world to follow suit. It needs to give women of every skin tone the cosmetics they deserve — and create products everyone can be stoked about.