By Simone, Vivian, and Alexis
Women in Art History is a series highlighting female creators and artists that have not gotten the recognition they deserve. We share the lives and works of female artists who have gone mostly unnoticed by the general public. 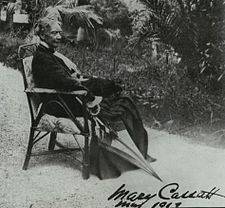 [Image description: Mary Cassatt in a chair with an umbrella]

Mary Cassatt was an influential Impressionist painter known for her intimate paintings of women and children. Born May 22, 1844, she was one of many American expatriates who lived and worked in France. Cassatt grew up in an environment that viewed travel as an essential part of education, so she spent much of her young life visiting European cities, studying languages, art, and music. At 15, Cassatt began studying at the Pennsylvania Academy of the Fine Arts. She studied from 1861 to 1865, when, frustrated with the patronizing attitudes of her male peers and teachers and the lack of opportunities given to female students, she decided to study on her own and moved to Paris in 1866. 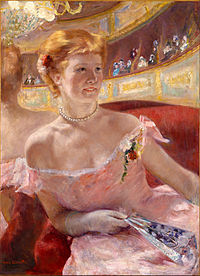 Woman with a Pearl Necklace in a Loge
[Image description: A woman wearing a pink dress and a pearl necklace looking into the distance]

While Cassatt studied under well-regarded painters, Paris’ art scene was undergoing drastic change with the formation of the Impressionists. Cassatt continued to paint in a traditional style, and so found little success, finally returning to the United States in 1870. She nearly gave up painting, until she was commissioned as a copyist in Parma, Italy, and returned to Europe in 1871. The Parma art community welcomed Cassatt with open arms, and when she had finished her job as a copyist, she traveled to Madrid, Seville, and then again to Paris where she opened a studio and continued to critique the traditional taste of the Paris Salon. She noticed that works done by women were treated with disdain unless they had a man to vouch for them. During this time, Cassatt changed her style and subject to try to attract commissions, to no avail. 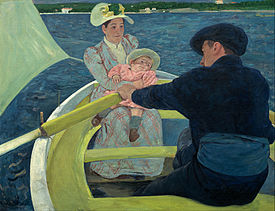 The Boating Party
[Image description: A woman holding a child and a man boating]

Finally, although she was at a low point, Edgar Degas invited her to show her works with the Impressionists, who held independent exhibitions. Impressionists were a loosely united group with no formal manifesto, but they tended toward open-air painting and vibrant colors applied in loose, visible brushstrokes, creating an impression of an image rather than a hyper-realistic painting. Cassatt accepted Degas’ invitation enthusiastically and began creating works to show at the Impressionist exhibit of 1879. She was a member of the Impressionist circle until they disbanded. 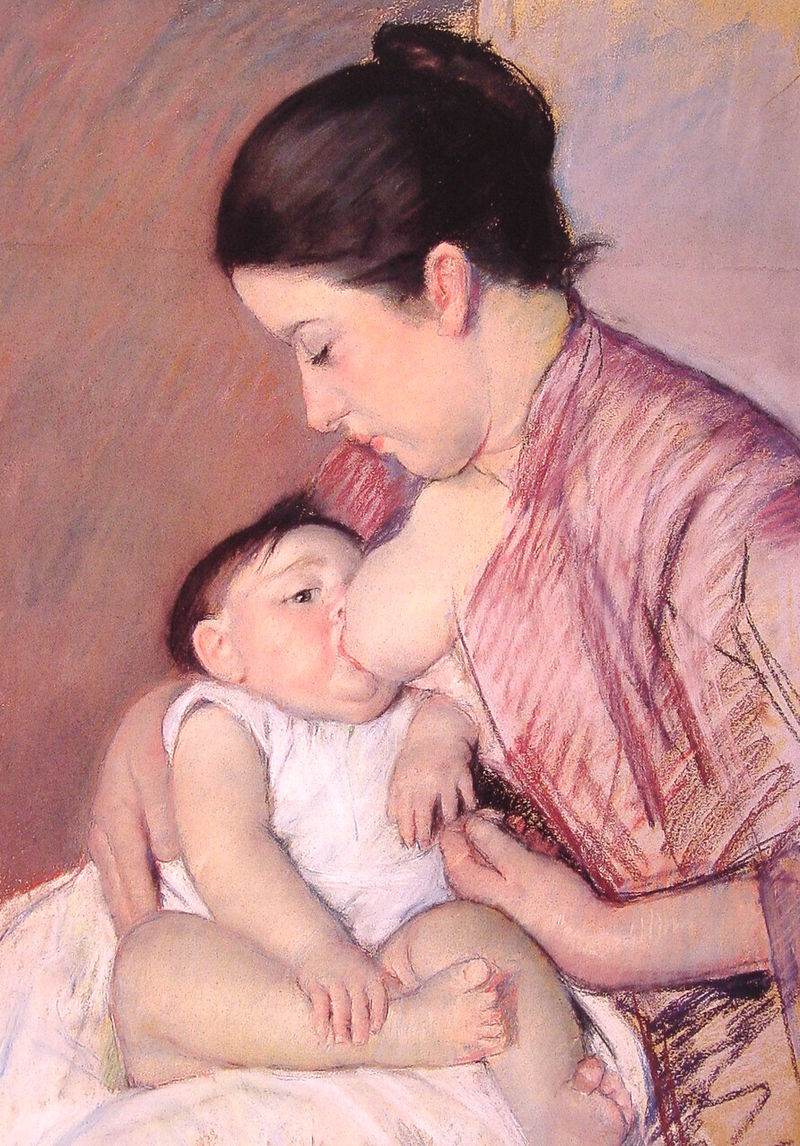 From the 1890s on Cassatt focused almost entirely on paintings of mothers and children and became a mentor to many American artists. Cassatt was a feminist all her life and showed works in an exhibition supporting the women’s suffrage movement in 1915. This exhibition was boycotted by not only Philadelphia society, but by Cassatt’s own sister-in-law. In response, Cassatt, who had almost gone blind, responded by selling many of her paintings. Mary Cassatt died near Paris in on June 14 1926, but her legacy lives on in her paintings, as well as stamps, songs, and even the SS Mary Cassatt, a World War II cargo ship. 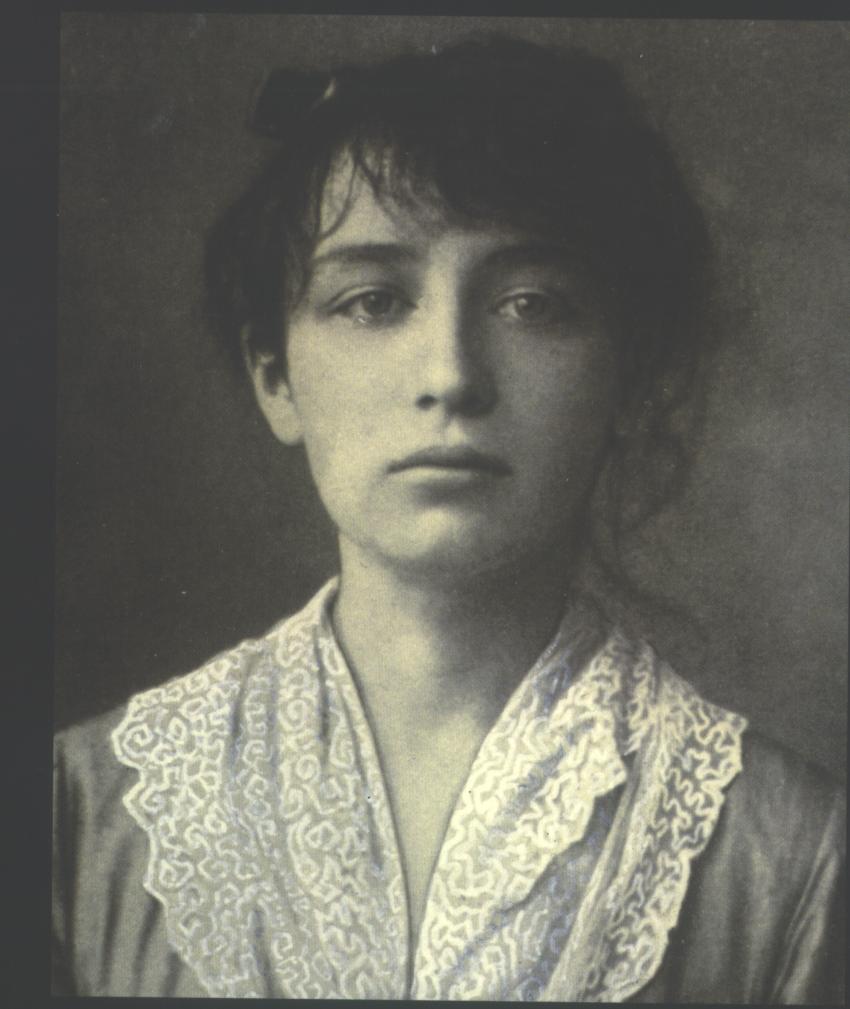 Claudel was a talented sculptor known for small-scale sculptures and her ability to convey stories through bronze and marble. Although Claudel exhibited genius and potential throughout her youth, her career ended in turmoil and seclusion. 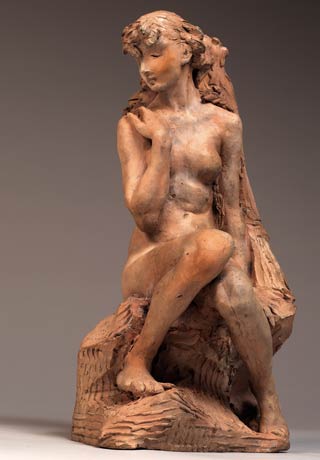 Young Girl With a Sheaf
[Image description: nude sculpture in terracotta. A young girl sits against a sheaf of wheat. Her pose is innocent and modest, with legs crossed, an arm raised towards her shoulder, and gazing towards the left.]

Despite having been born in northern France, much of her life centered in Paris, where she studied sculpture at the Académie Colarossi. After graduating, she shared a studio with Alfred Boucher and later Auguste Rodin. It was during her time at the Académie Colarossi where she produced her first notable works, alongside her friend and fellow sculptor Jessie Lipscombe. Her work was a part of the Symbolism movement occurring in the 1860s, which sought to represent emotions and ideas through art. Intense emotion is displayed through her art, notably in The Mature Age, which expresses her agitation over the end of her relationship with Rodin. 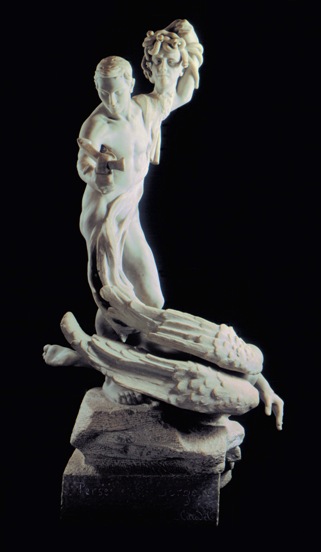 Perseus and the Gorgon
[Image description: sculpture in white marble. Depiction of the hero Perseus having slain the gorgon Medusa. The gorgon’s wings and body are at the hero’s feet. He holds Medusa’s decapitated head, writhing with snakes, twisted above him, and a broken mirror in the other hand.]

In 1903, she began exhibiting her works at salons, noticeably at the Salon des Artistes français and the Salon d'Automne. However, in 1905, she started exhibiting signs of what some diagnosed as schizophrenia. She created her last sculpture in this year- Perseus and the Gorgon, a depiction of the Greek myth, showing Perseus with Medusa’s head in his hands. From then on, because of her mental state and her sadness at having been rejected, she destroyed most of her sculptures. 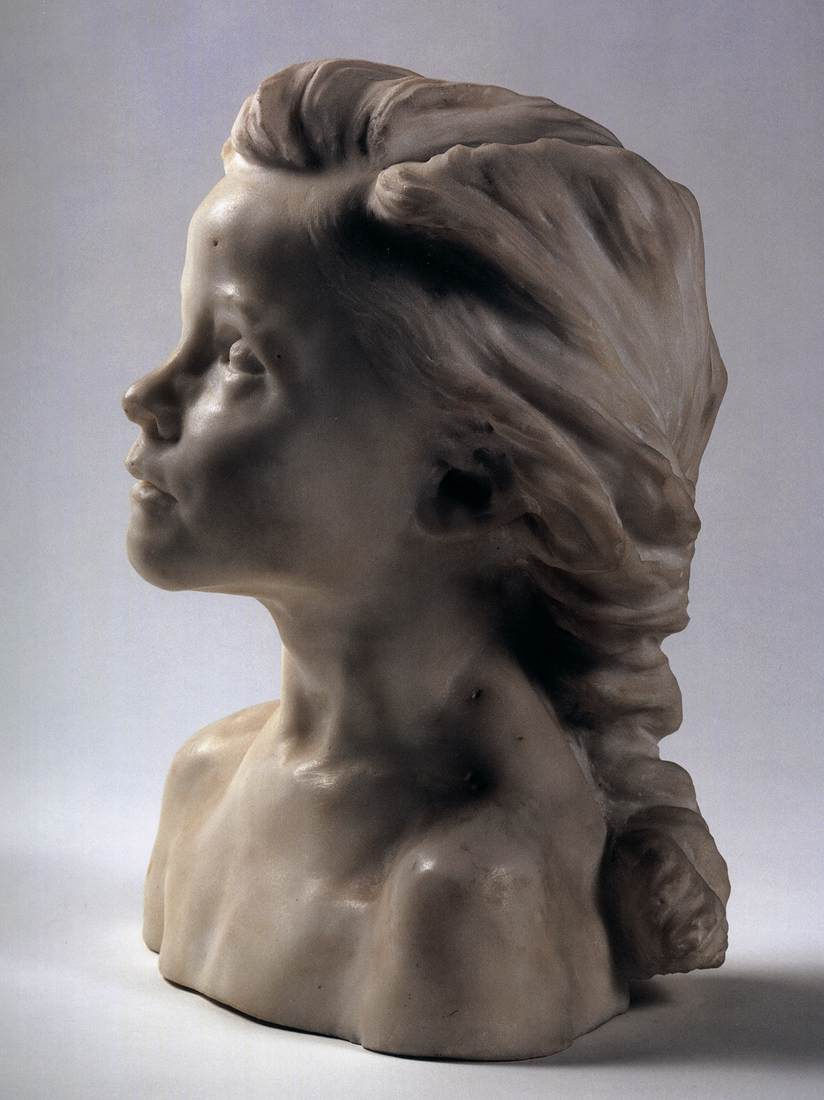 After the death of her father, the only family member who supported her career, in 1913, Claudel was involuntarily admitted to the psychiatric hospital of Ville-Évrard in eastern Paris. There she spent the rest of her life. She died at the age of 78 in 1943. Her final resting place was in a communal cemetery in Montdevergues, Vaucluse, though a plaque had been dedicated to her in Villeneuve, where she had lived as a child. 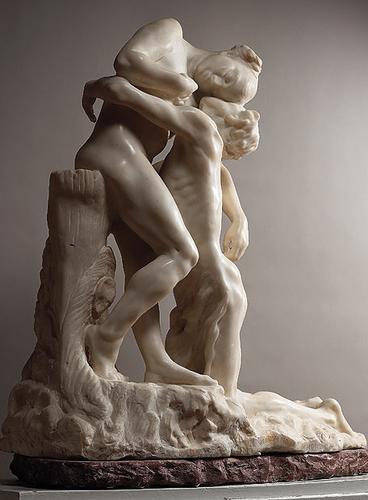 Vertumno y pomona
[Image description: nude sculpture of two lovers embracing in white marble. A girl sits on a tree stump while her lover, on his knees, reaches up to embrace her.]
Originally Sakountala, this sculpture was inspired by an Indian play of the same name.

Claudel was a talented sculptor, though overshadowed by her mentors and overlooked by those who did not appreciate her distinct style. Recognition of her work came after her death, and her ninety surviving works are shown in the Musee d’Orsay, Musée Rodin, and the Camille Claudel Museum in Nogent-sur-Seine.

*Alexis originally did a write-up on her in the series’ last edition, but I decided to also do a take on Claudel. 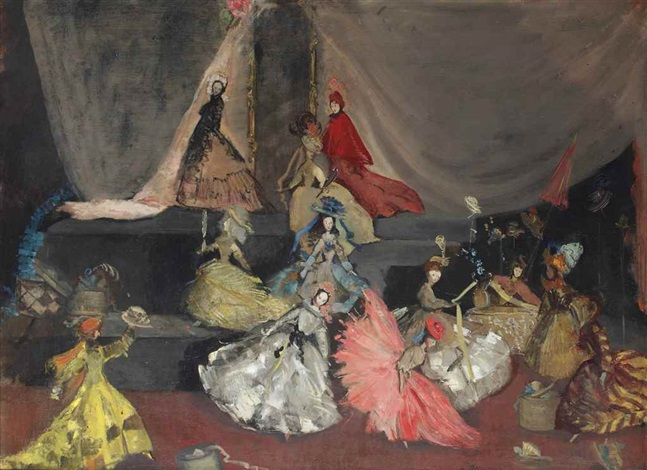 Lizzy Ansingh was a female artist, writer, and illustrator born in the Dutch city of Utrecht. On March 13th, 1875, Edzard Willem Ansingh and Clara Theresia Schwartze welcomed Lizzy into the world. Lizzy’s mother, aunt, and grandfather were all painters themselves. Due to her family’s devotion to religion, many of her earliest paintings and drawings featured angels and other theological themes. Ansingh’s aunt, Thérèse Schwartze, was a major influence on her art. In the sixteen years Lizzy spent with her aunt, she received many of her first drawing lessons and met many important painters of the time, including George Hendrik Breitner and Simon Maris. 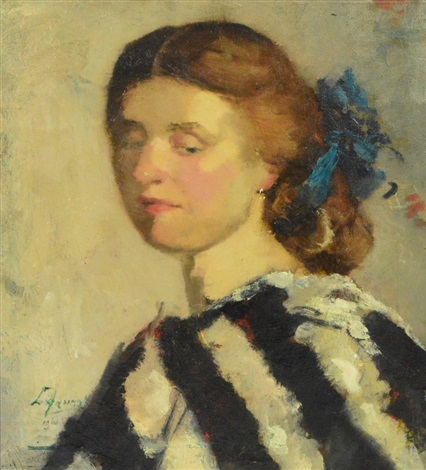 When Ansingh was only nineteen, she enrolled in the Amsterdam Royal Academy for the Visual Arts. It was during this brief, three-year stint at the Academy that she studied Greek and Roman statues to learn anatomy. She also grew close to several other female painters during this time. After she left the Academy, Marie van Regteren Altena, Suze Bisschop-Robertson, Coba Ritsema, Ans van den Berg, Jacoba Surie, Nelly Bodenheim, Betsy Westendorp-Osieck and Jo Bauer-Stumpff joined her in forming a school of painters that would later be known as the Amsterdamse Joffers. These women would go on to inspire many generations of painters. 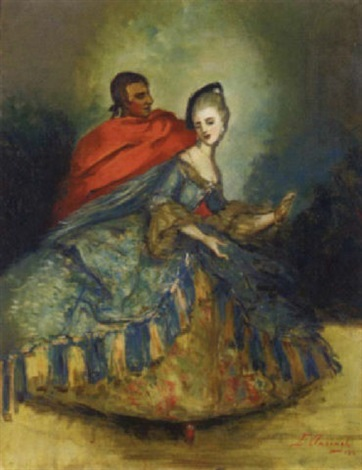 Januari: Dancing Dolls, 1934
[Image description: two dolls are posed as if they are dancing together.]

However, the Amsterdamse Joffers is not made Lizzy Ansingh famous. It was more the other way around. The talent of all of the painters brought their group fame. Ansingh gained fame for her portraits and paintings of dolls. She painted many small portraits, still lifes, and paintings of dolls reenacting scenes or conveying messages. Ansingh’s most famous portrait was one of her mother, one of the first she painted. She painted it in 1899 and it had a great reception when it was first shown in public in 1900. Her paintings of dolls were greatly inspired by her aunt and often bore moral undertones. For example, one of her most famous doll paintings depicted the seven deadly sins. When her aunt passed away, Ansingh painted ‘The Funeral’ in her honor. 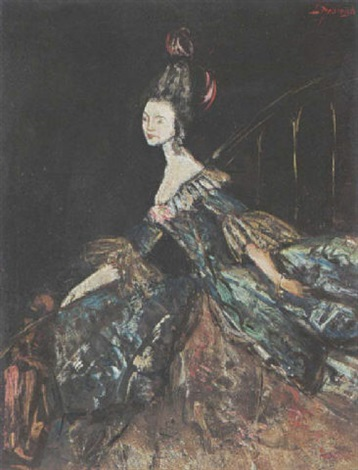 An Elegant Doll, year unknown
[Image description: a doll with large hair wearing a gown poses in a curtsy.]

In addition to her painting, Ansingh also intermittently worked as an illustrator, primarily for children’s novels. Her poetry was published in the literary magazine ‘Maatstaf’ in the mid-1950s, and, near the end of her life, she also published two children’s books. On December 14th, 1959, Ansingh passed away. 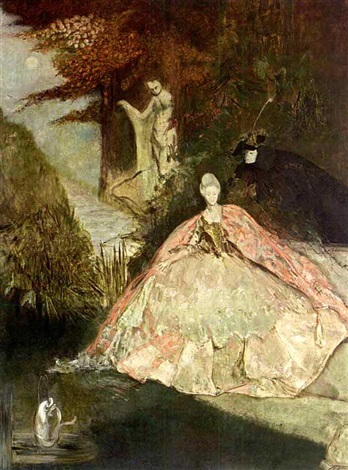 The Phantom of the Opera, year unknown


[Image description: a woman in a large gown poses by a lake while the phantom of the opera stands behind her.]