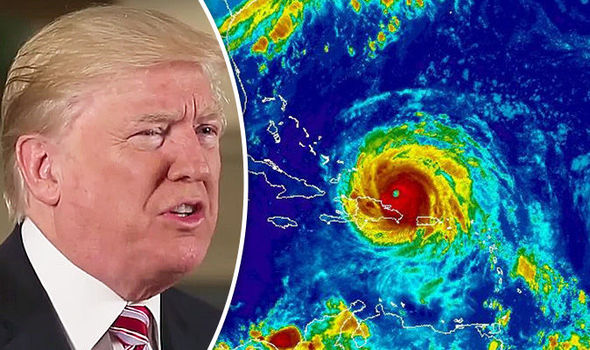 Donald Trump’s frustrating responses to major events are nothing new; politicians and civilians from both sides of the political spectrum have expressed exasperation at his ill-informed remarks since the beginning of his political career. As far as current events go, however, Trump’s comments regarding recent natural disasters have been nothing short of disheartening.
Natural disasters like the recent hurricanes can be massively devastating, but many have argued that they have given Trump leverage to unify Americans rather than divide the population as he has in the recent past. However, he still has not seized this opportunity. Prior to Hurricane Harvey making landfall on the Gulf Coast of Texas on August 25, Trump responded to reporter’s requests for a message to Texans by saying, “Good luck to everybody.” Hurricane Harvey brought record rainfall and deadly storm surges, so by presidential standards, Trump’s response was careless and disappointing- a letdown to those affected by the results of the natural disaster.
In an article from the Huffington Post,  columnist Michelangelo Signorile states that “...[Donald Trump] sent out tweets as if he was watching a great show about the ‘HISTORIC’ storm, and seeming to thank the people of Houston for it ― while thousands were stranded and needing help.” Trump also referred to Hurricane Harvey as a “very expensive situation,” and went to Camp David as the Category 4 hurricane made landfall rather than joining other White House personnel in planning the aid process. He also initially refused to accept essential relief aid from the Mexican government, which also provided disaster relief and necessary resources during Hurricane Katrina.
Further concerning is his lack of a rapid response to Hurricane Irma, as well as both of the massive earthquakes that occurred in neighboring Mexico last week. Trump did extend condolences to the Mexican people, but this was three days following the most recent earthquake. Blaming his failure to respond in a timely manner on “poor cell reception,” Trump defended himself when questioned about his outreach to Mexico’s president. Following Hurricane Irma making landfall, Trump stated that Americans got “a little bit lucky” that Irma strayed from its predicted path. This insulting remark failed to recognize the devastating effects and death toll in Florida and Puerto Rico.
Many Americans voiced concern over Trump’s appointment of Scott Pruitt as Administrator of the Environmental Protection Agency, especially due to his long history as a climate change skeptic and an adversary of the EPA(Environmental Protection Agency). These concerns were magnified as Trump denied any correlation between climate change and the recent natural disasters plaguing North America, saying that the world has seen “much bigger storms.”
As a whole, the Trump administration’s comments on recent natural disasters have been ill-informed and insensitive, further exacerbating the unease of people under his presidency. His removal from modern science and refusal to acknowledge the existence of climate issues will likely cause further problems in the future.

If you would like to donate to victims of Hurricane Irma, Hurricane Harvey, or the Mexico earthquake relief efforts, links to reputable charities are listed below.