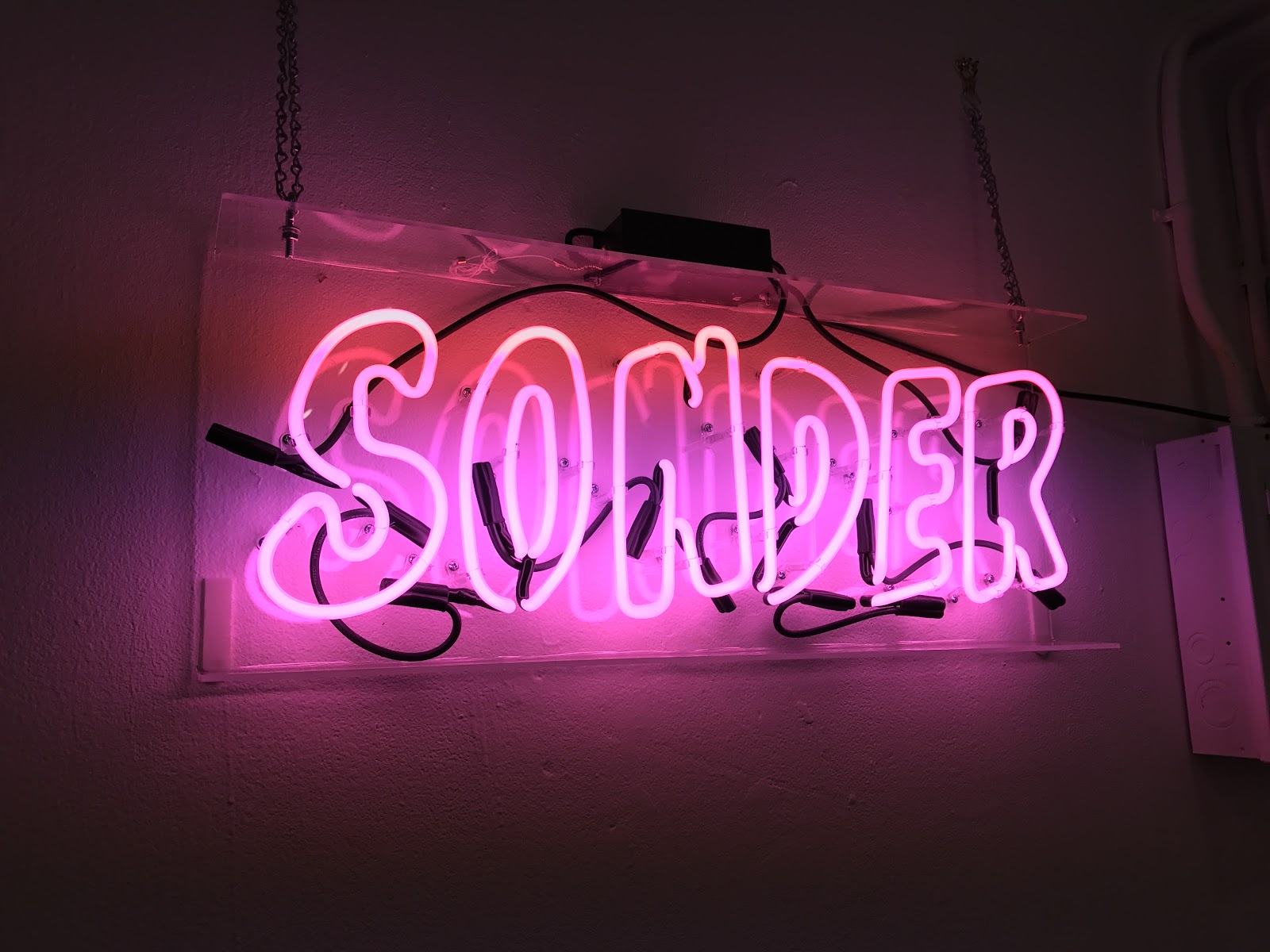 
On September 4th, 2017, two teens debuted an exhibition at the Brooklyn Fireproof. Stepping inside, attendees are greeted with bright pink lights shining through the exhibition room, stands with flowers and disposable cameras, and a table run by the curator’s mom with wine and grapes. Just one more turn and the pink light brings youth to the space and every face inside lights up with wonder; the neon reads “Sonder.”


I was invited to interview the wonderful curators, Emma Orland (16) and Carolyn Hallock (19). 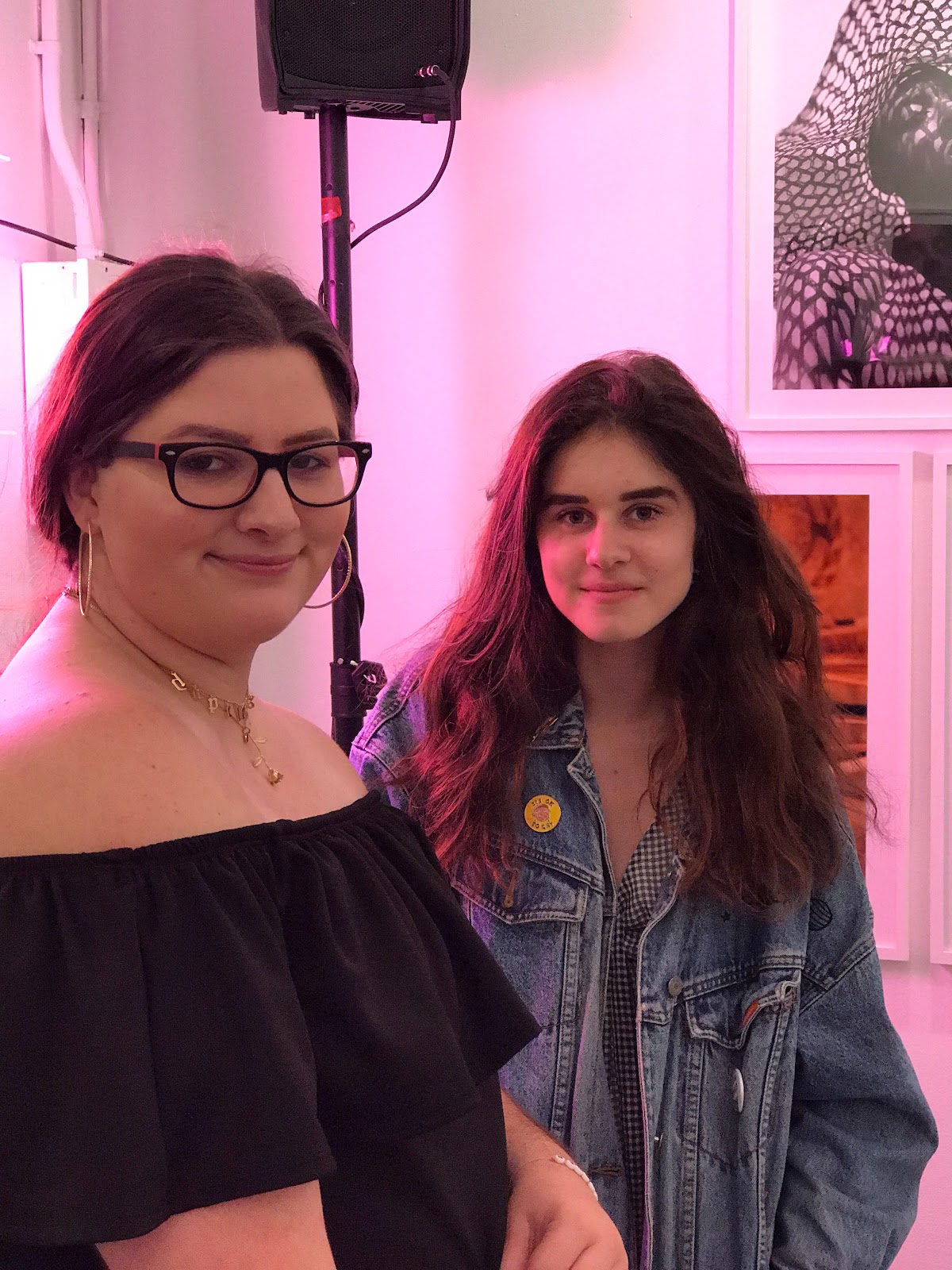 CHARIS: What inspired you to create this exhibit? What was the source for your drive and determination?
EMMA: Initially, at first, I had always known art exhibits existed, but Brittany Natale’s Teen Dream exhibit was my inspiration because she was the first person to feature my work in something.


Wow, what was that piece?


EMMA: I had two pieces; they were both about flipping the gender and sexualities with Disney and fairytale sort of things.


CAROLYN: Yeah, it was really cool.


EMMA: And then I was really upset that I was doing nothing with my life and so I texted Carolyn and was like “Hey, we should do this.”


Wow, that’s really admirable. How do you think this exhibit can help young artists?


CAROLYN: A lot of times, young artists don’t get in because of their age. There was no minimum age required for this exhibition. There wasn’t necessarily a maximum age either, but we mainly accepted younger artists. 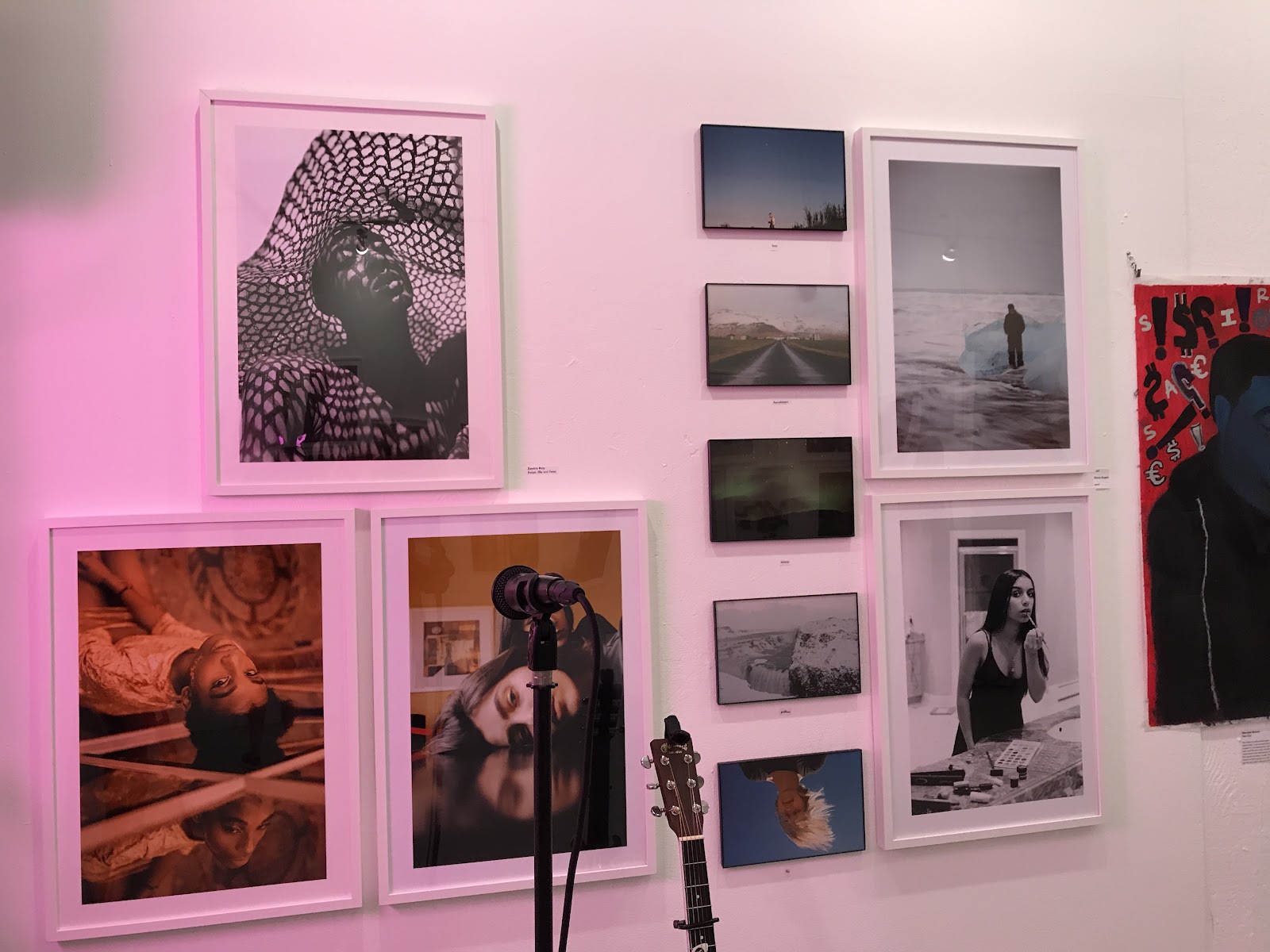 [IMAGE: Framed artwork in the exhibition room, basking in a pink glow]


What was the process of gathering and choosing artists for this exhibition? How did you end up planning all of this?


EMMA: So we went on Twitter and were like “Are there any artists out there that would possibly be interested in being in a show?” and a bunch of people responded, and then we got really obnoxious and kept tweeting out.


CAROLYN: We probably tweeted out like 6 times a day.


What do you hope to achieve next? Do you have any end goals?(i.e. careers, future exhibits, etc.)


EMMA: We were thinking about doing it in March with springtime and stuff. 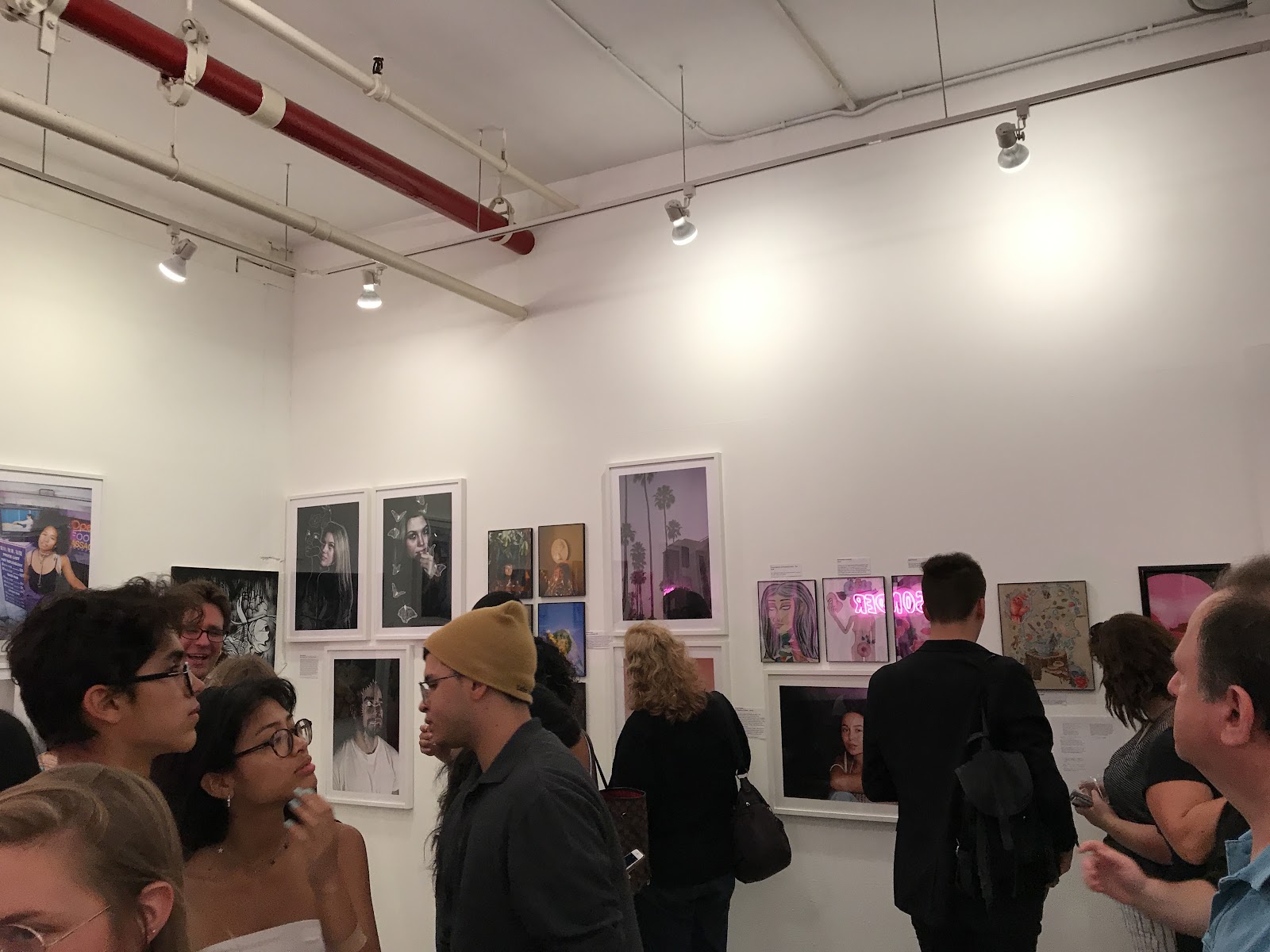 [IMAGE: Thoughtful attendees stand in a room, admiring the artwork on the walls]


Do you hope to do anything with a different theme?


EMMA: Well, we don’t really have a theme this time so maybe we’ll go into themes, but I feel like it’s sort of limiting.


Because it’s more about opening voices rather than restricting them, right?


What does “sonder” mean to you? Why did you go with that name?


EMMA: So we were kind of stumped for a name and we kind of just went online.


CAROLYN: I’m pretty sure we just looked up “interesting words” or something like that.


EMMA: Which is like a stupid thing to do, but you know.


It does look cool though! You got a great name out of it!


CAROLYN: Yeah it was definitely worth it!


EMMA: And the meaning of “sonder” is actually “the realization that everyone around you has a mind as vivid and complex as your own”. We felt that it kind of represented what we wanted to expose. 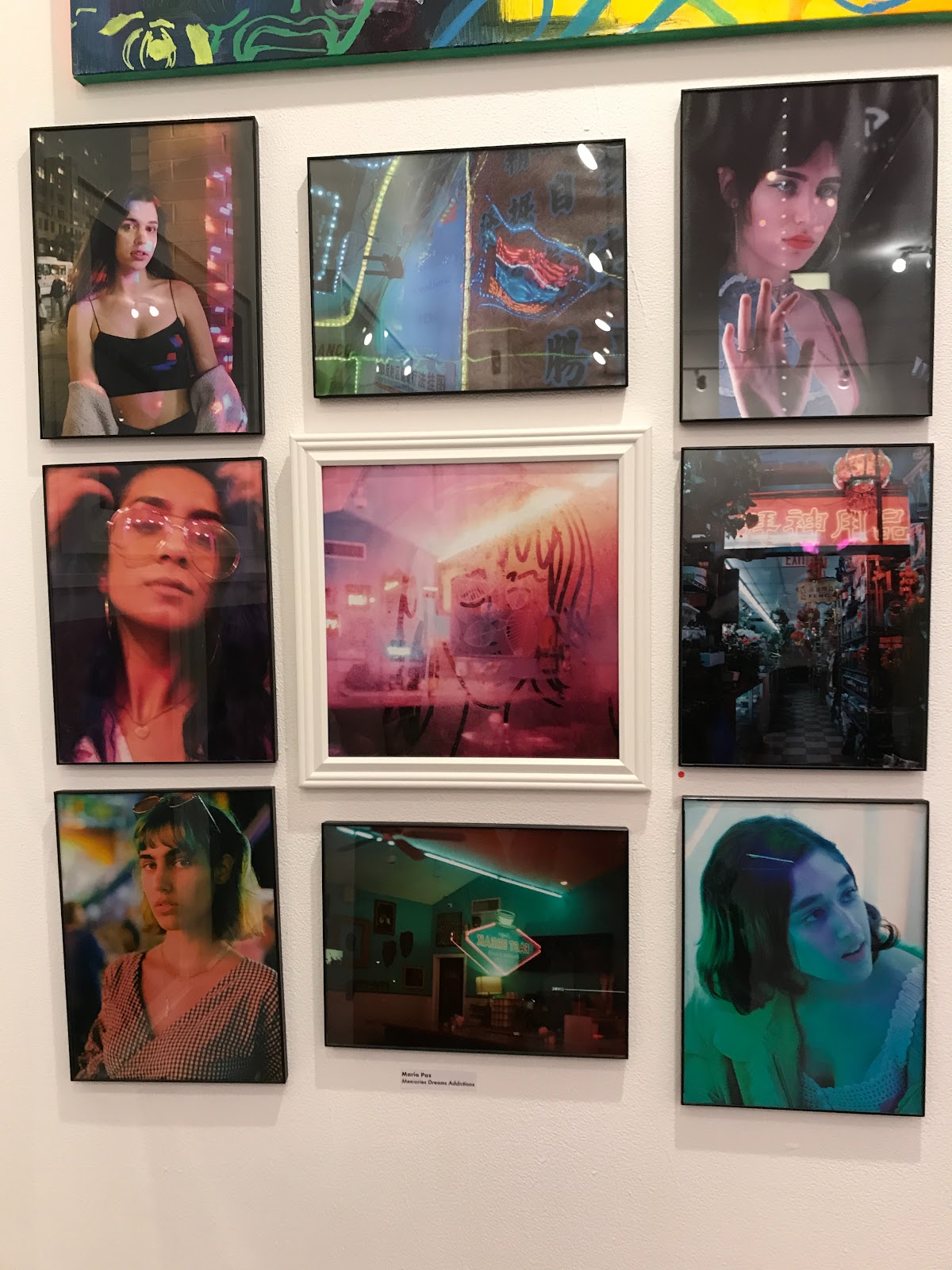 
Yeah, like each artist has a mind of their own and they each have a vision that they want to bring to the table.


EMMA: Yeah, I feel like a lot of times, young artists and young people in general are seen as not too smart, like not educated yet.


A lot of times people are put down because they’re younger and [adults] will say things like “Oh, you’re too young. You know nothing about politics, art, your sexuality, etc.”


EMMA: Right, so we wanted to prove that wrong. We felt that this word sort of represented that if that makes any sense. 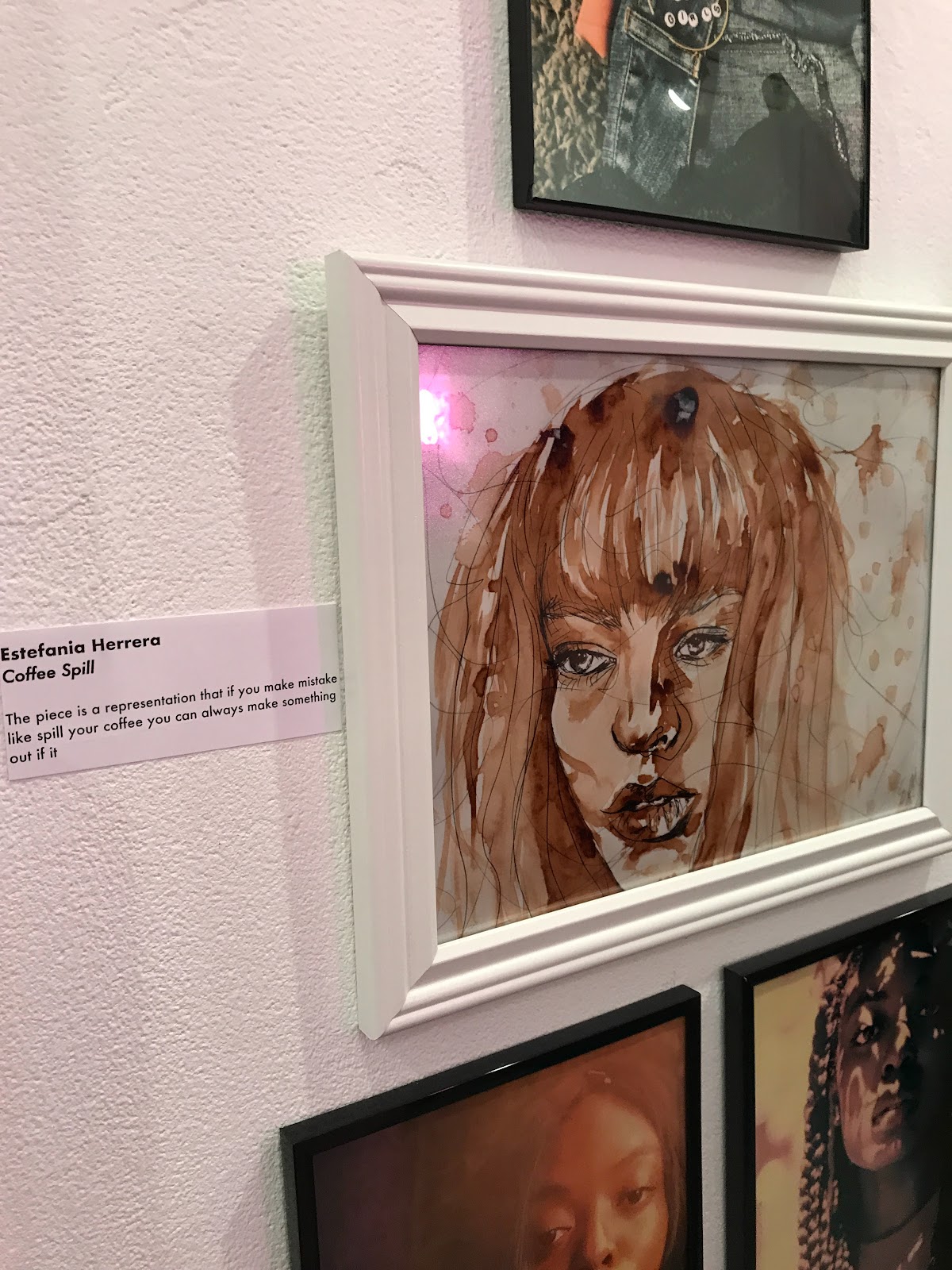 [IMAGE: Artwork on the wall from Estefania Herrera titled “Coffee Spill”. The artist statement reads “The piece is a representation that if you make a mistake like spill your coffee, you can always make something out of it.”]


Do you have anything that you want to say to any young artists or any young people that want to get into the creative careers?


EMMA: Definitely, [I would say] don’t stop pushing. Don’t let older people put you down because of your age. Don’t let them take away from the quality of your work by focusing on your age. I feel like that’s really important.


CAROLYN: That’s one of the reasons that we didn’t put the ages of the artists on their artist statements; because, people would be like “Oh, this is good for a seventeen year old” so age just like isn’t a factor over the quality of their work. 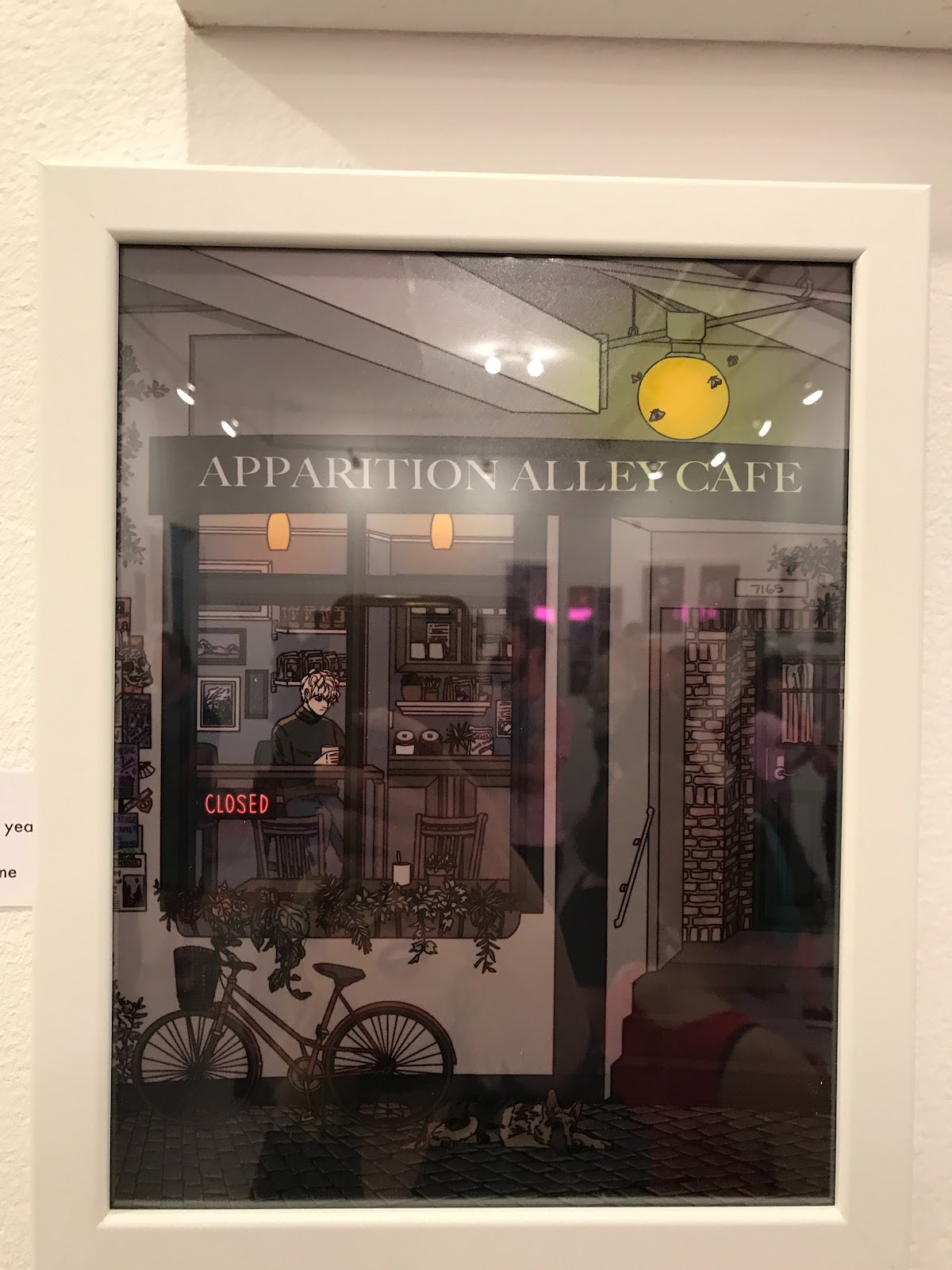 
This interview was transcribed from voice/ video recordings. The curators were wonderful and good-hearted. It was incredible to have such a great conversation with them filled with laughs and me constantly saying how cool and admirable they were (I took out many of those instances).


I look forward to where we see them next! Future coverage to continue at the next exhibition.
art art show charis charis huling current events interview