What a Leader Really Memes 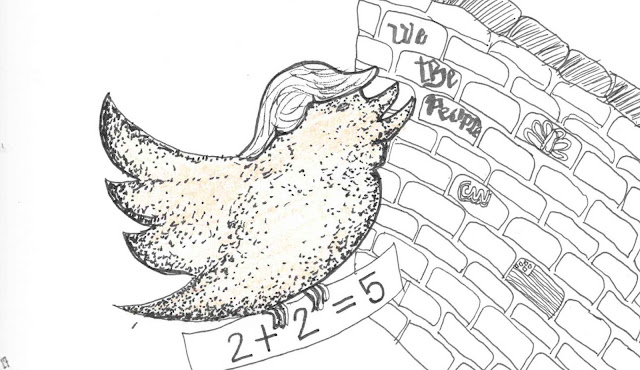 Article and art by Charis Huling

A little birdie once told me that the president is always right. Chances are, if you’re one of the 328 million monthly users on Twitter, you’ve heard it too. This bird goes by the name of @realDonaldTrump and he has accumulated a following of over 33.4 million at the time of writing.

Twitter is known for both memes and rapid access to the news. When a political leader is tweeting a meme attacking the news, something is off. On July 2nd 2017, Donald Trump tweeted a video (of dubious origin) that depicts himself as a WWE fighter body slamming a man with the CNN logo placed on his head. This was captioned with “#FraudNewsCNN #FNN”. 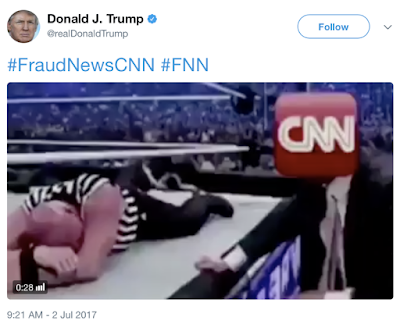 [IMAGE: Tweet from @realDonaldTrump on July 2nd, 2017 reading “#FraudNewsCNN #FNN” followed by a screencap of a video with a wrestling ring, a referee on the floor of the ring, and a man in a suit with his hand on the ring and the CNN logo placed over his head.]

For a tweet with over 350,000 retweets and a hefty supply of replies of praise, this post is far from simply being another meme to laugh at. Everything has intention; some motive compels people to carry out their actions, regardless of whether they are aware of it or not. The subtext behind this tweet is that Trump is trying to subvert the media and will do all he can to shut news channels down. He doesn’t address issues himself; instead, he is attacking the sources and thinking it’s humorous to do so. He is consciously trying to implicate journalism for his quandaries and using Twitter as a machination to curate a media outlet that won’t question his actions.

Sarah Huckabee Sanders, Trump’s press secretary, has stated that “If the media can’t be trusted to report the news, then that’s a dangerous place for America.” However, Trump is the one creating these unstable conditions for the country as any source that doesn’t agree with him is deemed “fake news”. Even during election season, Trump has explicitly tweeted that “Any negative polls are fake news.”

Sarah Sanders was seen trying to dismiss the news outlets in her entanglement with a reporter at a press briefing on June 27th, where she wanted them to leave the “Russia hoax” alone. Yet, during Hillary’s campaign, Trump repeatedly used her email scandal against her, even when evidence of any treasonous intentions was hardly found. The CIA found substantial evidence of Russian involvement in the 2016 election, but instead, Trump tweets about “Fake News” when he is well aware (and tries to justify) that his own son, Don Jr., was involved with a Russian lawyer. When he is called out for his lies, he tries to subdue the situation through this tactic. Trump believes that the media is trying to silence him, when in fact, he is the one trying to silence the media, and has been doing so since the beginning of his campaign. With just his words, Trump is able to destabilize the country and create chaos as professionalism is foregone in favor of attacks that send ripples through the American foundation of the First Amendment. 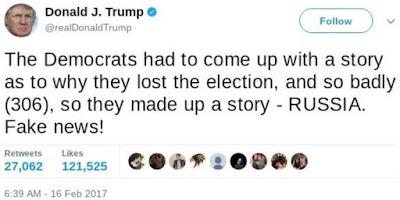 [IMAGE: Tweet from @realDonaldTrump on February 16th, 2017 reading “The Democrats had to come up with a story as to why they lost the election, and so badly (306), so they made up a story - RUSSIA. Fake news!”] 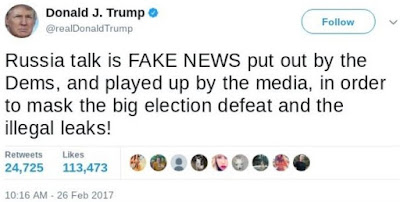 [IMAGE: Tweet from @realDonaldTrump on February 26th, 2017 reading “Russia talk is FAKE NEWS put out by the Dems, and played up by the media, in order to mask the big election defeat and the illegal leaks!”]

A tweet made on July 16th, 2017 perfectly sums up the intentions of the president to distract from his own wrongdoings with calls to attention of the transgressions of others and attacks on journalistic integrity:

[IMAGE: A tweet from @realDonaldTrump on July 16th, 2017 reading “HillaryClinton can illegally get the questions to the Debate & delete 33,000 emails but my son Don is being scorned by the Fake News Media?”]

When the truth is brought to light by the media outlets he’s tried to silence, his only defense mechanism is to point to what “most politicians” would have done. If what the media was saying was so “fake”, then there would be no need for these excuses. 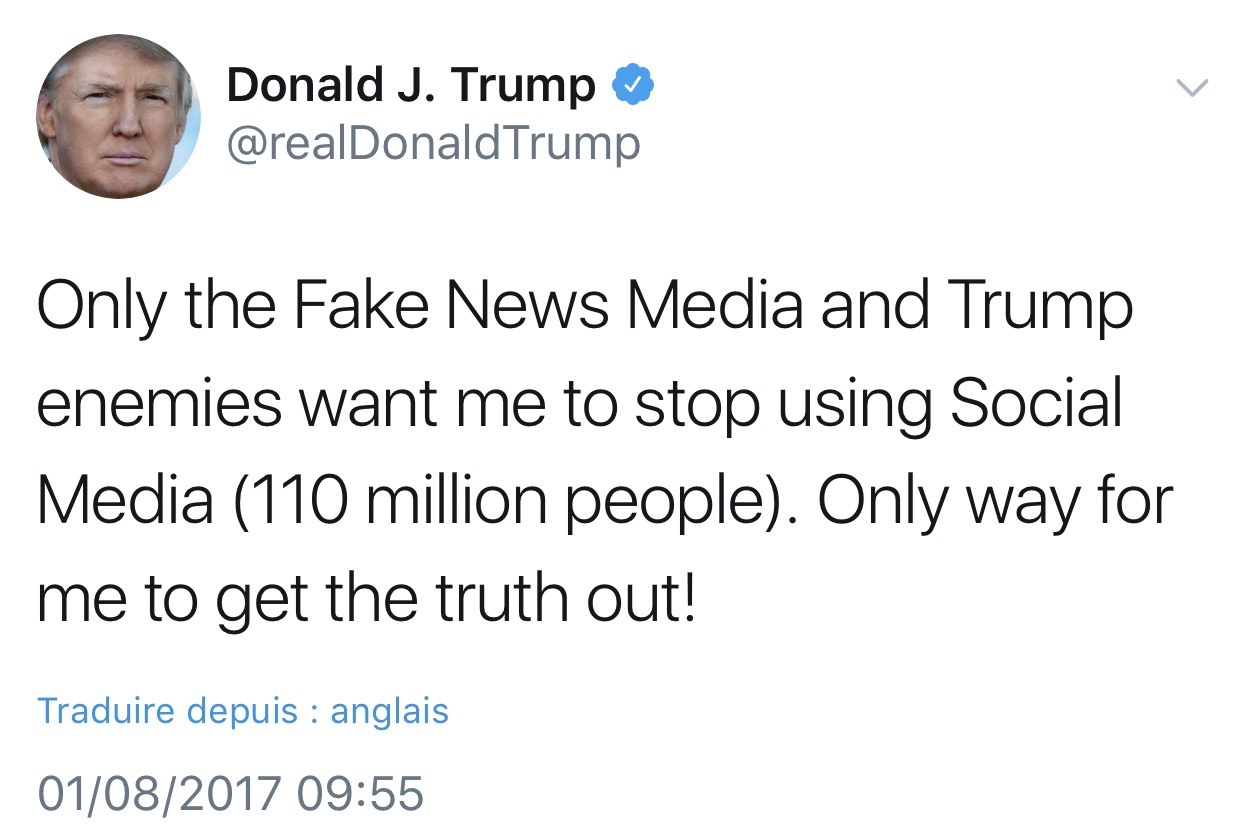 [IMAGE: A tweet from @realDonaldTrump on August 1st, 2017 reading “Only the Fake News Media and Trump enemies want me to stop using social media (110 million people). Only way for me to get the truth out!”

Constitution.org says that “The emergence of tyranny…begins with challenges to a group” and “develops into general feelings of insecurity and inadequacy.” Democracy is about the right of the people to challenge the government when they feel something is awry. Even the Declaration of Independence states that “A prince, whose character is thus marked by every act which may define a tyrant, is unfit to be ruler of a free people.” By Trump’s tweets, it’s easy to see that he feels threatened by the media’s challenges to him. The news was “fake” for researching a collusion with Russia even though it was true, according to this leader of the so-called “free world”. George Orwell’s 1949 political satire 1984 describes freedom as “the freedom to say that two plus two make four. If that is granted, all else follows.” When the media can’t criticize a leader for allegations that are true without an attempted delegitimization, something doesn’t quite add up.
Trump’s supporters, especially on Twitter, have been taught not to believe the media– only the words he says are true. This portion of America is being deceived into trusting only the media outlet that Trump himself has crafted. Meme after meme, arguments against these supporters are only met with reaching discreditation of where the sources came from. Trump’s top strategist, Steve Bannon, has even declared the media as “the opposition party” and that it should “keep its mouth shut.” Meaningful debates are hard to come by as a result of this lack of trust and instead, American citizens are descending into a state of entropy. 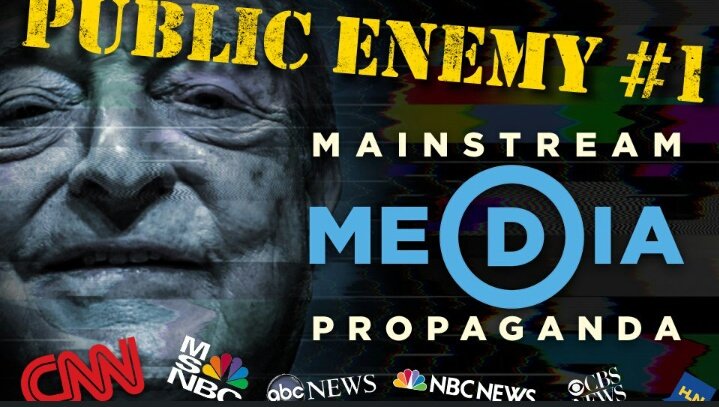 [Image taken from pro-Trump Twitter: A horizontally rectangular image with the face of Rupert Murdoch, the chairman of Fox News, enlarged and in the left of the frame. It has been darkened and desaturated then overlaid with a blue tint and slight television lines, evoking an almost eerie mood. To the right of his face, text reads “MAINSTREAM MEDIA PROPAGANDA”. Tilted like a large stamp in a font similar to that on a prisoner photo, text reads “PUBLIC ENEMY #1” in worn down yellow. The bottom of the frame has a horizontal line of popular news station logos: CNN, MSNBC, ABC NEWS, NBC NEWS, CBS NEWS, & HLN”.]

A good person is someone that can own up to the mistakes they make, not someone who attacks others for correcting them. Lacking any possession of ethos in his claims, Trump feels threatened by his own absence of legitimacy. A credible person would address rather than attack; they would protect people’s rights to criticize rather than derail them. How are we expected to have a democracy when a president is trying to shut our voices out?

@realDonaldTrump, the media isn’t the enemy, you are.