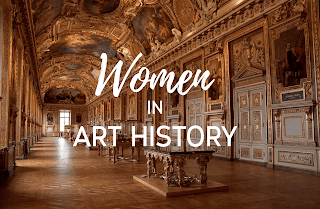 image via Travel Innate
[image description: the hall of a museum with Women in Art History written over it in white text]
Article by: Alexis Daigle

TRIGGER WARNING: This article has non-graphic mentions of rape and graphic depictions of gore in it (under Artemisia Gentileschi) 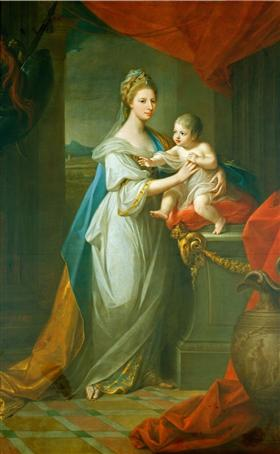 image via WikiArt
[Image Description: A blonde woman in a white dress holding an infant in a lavish room.]
Portrait of Augusta of Hanover with her first born son, Karl Georg of Brunswick, 1767

Born October 30th, 1741 to painter Johann Joseph Kauffmann and singer Cleophea Lutz, Angelica Kauffman was an all-around talented child. Baptised as Anna Maria Angelica Catharina Kauffman, she learned to speak German, Italian, French and English fluently at a young age. She became well known for both her artistic abilities and voice in her early teens. At the same point in time that most children are first learning algebra, Kauffman was painting portraits for the rich and noble of countries such as Austria and Italy.
Due to her mother’s early death, Kauffman chose painting over singing as a profession. As a young adult, she travelled all over Europe, learning new painting techniques and making invaluable contacts. While first known for her etchings, or small recreations of famous paintings, Kauffman’s dream was to be a history painter. History painting is a genre of art that was dedicated to depicting famous historical events. It was also a genre almost entirely dominated by men. While she faced a fair amount of ridicule and adversity from men, she succeeded in her goals and became one of the most well known female painters (and one of the most well known painters regardless of gender) in Europe, and had a long list of clients, including tsars, kings, emperors, and intellectual elites. Angelica painted many historical scenes from literature, including Greek literature. Many of her paintings feature women as the subjects and are painted in a style that appears delicate and emotional. These paintings help kickstart the Sensibility movement, a style of art that romanticizes the human soul. 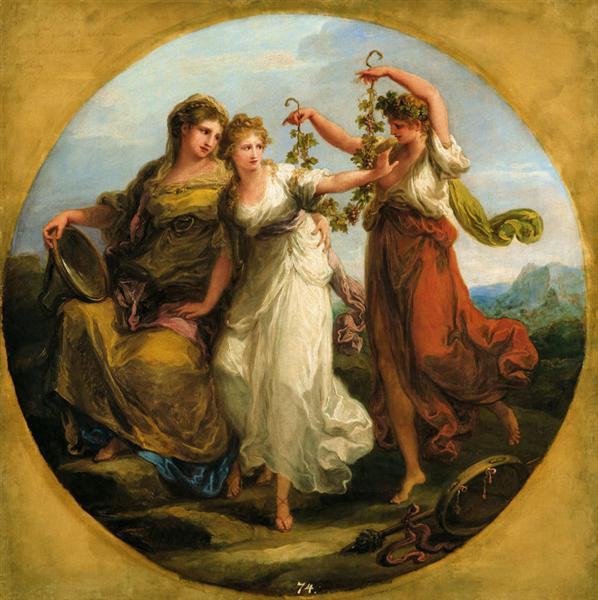 image via WikiArt
[Three blonde women wearing dresses. The woman on the right is holding a long vine with both hands.]
Beauty, Supported By Prudence, Scorns The Offering Of Folly, 1780

At just 21, she was elected into the Bologna Art Academy. Soon after, she joined the academies of Florence, Rome, and Venice. Six years later, Kauffman became one of the founding members of the Royal Academy in London. She becomes one of two women to serve as members in the first 200 years of the academy. After her death in Rome, she left behind nearly 1000 works of art. Her funeral is widely considered the grandest funeral since Raphael’s. Her coffin was carried through the streets by her friends in the Royal Academy and followed by a massive procession. A bust of her was placed inside the Pantheon next to Raphael’s. 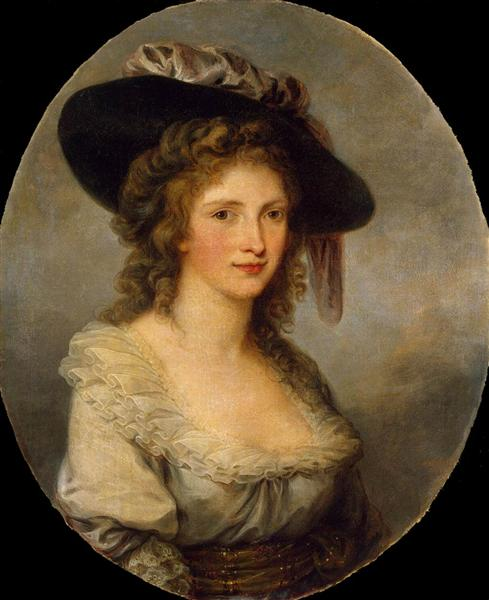 image via WikiArt
[A woman with curly brown hair in a white dress with a black hat.]
Self-Portrait, 1785

Angelica Kauffman was a groundbreaking female artist at a time when women were barely regarded as anything more than possessions, and her work and success in life opened up painting for women in ways unimaginable before her. 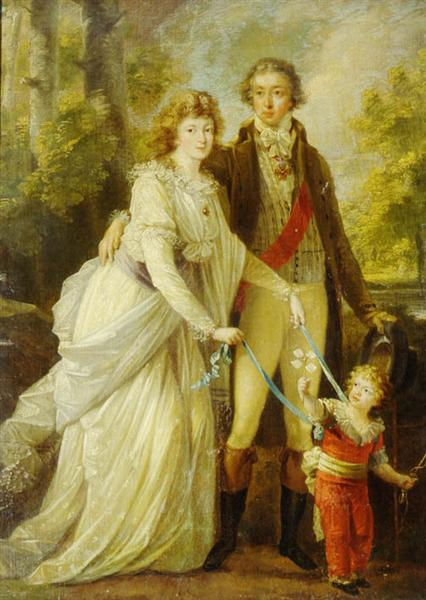 image via WikiArt
[A woman uses a child leash from the 18th century to keep her son in line while her husband looks on.]
Count Nikolai Tolstoy With His Wife Anna Ivanovna And Their Son Alexander, 1795 image via Veni Vidi Vici
[A woman holds an infant while three men gather round.]
Adoration of the Magi, date unknown

Born July 8th 1593, Artemisia Gentileschi was another influential female artist. Like Kauffman’s mother, Gentileschi’s mother also died from a young age, prompting her father to want to teach her how to paint. Despite being denied internships, her father finally found someone to teach her. Agostini Tasso, an artist her father painted frescos with, offered to help teach Gentlieschi perspective when she was 18. However, during these lessons, Tasso raped her. When her father found out, he had him charged. While the charges eventually stuck, the case ruined Gentileschi’s reputation. She was married to a family friend barely a month after the trial ended, but she left him shortly after. Her paintings around the same time reflect her rage. Her paintings are known for their technical superiority and unique portrayal of the subjects.

image via Pinterest
[A woman wearing a strategically-placed sheet sits on a cloud.]
Allegory of Inclination, 1615

Gentileschi moved all over Europe with her daughters, seeking patronage from nobility to finance her works so she could raise her daughters, both of whom grew up to be artists, too. Gentileschi’s entire life was marked with pain and struggling, but she still managed to make a name from herself and raise two daughters on her own in a time where nothing like that had ever been considered possible. 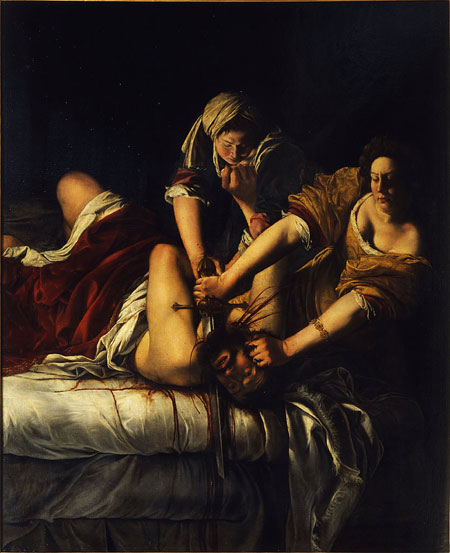 image via Khan Academy
[Two women hold down a man on a bed while one stabs him.]
Judith Slaying Holofernes, 1614-20 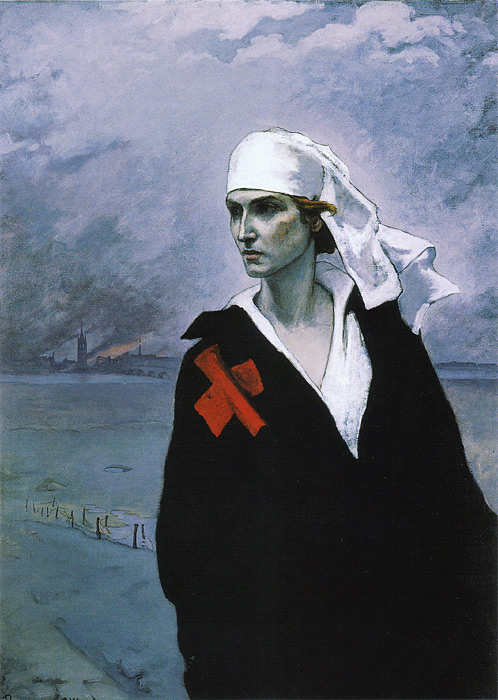 image via Wikipedia
[A woman in a dark coat with a red cross on the shoulder stands in a winter scene.]
The Cross of France, 1914

Romaine Brooks, born Beatrice Romaine Goddard, was an early twentieth century painter, graphic artist, and writer known mostly for her portraits. As a child, Brooks’s father abandoned her and her family. A few years later, her mother left her in New York City with a laundress, only to appear when Brooks was 12 to take her to Italy. After Brooks left Italy, she left her family behind until her older brother died. Soon after, her mother followed, leaving her without family but with incredible wealth. In 1902, Brooks married John Ellingham Brooks, a relationship that did not work out because both parties were homosexual. 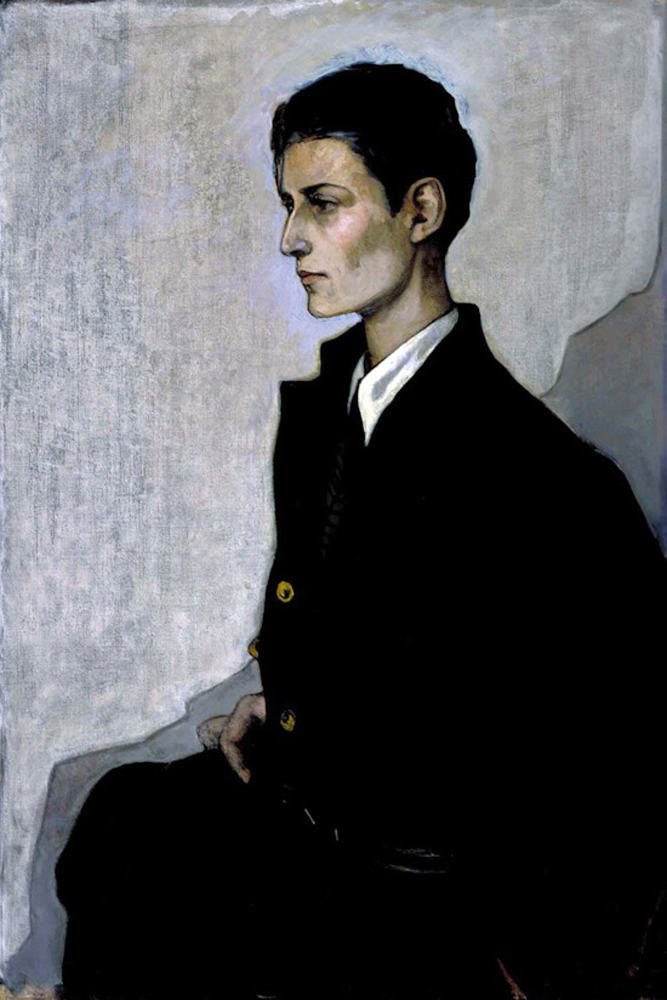 Three years later, Brooks moved to Paris and opened a studio, where she became increasingly interested in Princess Edmond de Polignac and her large collection of artistic friends. While in Paris, Brooks met an Italian fascist and fellow artist, Gabriele d’Annunzio, whose views on art and politics shaped Brooks’s for years to come. The first half of 1910 was filled with art and travelling for Brooks, who moved around Europe and developed her style. Her paintings from this time on all featured muted, grey palettes and subjects looking introspective. When World War I began, Brooks and her lover immediately returned to France from their vacation to help in the war efforts. These efforts earned Brooks a Legion of Honor. 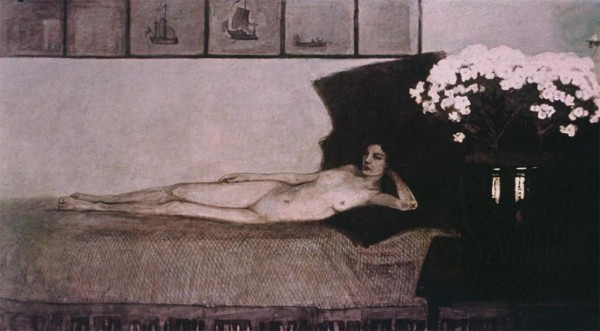 image via Pinterest
[A naked woman lies on a bed next to white azaleas.]
Azalées Blanches (White Azaleas), 1910

After the war, Brooks and her lover, Russian-Jewish performance artist Ida Rubenstein, ended things. Shortly after, Brooks entered into a 49 year long open marriage with Natalie Clifford Barney and Elisabeth de Gramont. The three of them lived separately and each took on lovers, but considered themselves to be in a loving marriage all the same. In the 1920s and 1930s, Brooks painted mostly portraits in the same grey, introspective style she had used in previous years, in addition to working on her memoir, entitled No Pleasant Memories. When Brooks was in her 60’s, World War II broke out. She and one of her lovers fled to Florence, where Brooks’s relationship to fascism was revealed in her art. After the war ended, Brooks spent most of her time trying to rediscover herself, but this period was mostly full of reclusion. image via Art History Project
[A woman in a shawl stands by the ocean.]
At the Seaside - Self Portrait, 1914