Orlando One Year On: Spoken Word and Reflections

A year ago on this day, June 12th, the largest mass shooting in US history took place in the Pulse Nightclub on its Latin Night. At this gay club, 49 LGBT+ people died and 53 were injured, the majority of whom were people of colour, specifically Latinx. The youngest was just 18. At the time, as a queer person, I felt an immense sense of loss and dread. It wasn’t because this act of terrorism was unexpected - queerphobia, as most queer people know, is alive and well, and in a sad way it didn’t shock me. But it left me feeling empty, gutted. I can only imagine how these feelings must have been amplified amongst QPOC. Not only did news outlets refuse to see it as a hate crime, but the media also whitewashed the victims.

I attended a vigil held in London - not the official one, which attracted thousands, but a smaller one hosted by queer Latinx individuals. It felt intimate and cathartic. People of different religions paid their respects similar how they would at funerals. Several QPOC spoke, equal-parts aggrieved and empowering in what they said. The event  ended with a song sung in Spanish. My Latino friend who accompanied me started crying as he listened to it. I lit one candle from me, and one candle from my girlfriend in Sweden. 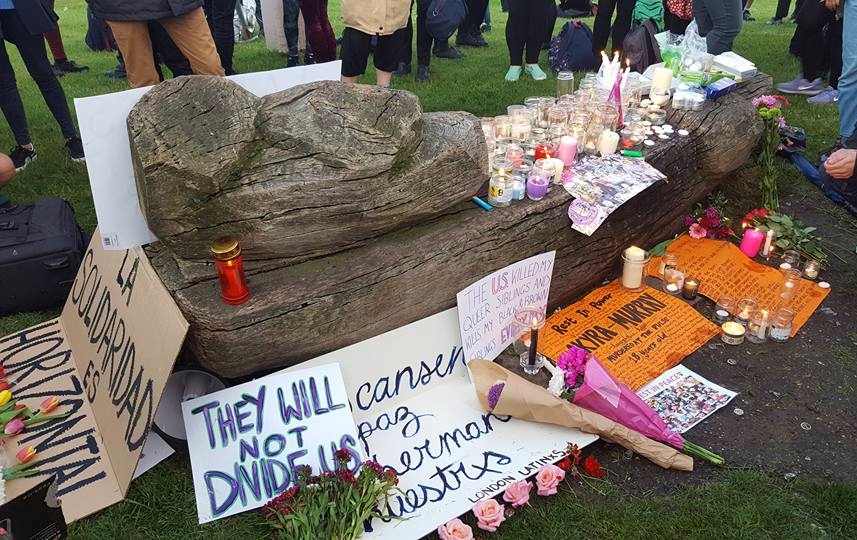 [Image description: A log in a park surrounded by signs in English and Spanish, e.g. “THEY WILL NOT DIVIDE US”. There are candles packed tightly and lit on top of the log and around it and flowers laid on the ground. The legs of people crowded around the log are visible.]
I wrote the following poem (transcript available at the bottom) a year ago in the wake of this horror as a way of processing what happened at Pulse. I hope I never have to write something from that place again - sadly, though, until America pays its debts to the queer community, especially the QPOC community, which it has berated, discriminated and killed, I’m not holding my breath.

Please follow this link for a list of ways to help and donate. Orlando's effect is still being felt.