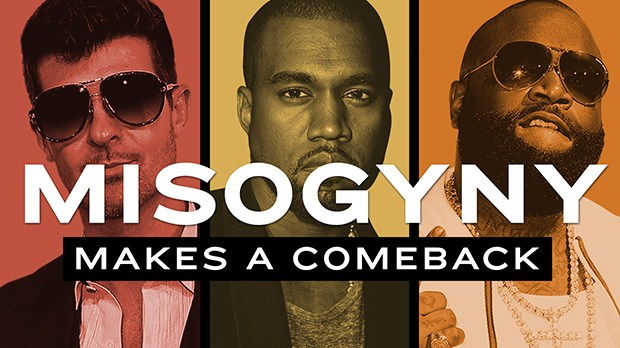 Image from: Misogyny In Rap
Image Description: Side by side pictures of Robin Thicke, Kanye West, and Rick Ross. “Misogyny Makes A Comeback” written in bold letters over their faces
Article By: Tyler Taylor

It’s no secret that today’s rap music is rampant with misogyny, homophobia, and overall ignorance and I’m not here to deny that. Being a black woman who likes rap music can often lead me to struggle with my identity as one. Like many other black women in my position, I ask myself: “Am I black first or am I a woman first?” This question can be pondered for years on end. How can we like music that hates who we are? And furthermore, what does it say about how we view ourselves?

Though “not all rappers” are like this, there’s enough for us to feel there is a problem. But it wasn’t always like this. In the early 1990s many Black artists put out music that praised black women and black love. Deceased rap artist Tupac Shakur produced a song titled ‘Keep Ya Head Up’ where he discussed the horrendous ways women were treated in society and his stance on pro-choice politics and rape culture. The song is regarded as a “feminist anthem”. He raps:
“I wonder why we take from our women/ Why we rape our women- do we hate our women?/ I think it’s time to kill for our women/ Time to heal our women, be real to our women/ And if we don’t we’ll have a race of babies that will hate the ladies that make the babies/ And since a man can’t make one/ He has no right to tell a woman when and where to create one.”
Tupac paved the way for black women to be praised in rap music. Rappers like Common, Arrested Development, and BlackStar all put out music honoring black women. The one thing these rappers all have in common, though, is that the were all very prevalent in the nineties. Over time, positive messages regarding black women got lost and transformed into what we now have in today’s rap music.

Much of today's rap music consists of lyrics about drugs, guns, and sex, to generalize it. Though many of today’s popular artists often say they idolize the artists mentioned before, their music doesn't reflect it. Why? Because over time music became more about the beat than the lyrics. Rappers began to spew meaningless words into a mic and place them behind a good beat and thus a rap song is born.

I am painfully aware of the terms that women are referred to in many songs, from ‘B***h’ to ‘H*’ to ‘S*ut’. YG, a Compton raised rapper, rapped:
“You f*cking who you want, not thinking you was wrong /B*tch you wish you was a n*gga/ Damn you should be ashamed/ Acting like those p*ssy lips can't hang (can't hang)”
in his song titled ‘She Wish She Was’. He publicly flaunts his opinion on sexually liberated women and shames them for behaving in the same manner that is accepted in men. It’s even worse for black women because we are subjected to hearing men from our own race say they don’t want us. Rapper Kodak Black said in his song ‘I Don’t Want No Black B***h’:
“Where them yellow bones/ I don’t want no black b***h/ I’m already black/ Don’t need no black b***h”.
What does this say about black women who still support this man, and what does this say about those who rap along? Why is it so hard for black women to let these problematic black men like Kodak Black go?

The answer may lie in the culture. Speaking from personal experience as a black girl from the inner city of Los Angeles, rap music played a big part in my childhood. Knowing the lyrics to popular songs meant you were cool and “dope”. We’re taught to just dance along and ignore the lyrics because they don’t mean anything and we end up inevitably supporting these artists who don’t support us. As a child though, I never listened to the lyrics heavily because I figured that if it was bad, my mother wouldn’t allow me to listen to it. It wasn’t until I grew up that I realized that much of this music was against my existence as a woman.

In the black community, not liking rap music or choosing to not support a certain artist will get you ostracized. Oftentimes black women, including myself, ignore the negative aspects of rap music because we want to continue feeling like we’re a part of the black community. We keep dancing and singing along because we don’t hear the lyrics, we focus on the beat and the people around us. Time and time again, we get shamed into silence because we see other black people singing along and come to the conclusion that because no one else is angry at the lyrics, we shouldn’t be either. We consciously put our black identity before our identity as women because being angry at Kodak Black is easier than getting angry at YG. Why? Because one only hates women while the other hates who we are entirely. So again, we ask ourselves “Am I black first or am I a woman first?” The answer is, we’re both. We’ll always be both.