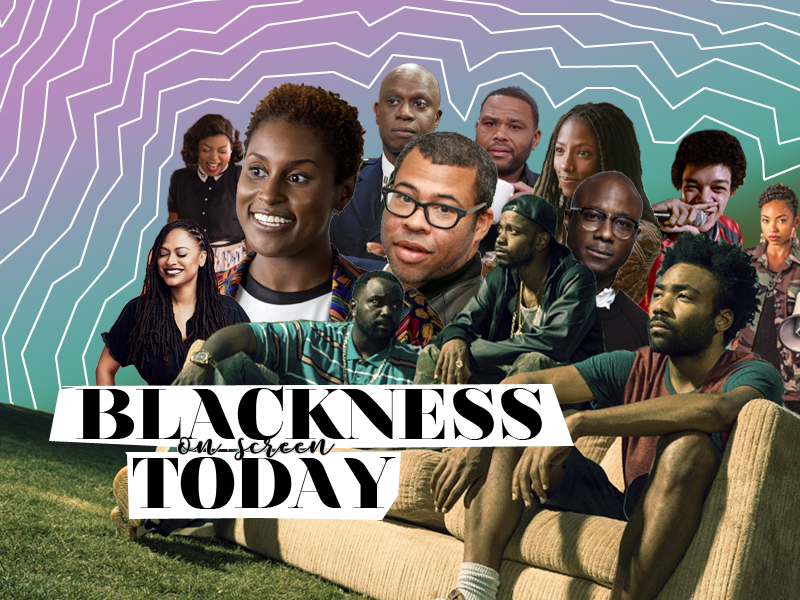 Article by: Adele Lukusa
Collage by: Adele Lukusa
Image description: A collage with a graident background with the stars of HBO's Atlanta, (from left to right) Brian Tyree Henrey, Lakeith Stanfield and Donald Glover splayed on the bottom half of the collage. Behind them, there is (from left to right) Ava Duvernay, Taraji P. Henson in Hidden Figures, Issae Rae in Insecure, Andre Braugher in Brooklyn Nine-Nine, Jordan Peele, Anthony Aderson in Blackish, Rutina Wesley in Queen Sugar, Barry Jenkins, Justice Smith in The Get Down and Logan Browning in Dear White People.

WARNING: Spoilers for TV show Orange is the New Black ahead.

The past couple of years have been amazing for the representation of blackness, especially on TV and in film. With shows like Blackish and Atlanta and movies like Moonlight and Hidden Figures, the world is finally being presented multiple facets of blackness that have never been showcased before. These mediums are riffed with multiple black perspectives, allowing diverse black experiences that have never had the chance to hit screens big and small. In a world where black voices are still neglected, the emergence of black characters that diminish stereotypes of blackness sheds light on the importance of providing space for three-dimensional portrayals.

For so long, black people haven’t had the chance to portray themselves truthfully and honestly, but with productions like Moonlight, The Get Down, Queen Sugar and more, black LGBTQ+ people are finally being seen on TV, even in works that don’t have mainly black casts, like Doctor Who’s latest season, Brooklyn Nine-Nine and Sense8. To have characters who are both black and not straight is amazing and groundbreaking. There may still be cases like Poussey, a black lesbian character on Orange Is the New Black, being sacrificed for a plot point that also fit as another “bury your gays” archetype, but characters like Moonlight’s Chiron, The Get Down’s Dizzee, and Sense8’s Amanita makes the future look so bright. Never have I seen the quiet discovery of sexuality displayed so delicately than in Moonlight, romantic love between two women portrayed so powerfully like in Sense8, or the acceptance of one’s sexuality illustrated so truthfully and vibrantly in The Get Down. To see blackness that doesn’t cater to cis-heteronormativity is amazing, and seeing the care put into these characters in a world that is still rampant and explicit with homophobia and transphobia is extremely important, leaving a tremendous impact on black LGBTQ+ individuals.

Whether we’d like to admit or not, stereotypes still plague the roles played by minorities, and that is no exception for black people. Although last year proved to have the highest percentage of regular black roles on TV in the last twelve years, this doesn’t exempt these roles from being stereotypical. Coming from a past of hardship and oppression which remains unresolved to this day, black people are unable to ignore the way that their blackness molds them and shapes their lives and perspectives. Anger and passion is a given for black people and all minorities, especially when looking at the troubles they face with the judicial system, workforce and more. This fire and passion for justice is caricatured by stereotypes of the Angry Black Man or Woman or the Malcolm Xerox. Black people have different relationships with their blackness, politics, and racism, yet many TV shows and films simplify black activism into senseless anger and debates, oftentimes comedically. Constantly, black characters following this trope “pull the race card” by bringing in race as much as they can, which can be seen in both Dear White People and Blackish. Played comedically with Dre and seriously with Sam, both are seen as obsessed with protesting, racism, and debating, which does nothing but simplify black people and their long-term relationship with activism. Black people shouldn’t be narrowed down to the causes they fight for because they are much more than that. They are people with feelings and emotions, people who have different interests and perspectives, people who aren’t wondering whether or not this or that is “woke”. Black characters who are explicitly angered by these issues are important, of course, but centering their entire personality around this facet seems lazy and counterproductive and only ever seems to benefit non-black people who want to seem more hip and knowledgeable about black issues today.

It’s been a long time coming, but I’m glad that so many black characters are seeing the light of the day; the representation that I, as well as millions of other black folks, needed in their youth and still need today. Seeing black people play characters other than the light-skinned love interest, the sassy and independent black best friend and basic comic relief is refreshing, relieving and only gives me more hope for the future. And with help of black creators like Barry Jenkins, Ava Duvernay, Donald Glover, Issae Rae and the millions more to come, I only grow more excited for the black works yet to come.
adele lukasa black identity black people blackness film movies tv