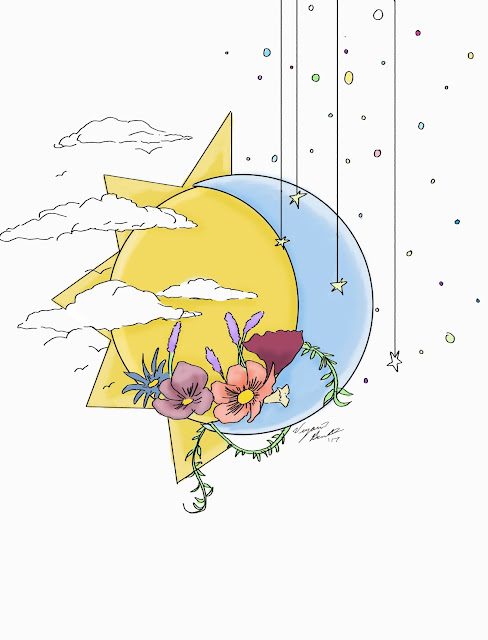 Poem by: Amelia A J Foy
Art by: Viyanca Bennett


the moon and the sun are the same,
homo
the moon would not exist without the sun
and her loving warmth
before homo sapiens and homos and homophobia
they were homo star-crossed lovers:
the same light, the same night
the same attraction, the moon to the sun
dancing round and round
and the sun pulling the moon in,
spinning her
a solar system for a ballroom and
a hundred billion years for eternity
with spectating stars winking, longing from a distance
for their own moon.

i’m not for gendering what is genderless but
the moon and the sun were lovers like you and me
and light and dark birthed yin and yang
not in opposites attracting but
similarities complementing
because human-made binaries have no place in space:
the sun centres 12 planets and holds the moon when the earth turns away
clandestine, silent, precious,
kisses the footprint-shaped bruises man has made
whispers: “shine”
the moon and the sun are just like us
because heteronormativity has no place in space.

the moon and the sun are the same,
homo -
look up and see the moon linger in the morning
to say “goodbye, i love you”
they exist because of their love
they exist because they are the same
and as they shine down on us
how dare you tell us to feel ashamed?
amelia gsm lgbt love moon poem poetry queer sapphic space sun viyanca wlw