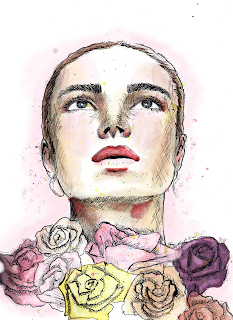 
Light will cast herself over the horizon as her lover fades into the deep.
The moon will return,
For their devotion is never-ending
And will continue to do so until time itself ceases to exist.

But what is there to come after?
Is there not an eternity following the sun and her moon?

Meanwhile she will nurture a rose until it blossoms,
And in the midst of such beauty
Its stem will be plucked from the earth and planted in foreign soil
- Where the petals will start to wither and its thorns will begin to soften.

In its place another bud will take root,
Flowering in the spring and again in the fall.

A snake sheds its skin under her evening glow,
Only after having tasted the forbidden fruit.
The tart flavour lingers on its tongue
As scale morphs to skin and a woman emerges from what has been shed.

With each footprint Eve leaves behind,
She is a step closer to her own heaven.

The sun reaches the same windowsill every morning
Where a girl awaits her arrival.
Lips mimic the movement of a prayer,
As she begs for her life to be more than just survival.

But by the time a shooting star crosses the path of the moon,
She has learned to make her own fate.

The sun will continue to be,
Gifting the world with her light.
She knows nothing is permanent,
But isn’t that the whole point?