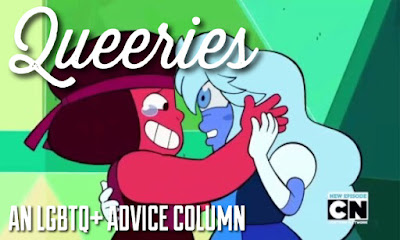 Queeries is an LGBTQ+ advice column catering to any individual across the gender and sexuality spectrum. Throughout this series, we will be answering questions or “inqueeries” that readers may have, and hopefully provide some closure and/or useful advice that can be used in everyday life. All questions are anonymous and will be answered to the very best of our abilities. Inqueeries can be sent to our Instagram’s DM @risenzine, Twitter DM: @risenzine,  email address: risenzine@gmail.com, or Tumblr page: risenmags.tumblr.com
Happy reading!


One. “What is your opinion on all of the celebrities/internet personalities coming out as bisexual? A part of me is accepting of the fact that more people are embracing their sexuality, but I feel like some people treat it as a trend.”


Charis:
It may seem “like a trend” with the current rise in people coming out as bisexual; however, treating it as such can be dangerous and invalidating to bisexual identities. We should absolutely celebrate how comfortable people are becoming with themselves and they way they are not suppressing their identities in favor of fitting in. Many people still don’t believe bisexuals exist and that they should “just choose”. In that sense, the normalization of different sexualities is definitely helping the bi community to be better understood and more accepted; especially since the community is constantly under scrutiny. It takes bravery to accept one’s identity so I don’t think it’s “trendy”. Sexuality can also be fluid and if that’s the identity they choose to label themselves as, then we shouldn’t undermine and invalidate it. Representation is so incredibly important and every time someone comes out as bisexual, more and more people are able to come to terms with their own sexuality as well.


Amelia:
As LGBTQ+ issues gain more traction, more people have room to explore their sexuality. There are far more resources out there and, as with many things, the more that people do something, the more others will follow - the more people who come out, the more who will follow suit. While you could call this a “trend”, I feel like that implies these people are faking their bisexuality in some form for attention, and I really don’t believe that this is something we should perpetuate. As a bisexual woman, I’ve dealt with that same stigma - “it’s just a phase”, “you’re doing it for attention”, “it’s trendy” - and it’s extremely hurtful. There’s a reason that bisexuals are subject to higher rates of mental illness and less likely to come out or find safe inclusive spaces than lesbian and gay people. I’m so happy to see more bisexual individuals coming out and saying “I’m here, I’m bisexual, and it’s 100% valid”, because if I was exposed to that kind of support when I was younger, it would’ve made me feel so much better in myself. I don’t want other young bi teens to go through what me and others have - so, all in all, the more the merrier!


Two. “How do you deal with bigotry? Sometimes I want to educate the person but most times I want to punch them because I feel they should know better by now.”


S:
I try to take a deep breath and remind myself that not everyone can be at the same level at any time. There's always going to be more information out there and individuals who know more, so to me, it's important to support and encourage those individuals who may annoy us to educate themselves through the vast resources out there, rather than get mad and discourage them from becoming more aware of this important section of society. Resources such as websites, social media accounts, or even Youtube videos can be helpful in this endeavor, and whoever you help will most likely be grateful and more knowledgeable because of you help.


S: I go to a relatively conservative school, so I know just how frustrating bigotry can be. I deal with it in one of two ways. If I feel like putting in the emotional labor (remember, you aren’t obligated to educate anyone!) and I believe that I am in a safe environment with someone who is willing to listen, then I just go for it. I pull up articles, facts, and statistics and support my point in hopes that maybe they’ll learn something. Educating someone can be so gratifying, but there are times when it isn’t necessarily safe to educate people because of how negatively they might react, or maybe you’ve had the discussion before and you can’t seem to change their mind. These are the times when I back off, take a breath, and let it go. Obviously, it’s up to you to make the distinction on what to do in what situation, but this is just how I manage. Best of luck!


Three. “I identify as lesbian but sometimes find myself liking the attention of men. Is that bad?”


Amelia:
I believe it’s important to distinguish between your own romantic/sexual attraction to others and receiving affection from other people. Many of us enjoy receiving compliments from other people and their romantic interest in you can be flattering despite your own sexuality. It’s also important to note that, in a heteronormative society, the attention of men is seen as the be-all-end-all for women and femmes, and it can be hard to dismantle something so ingrained in our psyches. However, ultimately I don’t believe it makes your lesbianism any less valid - if you love women/femmes, then you love women/femmes, no matter how you receive the attention of men.


A:
Like Amelia said, it does feel good to be complemented by another person, regardless of their gender and/or your sexual orientation. With that in mind, I think that it is important to remember that sexuality is fluid. Some people find comfort in restricting themselves to a single label for their sexual orientation, which is perfectly fine, but don’t feel as if you have to fit into the mold of what you feel like a lesbian should be/how you think a lesbian should act. Just because you like the attention of men doesn’t mean that you  are any less of a lesbian.


I feel like attention and sexuality are different things and a desire for attention from a man does not necessarily take away from how you sexually identify. Having the attention of a man can almost feel like you have power over him even if it’s because it’s ingrained in women to pursue the attention of a man. Like “A” said, sexuality is fluid so really no biggie! However you identify is valid, you are you! (and we love you!!!)