Never Gonna Give EU Up

Thousands march towards the Houses of Parliament, many dressed in blue and yellow and waving the EU Flag. One sign reads: 'Solidarity Forever. The Union Makes Us Strong' - Image courtesy of Reuters/Metro


Staff writer Vita Pearl went to the Unite for Europe March to protest the xenophobia the Brexit campaign is based on and demand the government check in with the British people, who feel lied to by the Brexit campaign, before triggering article 50, which will hurt immigrants and make the younger generations live with this poor decision their whole lives.
Tens of thousands of people from across the UK gathered in London on Saturday for the Unite for Europe March. Although the BBC gave it only a few seconds of coverage on the day’s six o’clock national news, this anti-Brexit march was hugely important. PM Theresa May and Brexiters repeatedly say that the people have spoken; this march made one thing clear - the people are still trying to be heard.


The protesters marched from Green Park to the Houses of Parliament, which is just over a mile. The name of this protest was based in unity and this was reflected in the mood of the event. To be standing in solidarity with so many people felt powerful, at a time when xenophobia has been the root of pro-Brexit arguments (and a steep rise in hate crime their consequence). Before the protesters had even started to move, you could see the spirit of friendship and sharing that made this march - a man holding a bunch of bamboo sticks giving one to a teenage protester so her sign could be seen, people talking to people they’d never met before. At one point in the rally besides Parliament, a speaker told members of the crowd to hug the person next to them, and the crowd obliged. Complete strangers embraced each other: recent immigrants, pensioners, young people, people holding pride flags. This made me feel proud of the people in my country and their attitudes, which were rather unlike the unwelcoming attitudes Brexiters have used to frame their campaign as patriotic.

The protesters also stood in a moment of silence for the victims of the London attack, only a minute away from the site of the attack. In that moment everyone in the crowd understood the danger of hatred and violence and knew we could not allow them to grow within our country.

A more disappointing element of the protest was the minimal turnout of young people. There seemed to be more young children than engaged teenagers. Although it is clear that young people overwhelmingly want their country to stay in the EU as 75 per cent of the 18-24 year old vote went to the Remain campaign, only 36 per cent of this age group turned up at the polling station. Older generations try time and time again to quiet the political voices of Millennials and Generation Zs. Now we’re doing their work for them.

You don’t need to go to a protest with a slogan or sign. Being a body at a protest is enough. Turn out. It’s your responsibility to your fellow citizens. If you can’t get to a protest for any reason, and even if you can: start the conversations, share the petition or that post that you know might make you lose a few followers, push yourself to do what you can. We are the generation that will live with the effects of Brexit for the longest; we cannot miss any opportunity to make our voices heard. 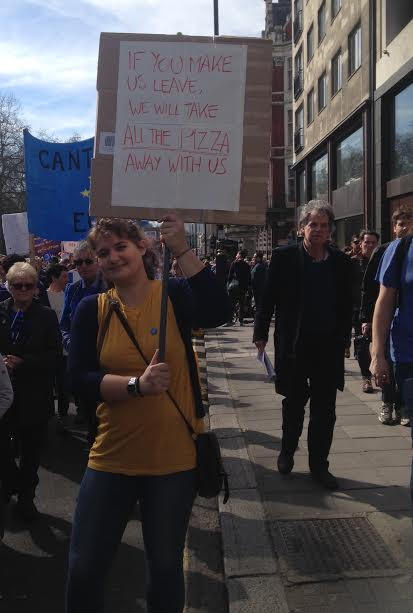 ‘If you make us leave, we will take all the pizza away with us.’