by Ruthie
(image courtesy of One Spirit) 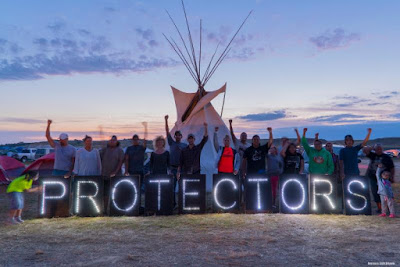 Look into their eyes
Look across 1,200 miles
Sweet honey fields to Lake Oahe
From the hands of the Missouri,
To snowy bluffs with whitewashed skies
Kids running with ribbons in their hair
Look into their eyes, see the stripes of red, white, and blue
Threatening to take the color away

Look at their hands
Chapped with frostbitten scabs that have almost knocked them down
That’s what the bite of 28 degrees and fists of water do
The way a weak fire churns
But they have their own fire,
one that burns down deep inside the crevices of the human psyche
No fists of water can dare put out

Look at their dollar bills
All 3.8 billion of them
Floating over his grandparents’ grandparents’ ground
Spreading under the soil of the Sioux
Green green all they see is green
Spilling out a muddy brown
Using the very men who murdered
To pay for the modern massacre

Look them in the eye
Don’t look
See