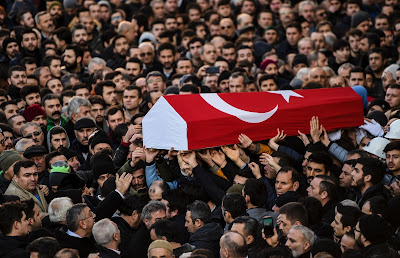 The nightclub Reina, located in Istanbul, Turkey, fell victim to a terrorist attack on January 1, 2017. With 39 people deceased and only 8 suspects detained, authorities in Turkey are still in search of their main suspect who they believe to be the only person that carried out the attack. They received two photos of the man in question, who they believe carried out the attack by himself. Though his identity has not been determined yet, the spokesperson for the government has disclosed that fingerprints were found that they believe belong to the assailant.

Although it has not been confirmed, the terrorist group ISIS has claimed responsibility for this act of terror(Arango). A statement was issued saying, “A hero soldier of the caliphate attacked one of the most famous nightclubs, where Christians celebrated their pagan holiday.”

Whether or not the attacker is apart of ISIS or was just inspired by them is still unknown. Just several days ago, the Nashir Media Foundation, a pro-Islamic State group, published messages advocating for attacks on markets, clubs, and movie theaters (Arango).

Among the 39 people killed, many victims were from different countries like Morocco, India, Canada, Russia, Jordan, Tunisia, Saudi Arabia and Kuwait. The first victim killed was Fatih Cakamk, a security guard outside the club. Only 32 years old, he “considered himself lucky”, as he had survived an attack in December outside of Istanbul’s Vodafone Arena.

Reports from today say that 46 people are still being treated. Several people that were injured are said to be in critical condition. The Reina nightclub issued a statement on Facebook saying, “This terrible incident is a terror attack against our citizens’ peace, brotherhood, serenity, economy, tourism, and against our nation. Our hearts bleed and the bullets are in our heart.”

The deputy prime minister of Turkey believes that the attack was in response to Turkey’s ground operation against ISIS (Lee, McKirdy, and Yan). Because Turkey and Syria share a 500 mile long border, it is said that it is rather easy for ISIS soldiers to get weapons and supplies across the border. Turkey is currently fighting against both ISIS and the Kurdish Workers’ Party.


Authorities are worried that a copycat attack may occur in the United States because ISIS has claimed responsibility for this attack when they usually steer clear of doing such things.Because the United States has over 300 million guns, one of the main worries is that someone will get a hold of one and use it to recreate a situation such as this one.