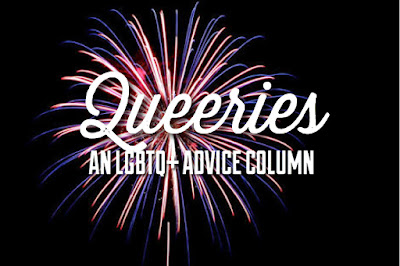 Queeries is an LGBTQ+ advice column catering to any individual across the gender and sexuality spectrum. Throughout this series, we will be answering questions or “inqueeries” that readers may have, and hopefully provide some closure and/or useful advice that can be used in everyday life. All questions are anonymous and will be answered to the very best of our abilities. Inqueeries can be sent to our Instagram’s DM @risenzine, Twitter DM: @risenzine,  email address: risenzine@gmail.com, or Tumblr page: risenmags.tumblr.com
Happy reading!

One. “What are your opinions on gay shipping in fandoms, especially when the characters are not queer?

I have two major feelings towards this. Firstly, the queer community needs representation in the media, so any queer relationships I see I’m definitely here for, and I’m really happy when they gain support! I also feel like shipping two characters who aren’t queer together is fine, especially given the lack of representation - a lot of queer relationships have historically existed in subtext, so reading between the lines isn’t anything new to us. But here’s my issue: when shipping transforms to fetishisation. In fandoms of shows, you often see straight fans discussing how ‘hot’ their (cis, white, straight, male) faves would be together, while ignoring actual characters or celebrities who are queer. This makes me feel uncomfortable, as though I am an object, like my identity is only desirable in a certain form, only acceptable to the heterosexual gaze. Then there’s the issue of queerbaiting: when shows will tease at the idea of two same-sex characters liking each other, but turn around and laugh at us for actually suggesting such a scenario (e.g. Sherlock, Supernatural…). All this is counterproductive to the lgbtq+ community. We should push for actual representation, not settle for an almost-there-but-never-realised fantasy.

I’ve never really had an in-depth thought about this topic until now, and the first thing that comes to mind is fan art. You can tell how committed fans are when they use their talent and time to create art for their ship, be it lgbtq+ or otherwise. I think, through these mediums like sketches, fanfiction, etc., our community gains a certain degree of representation within fandoms. However, gay shipping can also be quite problematic, especially when the characters being coupled together are not in fact queer. This sort of mindset, I believe, can be detrimental to the lgbtq+ community as it assists in perpetuating the idea that it is okay to falsely represent a marginalised group of people. Another issue that arises with gay shipping can sometimes be the fans themselves. There are the few people within fandoms that are more than willing to create art for their gay ship and stand behind their beliefs, but choose to remain silent as the lgbtq+ community are mistreated and discriminated against. It is frustrating to see that people think they can pick and choose aspects of queers that are only beneficial to their ship and completely disregard the rest. It is just as equally - if not, more - important to use your platform to speak out about the injustices lgbtq+ people face, as it is to create art for a gay ship. As with most things, consent is paramount, especially in terms of singers, actors, and other creators that live in the real world. If the individual does not have anything against their character being portrayed as lgbtq+ in fandoms, then artists can have creative freedom over the their work. However, if the individual is uncomfortable with having their character/personality depicted in such a way, then, as fans, we should respect their wishes.

I don’t think there’s any harm in doing this, as long it’s not taken outside of the box. Watching a show or reading a comic and discussing a cute pairing with friends, or as has been said, creating fan art or other types of work related to that pairing is totally fine by me. Seeing all types of people embracing the LGBTQ+ community, even if it’s in a bit of an unorthodox way, is definitely a plus. While the characters involved may not actually be queer, there doesn’t seem to be too much harm (in my opinion) with shipping two individuals within a given media (TV, book, movie, etc.). However, the line is really drawn when those same fans who so vehemently ship their favorite characters and spend much time creating art, writing, conversation, and fan accounts, don’t use those same platforms and passions when the real-world LGBTQ+ community finds itself on the line. Taking the good and ignoring the bad is not how it works. When one sorts through what they like instead of embracing the full picture wholeheartedly, the community itself is hurt because of it. If you’re only interested in watching your favorite characters be happy, yet aren’t ready to defend them when the forces that be threaten that happiness, how much of a fan are you really? That’s an important contradiction that often goes unnoted, but should definitely be considered more often.

This is a really common question in the LGBT+ community since many identities are similar, but there are some differences. The term “pan” means “all” so pansexuals are attracted to all genders, while“poly” means “many” so it is the attraction to many genders, but not all. These are different from bisexuals as this is the attraction to two genders. As always, it will depend on the individual and what they prefer to identify as.

Concerning the differences between asexual and aromantic, there are several different forms of attraction:

An asexual is not sexually attracted to anyone, whilst an aromantic doesn’t feel romantic attraction towards anyone. It is possible to be asexual and still have a romantic orientation; many asexuals pursue romantic relationships. It is also possible to be aromantic and still have a sexual orientation. Sometimes, people are both and lack attraction in both aspects. I hope these explanations help you to understand these often confused communities!

Three. “Recommendations for films or television shows for 2017 that are coming out or have already? (no pun intended).”

But I’m a Cheerleader- This movie will forever have a place in my heart as a cinematic masterpiece as well as my first LGBTQ+ film, a movie for queer people, about queer people, by queer people, starring queer people. While the characters have gone under fire for reinforcing stereotypes, the 90’s film harbors characters both butch and femme and as decider.com puts it, “Babbit uses gender stereotypes as a way to criticize our culture’s obsession with binary of gender performance: girls must act like women…, whereas boys must act like men…” The lighthearted story follows Megan who is taken to a reparative therapy camp despite her claims of heteronormativity because she’s a cheerleader. I promise the camp isn’t too heartbreaking (it’s overly silly) but rather heartwarming (spoiler: you will fall in love with every character!)

Modern Family- Hey! I know this is a show everyone watches but it doesn't take away from the fact that it is one of the only highly successful show with a (living) gay couple! I’m not saying shows with queer characters aren’t successful, but Modern Family is the only highly mainstream, popular show I have yet to see with gay characters.

The Way He Looks- A sweet coming-of-age film following a growing friendship between Leo and a new boy in class, Gabriel. Our own Film Club Friday made a review on the film here: http://www.risenzine.com/2016/03/film-club-friday-way-he-looks.html

Orange is the New Black- The Netflix original show follows Piper Chapman and life in prison in upstate New York. The diverse, lgbtq+ friendly cast also play lgbtq+ roles, with prisoners showcased as butch and femme, with cameos of pillow princess as well as a transgender woman, all part of the main cast.

Skam - This show is basically the Norwegian version of Skins, but better. Each season is about one character and season 3 revolves around a boy who likes boys (and his boyfriend).

Eyewitness - If you like crime type shows/murder mysteries and character development, this is the show for you! It’s about two boys in a small town who witness a murder while together and have to keep quiet about it because they aren't out yet. It’s one of those shows that makes you wanna keep watching once you finish an episode.

Yuri!!! on Ice -  This is one of the first sports animes to actually have canonically gay characters! The show is finished and has ten episodes. It’s about Japanese figure skater Yuri and his coach/idol, Viktor.

Sense8 - Season two is out this year! If you haven't seen it already, it's a Netflix show with eight diverse characters including a trans woman and her girlfriend, and a gay man and his boyfriend. The first season was great and I’ve been so excited for the second one.
Please Like Me - This is an Australian show that needs way more attention. It revolves around the life of a guy named Josh who has just realized he's gay. The show is a comedy, but it has honest characters and can still talk about issues like mental illness (there are many mentally ill characters, like Josh's mom and her friends), coming out, abortion, and more. It’s awkward and relatable and funny, and each episode is named after a food they make in that episode, which is also cute. It’s a great show! You can watch it on Hulu.

In The Flesh - This show takes place in a world recovering from a zombie apocalypse. Zombies have been cured, and now that they're no longer a danger, they're being reintegrated into society. In it's two, short seasons and tackles topics like discrimination. Told through the eyes of a strong, sensitive, pansexual main character, it's like your favorite zombie show, but smarter!

Four. “I feel like I have been seeing a lot of hostility between bisexual girls and lesbians lately. What are your thoughts on this?”

To be honest, I don’t think I’ve noticed any rising hostility between the two groups lately, but it’s possible that I’m just oblivious. Unfortunately, I do know that biphobia from lesbians and lesbophobia from bi femmes is something that happens. It makes me so sad to think that there are lesbians and bi femmes who don’t support each other and I feel like we definitely have a lot of shared history and experiences. It isn’t my intention to equate the two identities, because despite our similarities, lesbians and bi femmes won’t experience relationships, oppression, and life in general in the same way. However, I truly believe it’s important for all WLW to be supportive of one another. Our oppression is not the same, but there are often similar facets, and solidarity as LGBT+ femmes is so wonderful and comforting. In WLW communities we need to embrace both our differences and similarities in order to work together effectively because we really are stronger together.

Personally, I haven’t noticed any increase in this hostility, but I have seen tension between lesbians and bisexual girls for a while. For example, I have seen (and experienced as a bisexual girl) a lot of biphobia from the lesbian community - the idea that we will cheat and ultimately end up with a man, or that we’re lying or experimenting, is something quite prevalent. Often we’re dubbed as “straight girls”, and so our sapphic identities are erased. At the same time, bisexual girls can perpetuate lesbophobia, which increases the tension between the two groups. It’s a situation that I think is counterproductive to the community. At the end of the day, we are women (and femmes) who love women (and femmes), and we shouldn’t attack each other; if we want justice and equality, we need to support and uplift each other instead of being dismissive and belittling towards one another’s struggles.
amelia charis jinny queeries