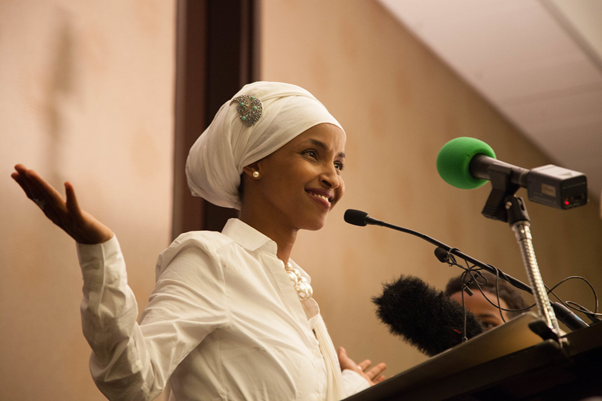 Ilhan Omar has made history by receiving the title as the first Somali-American to be sworn in as a lawmaker in the Minnesota House of Representatives.

The 34-year-old came to America when she was 14 from a refugee camp in Kenya, a country which hosts hundreds of thousands of Somali refugees. She learned English in three months and later earned a degree in political science.

After graduating, she became a community organizer and is currently the director of policy at Women Organizing Women Network, a group which helps to push African women into civic leadership roles. Her powerful involvement in politics was met with rivalry. Most especially, she was beaten into a concussion by seven or eight people during a fired gathering that erupted in violence two years ago.

As Trump has openly chosen for a ban on Muslims coming to the country and refused to rule out an ID system, the idea of a visibly Muslim woman holding office drew national attention, and also brought Omar negative scrutiny.

She was accused by conservative websites of immigration fraud shortly after her victory, as they indicted an estranged husband who she’s in the process of divorcing, is in fact her brother, a charge she denied.

“The Muslim community needs a win,” says Asad Zaman, Executive Director of the Muslim American Society of Minnesota. “This entire election cycle has been dominated by negativity towards immigrants and Muslims.”

Zaman was one of dozens of supporters who filled the Minnesota State Capitol on the opening day of the new legislative session, in between events marking Ilhan Omar’s historic first day on the job as state lawmaker, which included a ceremonial oath of office - complete with a commemorative Quran - on the floor of the Minnesota House of Representatives.

Ilhan Omar’s campaign provides some insight into her wider appeal across racial, ethnic, and religious divides. “Politics is the art of inclusion,” Asad Zaman explained. “Ilhan Omar has practiced inclusive politics as she’s been able to put forth a candidacy that is attractive to a largely white liberal group of voters and she has convinced them she is the best candidate.”

“I have had interview requests from Turkey and Al Jazeera in Qatar,” he told VOA. “So this is a big deal and I think the whole world is watching what we are doing here today.”

Which is why Ilhan Omar says one of her biggest tests now is living up to the hopes people have for her as she continues to chart a historic path forward in Minnesota’s House of Representatives.