Standing Rock: the Story and Guide 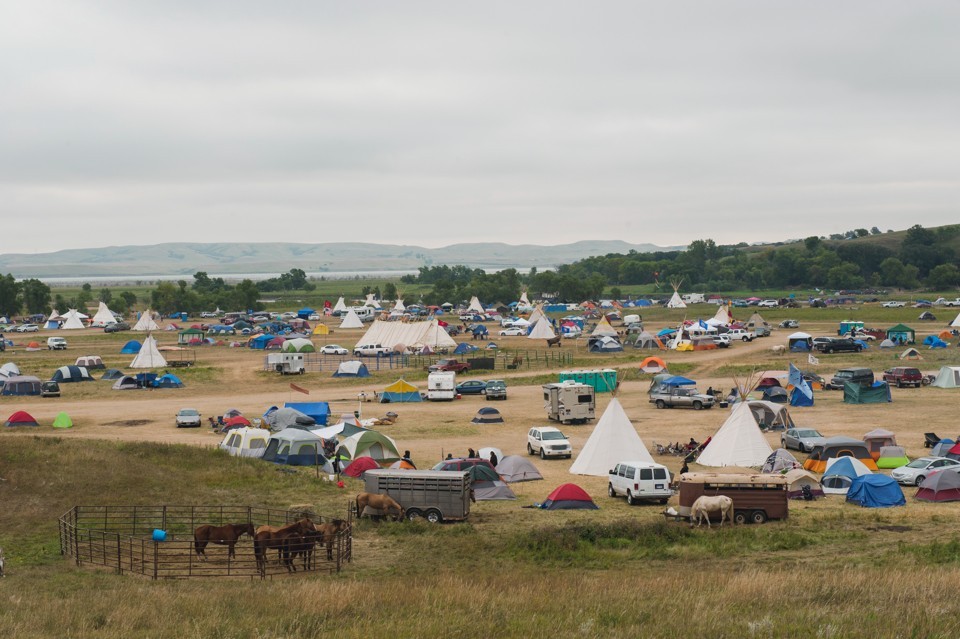 “When I was a boy, the Sioux owned the world. The sun rose and set on their land; they sent ten thousand men to battle. Where are the warriors today? Who slew them? Where are our lands? Who owns them?”

The geographical and societal makeup of the United States has been shifting since Christopher Columbus first touched the soil of the New World, altering the course of history for hundreds of years to come and almost bringing down an entire civilization with him. To this very day, human desire for expansion and power continues to influence America the free, brave, and ever-divided.

On January 25th, yet another divide was created across the American midwest when the first permits for the Dakota Access Pipeline were approved, separating Native American tribes with centuries long holdings on sacred lands, and businessmen with a drive to create commerce and jobs as well as provide a faster, more efficient route for interstate petroleum transfer.

The Dakota Access Pipeline Project is a crude oil pipeline stretching about 1,172 miles through North Dakota, South Dakota, Iowa, and ending at the Patoka, Illinois river port. Through this port, the pipeline could potentially provide national markets in the East, Midwest, and Gulf Coast regions with the valuable commodity in more cost-effective manner than ever before seen (previous methods including rail and truck transportation). The first permit applications for the project were approved in January of this year. In July, the Army Corps of Engineers granted approved the final project in its entirety.

The draw to such a nondescript region of the Midwestern U.S. is the vast oil reserves that hold a reported 7.4 billion barrels of untapped oil, which can be found under the American side of the Bakken Formation in North Dakota, a 200,000 square mile land mass in the northeast of the state.

Project leaders also claim that the pipeline will bring between 8,000-12,000 jobs to the four states involved and leave about forty permanent jobs at the completion of the oil line, previously claimed to be functional at the close of 2016. But at this rate, that end date could be in deep jeopardy.

Since early April of 2016, Sioux tribal members and countless supporters have rounded up resources and settled near Cannon Ball, North Dakota, a site near the first construction areas of the pipeline. These demonstrators are protesting the pipeline’s realization in an attempt to delay the operation and hopefully eliminate the project indefinitely. Since the first camp’s setup (dubbed Camp of the Sacred Stone by its Sioux founders) thousands have migrated to the base camp and the ones that have sprung up around it to protest what many are calling a severely risky, disrespectful undertaking. As of December 2nd, anywhere between 1,000 and 3,000 individuals were reported to be maintaining residence at the protest areas. Among those are almost five-hundred Sioux Native Americans and their supporters, various celebrities, and soon to be about 2,000 veterans who wish to support the effort as the weather in North Dakota begins to reach below zero temperatures, a product of the harsh winters of the region.

Social media users have also spoken out with vigor and an intensity that has spread the #NoDAPLmovement far and wide, informing thousands per week through live feeds and photos of the events occurring at the protests. Updates on police force and local government action are frequently highlighted as well. Influential individuals on social media have also used these programs and their popularity in recent months to draw the populace to the importance of the #NoDAPL movement and teach them how they can help.

We have so much to learn from the Standing Rock Sioux. Help them protect their sacred land from the oil industry 🙏🏾 https://t.co/83xZLVXEr4
— Pharrell Williams (@Pharrell) August 18, 2016


Standing with those who are fighting to protect their sacred land and water. #nodapl #waterislife #mniwiconi @taikawaititi I would also like to take this opportunity to raise something that has been bothering me for sometime. Last New Year's Eve I was at a "Lone Ranger" themed party where some of us, myself included, wore the traditional dress of First Nations people. I was stupidly unaware of the offence this may have caused and the sensitivity around this issue. I sincerely and unreservedly apologise to all First Nations people for this thoughtless action. I now appreciate that there is a great need for a deeper understanding of the complex and extensive issues facing indigenous communities. I hope that in highlighting my own ignorance I can help in some small way.
A photo posted by Chris Hemsworth (@chrishemsworth) on Oct 27, 2016 at 6:49pm PDT

We must join the Standing Rock Sioux Tribe and the many tribal nations fighting this dangerous pipeline. #NoDAPL https://t.co/WIeZdRZjqE
— Bernie Sanders (@SenSanders) September 6, 2016


This Thanksgiving, I am grateful to learn more about the origins of the holiday: In the year 1637, 700 unarmed Native Americans of the Pequot tribe were shot and burned alive by English and Dutch mercenaries who wanted their land in Massachusetts. The next day the governor declared "A Day of Thanksgiving" to celebrate the 'victory.' Today, Thanksgiving is a day for families to get together to show and share gratitude. The dark history of the holiday need not overshadow the light we experience, but inform it. I hold this somber history close to me today as I spend time with the American faction of my family. When we hold these truths to the light, we ensure that history does not repeat itself. The Original Americans are still under duress, fighting for the conservation of their land, our water, their rights in Standing Rock, North Dakota. Though I am not physically there, I stand with them and give thanks to all else who do too. #Repost @directher ・・・ Standing with the original Americans today as Native People fight to honor and protect their water, their land, their freedom. #NoDAPL #StandingRock.
A photo posted by Lupita Nyong'o (@lupitanyongo) on Nov 24, 2016 at 2:25pm PST


With an overwhelming outpouring of vocal reception and thousands surging to the site of the ordeal to make a stand, the question begs, “Why here? Why now?”

The Standing Rock Sioux tribe holding residence in the area will give you a couple of reasons. The first is that the lands that Energy Transfer, the pipeline project’s chief backer, wishes to build on house many sacred archaeological sites packed with relics, burial grounds, and other important cultural and historic features that should remain untouched and sanctified. Documents used during the ongoing federal trial (Standing Rock Sioux Tribe vs. Army Corps of Engineers (ACE)) also uncovered a serious oversight of the ACE in conducting an updated land survey of the region before the organization approved the region for construction, with a reveal that the government agency had opted to use a 1985 survey of the land in their report instead of conducting a more recent scan of the territory in question,. Updated data would have discovered the cultural and burial sites the Sioux documented and cited during case proceedings. In an unbelievable twist today, the Army recognized this discrepancy and released a statement.

Also in question and much to the dismay of numerous environmental groups as well, is the possibility of an oil leakage through the 30 inch diameter pipes, which in the past have caused anywhere from tens of thousands to upwards of a hundred thousand gallons of thick, noxious oil to burst from pipelines and contaminate oceans and other water sources around the U.S. These breaks can cause extreme depreciation of local animal populations, shut down stretches of water sources necessary for transportation or fishing, and contaminate water supplies of nearby populations both wild and human. In this scenario, the pipes could potentially leak into the Missouri River or Lake Oahe, which not only sustain the Sioux Reservation and the surrounding communities, but numerous cities and townships downstream housing thousands.

The final and possibly most frustrating component of this debacle is that it is most certainly not the first time Native Americans have faced threats to their property and community from invaders. Confrontations first appeared with colonists at the dawn of the North American colonial era, decimating Native populations by the millions, destroying thousands of years of rich culture and entire tribes in the process, and resulting in a present time and nation where Native Americans must still must work to secure lands promised to them in treaties and agreements made hundreds of years prior.

These land-grabs and harsh treatments of Native populations have in many cases resulted in financial instability across reservations nationwide with 27% of the self-identified Native population claiming poverty and an over 60% unemployment rate on the Standing Rock reservation alone as of 2014. Disproportionate representation in American prison populations has also emerged in the criminal justice system. In addition, much of North American Native territory stands on the front lines of dangerous, toxic sites of hydraulic drilling, fracking and tar sands stretching along the Northern US and through parts of Canada.

Cohabitation was certainly not the original goal of the first settlers of the "New World", and that unfortunate cultural standard has evidently stretched into the modern day, under which blatant disregard for the sovereignty of the Sioux and respect for their lands has caused such violence and tension.

As Faith Spotted Eagle, an elder of the Yankton Sioux Reservation in South Dakota who traveled to Standing Rock earlier this year said,

“What if the Great Sioux Nation decided to build a project through Arlington Cemetery? The point would be taken that you don't disturb people that have been put to rest.”

At its core, this issue revolves around respect. The Sioux and other Native nations have fought exceedingly long and hard to maintain their land holdings and develop the community and lives that we take for granted each and every day. It's time for developers to walk away and perhaps take to heart the words of Faith Spotted Eagle, not only allowing the people who’ve been laid to rest at Standing Rock peace, but their descendants and protectors as well.

Please consider donating funds, clothing, food, or your time to any of the following resources who will with enough support, be able to effectively aid the Standing Rock protestors and the movement they are behind. If readers have questions, comments, or concerns they would like to voice, please email us at risenzine@gmail.com.


Ways to contribute to the NoDAPL Movement:


The following graphics offer additional suggestions as to how to reach out to law enforcement and aid in this crisis.