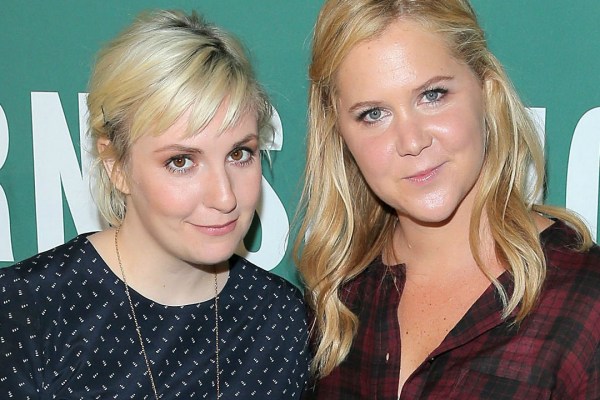 White feminism is harmful because it silences the struggles of the oppressed (e.g. people of color, LGBTQ+ people, women in third world countries, etc). By only focussing on a rather small spectrum of issues and deeming it ‘feminism’, white feminists make the entire feminist movement look like it only cares about women who are  cis-gendered, able-bodied, straight, white and middle-class complaining about the fact that they’re labelled bitchy whenever they’re assertive. Of course, their struggle is still somewhat valid - the blatant sexism that still exists in workplaces is awful - but it’s not exactly on the same level as other, more endangering examples of sexism today: for example, the life expectancy of a trans woman of colour is 35, due to the increased rates of murder and suicide, and discrimination against women prevails in the laws of several countries around the world.

Lena Dunham is a clear representation of white feminism. Activists like her often fail to recognize white privilege and western privilege. They also do not often acknowledge other struggles besides just gender inequality. Most feminists, sometimes referred to as “intersectional feminists” are generally more understanding and educated when it comes down to the other aspects of women’s struggles. Dunham has been known to make racist comments; including sexualization of black men and racial stereotypes during the Odell Beckham incident. Along with that, her show Girls lacks diversity and her Twitter is flooding with ignorant statements. 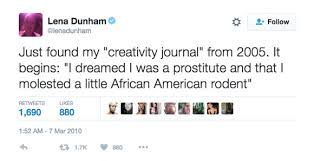 An uncool thought to have: "is that guy walking in the dark behind me a rapist? Never mind, he's Asian."
— Lena Dunham (@lenadunham) 12 July 2011

or at least *a* voice of the oblivious white privilege required to be this casually racist pic.twitter.com/pP6naQoS
— Ayesha A. Siddiqi (@AyeshaASiddiqi) 9 August 2012

Of course, Lena Dunham isn't the only white feminist out there. Here are a few others:

Lena Dunham is most known for her quirky and “groundbreaking” sitcom on HBO, Girls. While continuously criticizing the lack of diversity that there is in the film industry, the show that she is so proud of has a central cast made of only white women. Girls focuses on a group of white female friends that all live in New York. How refreshing and utterly innovative! Characters of color have only ever been presented as supporting characters that may appear in a few episodes. Rapper, actor, and comedian Donald Glover (a.k.a Childish Gambino) guest-starred on her show as a strongly conservative Republican man. He was quickly written off the show, however: it was through a heated breakup with the show’s protagonist that he left the show with an argument that ultimately involved the discussion of race. Despite this significant turn in Girls’s response to race, it is an isolated instance of inspiring more common discourse of race. One moment of diversity does not account for an entire show that is already going on for its sixth season. Dunham has responded to the diversity issue on her by telling how it had been a “painful learning experience” however so far there have been no explicit attempts of diversifying the cast of Girls.

The 2016 Met Gala was full of famous celebrities, beautiful clothes, and Lena Dunham. In an interview with Amy Schumer, Dunham discussed her experience sitting next to Odell Beckham Jr (a wide receiver for the New York Giants). She complained that he ignored her, choosing scrolling through Instagram over conversing with her. She attributed that incident to the fact that she was wearing a suit, going as far as to say, “I was sitting next to Odell Beckham Jr., and it was so amazing because it was like he looked at me and he determined I was not the shape of a woman by his standards. He was like, "That's a marshmallow. That's a child. That's a dog." It wasn't mean — he just seemed confused.” Instead of considering that fact that Beckham could have made the conscious choice to not speak to her because of personal reasons, she immediately assumed it was because of her attire. Forcing Beckham into a harmful, outdated stereotype that black men are savages who only have sex on their minds is racist. . This is also a prime example of white feminism - stereotyping POC to fit their small-minded ideas of the world. After receiving plenty of backlash on the internet, she tweeted these:

However, she soon found that most people don’t accept apologies full of poorly veiled condescension, so she formally apologized on Instagram

Yet can an apology that has only come as a way to save face truly mean that much?
alexis cia dani daniela feminism lena dunham stella white feminism white privilege whitewashing