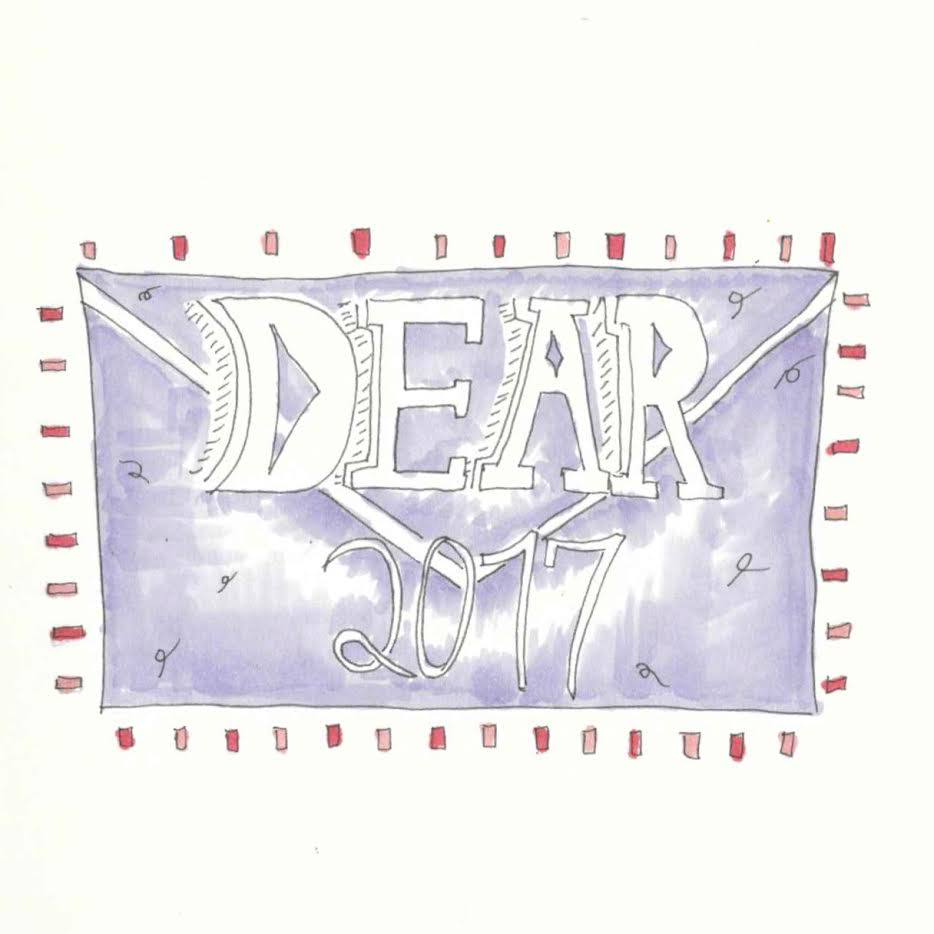 Dear 2017 is a collection of thoughts, goals and hopes for the new year, and reflections on the past year - from self-discovery and hopes for self-growth, to demands of change from the world. As young people, we can grow so much in a year, and what we do make in 2017 may affect the rest of our lives. 2016 has been a year of great change, and we hope to see more positive change in 2017.

Dear 2017,
You are a year I know I will never forget. A year of new beginnings. A year of opening new doors and closing old ones. A year of hello’s and goodbye’s and hopeful see you later’s. 2016 and I have been through a lot. Tragedy. Tears. Disappointments. Anger. But, I have learned to be resilient when I’m in pain. I have learned that in the face of defeat, it is most important to realize that losses don’t mean stop, they don’t mean give up, they mean find another way to get up and keep moving. I have many goals and ambitions for myself and the world I am living in, and in 2016 I realized I could make a change, that truly nothing was out of reach. I started believing in the idea of hope, that despite the obstacles I have and will face, there is a wisp of fire within me that will never die down.  And you, 2017, you are the first pebble in the water that will create ripples that will last an entire lifetime.


greenery
i am the fresh and zesty yellow-green shade that shall evokethe first days of spring; that shall rid your screens of the smokeand mirrors that have fogged up the screens of the drowsy and the woke -i am omnipresent, peripheral, a breath of fresh air, your tokenreminder of vitality and what it means to properly soak in the hope that the air wants to hang heavy with these days. in an almost brokenpost-brexit earth with an unbelievable disregard for its own worth i am the balance between land and sea, between the poor and peace andall of the elbow grease required to revive, restore and renew the thingsthat we knew too late to act upon. I am the life-affirming, the woebegone.i am known as the near future: that proximate phenomenon which dutifully wraps its hands around things and uproots themand relocates them until they flower or bear fruit (only time can tell)

In 2016, representation through television and cinema yet again broke long-standing barriers in powerful ways. From How to Get Away with Murder to Skam, from the long-awaited response to #OscarsSoWhite, to the myriad of strong female leads in 2016’s screen time, TV and movies surprised and excited across the board. In 2017, we must continue this push forward through these media outlets, diversifying and creating a complex network of faces and stories across the world’s screens, embracing cultures and identities too long neglected and forgotten. Below is a poem summarizing these statements and voicing these concerns. Cheers to a bright 2017.

Seeing YOURSELF should be a daily occurrence, like looking in the mirror.

As of recently, I have gotten interested in tarot cards and readings, mainly due to its link with my latest creative writing endeavor, and have become oddly invested in it. I am one who loves things like MBTI and Moral Alignments, and the multiple interpretations of these cards fascinate me. In most tarot decks, there lays the tarot card called The Tower. Depending on whether it is drawn upright or reversed holds multiple meanings. The message can also vary due to the tarot reader, deck and person receiving the reading, but in the end, there a few main themes seen within this card: change, upheaval, revelation along with fear of disaster. Looking back through 2016, I feel as if The Tower totally encompasses a large part of it.

I hate to admit it, but Kylie Jenner was right about one thing this year: 2016 truly was the year of realizations. Throughout this year, I’ve learned a lot about myself, the person I used to be and the person I want to be. There is still much for me to learn, but the list of realizations this year hold a larger weight than past ones. It may be due to the fact that I am reaching adulthood in just a few years, or the fact that I am in my senior year of high school and the pressure of the future looms over me, but things have changed, I have changed. Compared to the past, where I have always felt as if the years pass quickly, but the last year wasn't the case.

Dear 2016, you were an ode to change, the tower looming over me, the physical manifestation of every single problem I faced. You were filled with change and disaster, death and upheaval, realizations and revelations. You were a whirlwind of emotions, good and bad experiences and more. 2016, you were the longest year of my life to date. Filled with memorable days and nights, pink sunrises and red sunsets, sun-filled times and moonless moments.

Dear 2017, you are the chapter after The Tower. You are the quiet after the storm, the stillness and quiet in the night. You are different from 2016. Change has been and will be pushed upon me, but I will also push for change. I have grown, and I will grow. The past has been tough, but the future isn’t free of battles either. 2017, you will be better. Walls will be scalable, bridges will be burned and peace will follow, even for a few moments. And in the end, that’s all that matters.

Dear 2017, I want you to be better than 2016.All my life, I've pretty much grown up with the same friends. A few have changed here and there, but in a small town, you can't expect much. I could always count on those same friends no matter what, because no matter what happened, we lived in such a small area that even if we fought we would eventually come back to one another. This past year, a lot of that changed. I've lost friends, but I don't regret that. All my life, I've been so centered around what other people think of me and if they'll accept me that I've never wondered about how I thought of myself. This year, I've learned that spending time alone has helped me so much. It might just be because I'm an introvert, but being alone lets me think clearly and be myself, and it's something I want more of in 2017. I want to learn how to appreciate myself without needing anyone to tell me why. I want to be able to be alone without being lonely. That's such an important lesson that 2016 has barely begun to teach me. I want 2017 to be the year of me. I will not give my time up to people who only accept me as someone I'm not. I'm tired of bending backwards and letting them.

During my last days of 2016, I have been reflecting on both the positives and negatives to come out of this year. I’m spending New Year’s Eve with my girlfriend, who is someone I am so lucky to have. I wasn’t nearly as confident with my sexuality entering this year, but I have truly come out stronger and more sure of myself. I am grateful to the challenges thrown at me from school, the internet, and even my family, which have taught me something about the people in my life. I have learned to stop holding my tongue. I have learned that there are times for acceptance and times for change. I have learned to utilize what is given to me and speak out how I can. For every hardship we have faced, we have overcome. We have learned to grow when weeds have gripped our throats. We spoke even when we were tired. We have cried from laughter and from devastation. We have kept loving. This past year has undoubtedly been one stress after another, but our generation always found peace. Through social media, protests, and art, we have never ceased to let injustice pass by. We are millennials on the move, and we will never let up. I hope 2017 is as loving and passionate as we are.