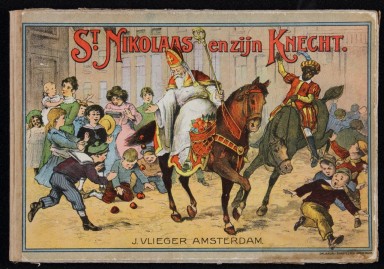 In Holland tonight, families and friends are sharing gifts in celebration of the eve of the Feast of St. Nicholas.  Small children may meet Saint Nick - Sinterklaas, who visits many towns in the lead up to this festival, and many will be leaving their shoes out for him and his helper, in the hopes that they will be filled with sweets and goodies as a reward for behaving well this year. If you’re impatiently waiting for Christmas, the idea of this early celebration may appeal to you. But this Dutch tradition has a much darker element to it. There is a servant figure who accompanies Saint Nicholas on his rounds, known as Zwarte Piet - Black Pete. In towns across the Netherlands, today and in recent weeks, white men have donned blackface, complete with the caricatural afro wig, smiley exaggerated lips and gold earrings, and joined portrayals of Saint Nicholas in community celebrations.

Early stories of St. Nicholas’ present-giving suggest that he was accompanied by a devil who was forced to work with him. At some point in the time of slavery, this morphed into a depiction of an enslaved black man - a scary bogeyman figure who was cruel and whipped children who did not know their prayers, but was docile towards Santa and happy to help him. This depiction was first printed in a children’s book in 1850, 13 years before the abolition of slavery by the Netherlands. The character’s role is to encourage morality in children, but this character has instead helped to sustain deeply ingrained racism in Dutch society by overtly encouraging it from infantry.

The blatantly offensive and oppressive nature of these portrayals is seen clearly by many, but not a majority of Dutch people. In 2013, Dutch pollster Maurice De Hond found that 91 percent of Dutch people feel that they should not change the tradition to suit “the taste” of a minority and 81 percent opposed changing Pete’s skin colour. In 2014, Prime Minister Mark Rutter said, “[the tradition is] not green Pete or brown Pete - it is Black Pete, so I cannot change that”. A popular defense of this tradition is that Pete is not black because of his race, but because he goes through chimneys to deliver presents and gets covered in soot. From the history of Black Pete’s character, this is clearly false.

Opinions may be changing, as an international audience becomes more aware and outraged by the portrayal of Black Pete. Some progress is also being made, which could reflect change from the opinions represented by the 2013 statistics discussed earlier. In recent years, efforts have been made to remove the minstrel-like features from Pete and turn him into ‘Chimney Pete’, who is coal covered but not painted black. It would seem progress was made this year as Chimney Pete replaced blackface makeup in  Amsterdam’s celebrations this year.  However, the black-streaked character who submits to the benevolent white man is still deeply problematic; this ‘solution’ simply provides a reincarnate version of Black Pete and refuses to recognize the faults of the original character.
.
blackface currentevents racism vita