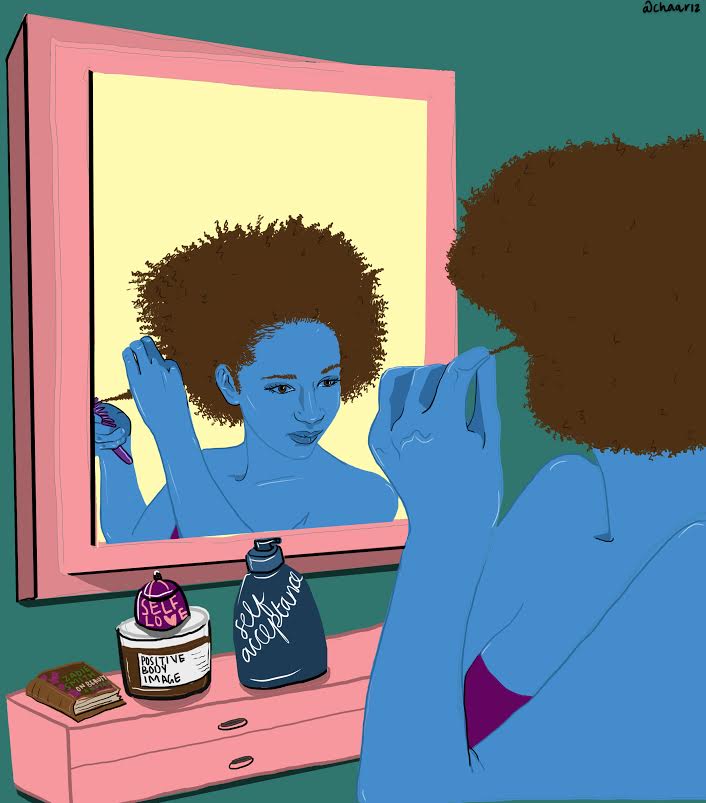 Art by: CJ
Article by: Cia

I’ve looked up to Zadie Smith ever since reading her book, NW, at the beginning of this year - something to do with those high cheekbones, or the fact that I take the bus through her North-west London neighbourhood often - so when I came across her interview with Jeffrey Eugenides in the New York Times last month, I couldn’t help but smile a little. Zadie Smith is an English novelist/essayist/short story writer/all-round girl boss from North-west London. She’s written five novels so far. You can find out more about her here.

According to the interview, Zadie Smith refuses to allow those who compliment her to live under the delusion that she’s perfect. When commended upon a new hairstyle, she ‘thrusts a Cleopatran braid in [your] hands and says, “Extensions.”’ Later on in the same interview, she also talks about how “men have never noticed toenails or fingernails on women.” The interview highlights Zadie Smith’s disregard for the kind of photoshopped, thigh-gapped beauty found in mainstream media today. Instead, she is described as being ‘Nefertiti-faced’, but also slightly snaggle-toothed. Somehow, she manages to embody one of the most beautiful women in ancient history, but remains almost soberingly flawed. Zadie Smith lives according to her own standards of beauty.

Seem familiar? Beauty standards have exploded into the conversation over the past few years - we’ve had Dove campaigns and Tumblr posts reminding us to take time to love our stretch marks, our acne, our scars, and our hairiness.

The juxtaposition of her Nefertiti-face and her slightly snaggle-toothed smile - and the rest of the interview - led me to think about how Smith addresses body image and the like in her own writing. The first examples that came to mind were Kiki and Zora, the mother and daughter duo in her third book, titled On Beauty. In my copy, I’ve highlighted a paragraph about Kiki’s attempt to prevent fashion magazines of any sort entering their household because she doesn’t want Zora to spend her teenage years hating herself. Despite Kiki’s efforts, Zora still ends up feeling insecure about what she wears and what her fellow students think of her, despite the fact that she’s incredibly smart.

Funnily enough, Kiki ends up feeling as just as insecure as her daughter. In the same book, Kiki begins to doubt herself after she finds out about her husband’s affair with someone significantly smaller than her. When she confronts him about it, he replies with ‘I married a slim black woman.’ Kiki begins to believe that her weight gain was the real reason for her husband’s infidelity. This insecurity isn’t an old one: Kiki has always felt out of place as a plus-sized black woman in a predominantly white community.

Somehow, Zadie Smith manages to make the somewhat heavy idea of being unhappy with one’s appearance less serious - humorous, even. Irie Jones (of Smith’s first novel, White Teeth) hates her ‘Jamaican figure’ and the kinky hair she inherited from her grandmother. In an attempt to impress Millat Iqbal, who she’s madly in unrequited love with, Irie straightens and dyes her hair. It ends up looking absolutely awful, and Millat tells her this, reminding her that her ‘old hair’ was beautiful to him. If you’re in the UK, do watch the televised version of White Teeth on Channel 4 On Demand: the moment when Millat rips out Irie’s blonde weave is one of the most underrated (yet truly iconic) moments on British television.

In Zadie Smith’s recent novel, Swing Time, the theme of body positivity and being insecure in one’s skin is less apparent, but it’s definitely still there. In fact, the narrator’s best friend Tracey is literally insecure about the skin she’s in. Tracey constantly compares her skin tone to the narrator’s, priding herself on the fact that hers is a slightly lighter shade of brown (since they’re both biracial).
I feel like having real-life struggles - especially the uglier, more personal ones - represented in literature are incredibly important. Since body image is easy to talk about in a general manner, but a whole lot harder when it comes to opening up about your own personal experiences with it, I think that it’s reassuring to read of characters thinking and doing the same things you’re doing or have done in the past. Zadie Smith’s underlying message about unconventional standards of beauty is a message that is important to all of us in moving forward towards self-love and acceptance.
beauty standards body positivity books cia cj calanday self love zadie smith